00:00 - The band fades in, shuddering and shimmering into life. One guitar feels its way carefully towards a melody, almost hesitant, as if the song is already there and they just need to reach it. The other guitar provides the rhythmic pulse, as the drums are all controlled chaos and texture.

00:54 - One of the most arresting opening lyrics in recent memory - establishing a firm sense of place, but refusing to fix a time: "England was aghast / Hallucinating future kings from its football teams, and its Viking past." The bass anchors the vocal melody, while the other instruments - as if subservient to the voice - keep edging their way around it, etching in the space.

01:27 - The voice begins a skyscraping section of the verse - as if to bear it aloft, the drums create a tumult, almost a free-jazz rumble, retreating again as the vocals return to earth.

01:56 - The vocal melody takes yet another, lower turn. The drums take the high ground, chattering with light cymbal taps, as the guitars seem to finally assert themselves - the lead line following the voice note for note, while the vibrations of its pulsing partner emerge a little further (think of a less obtrusive 'How Soon Is Now?' judder).

02:30 - About one note before the verse can resolve, a medieval-sounding organ pipes up with a brand new hook, silencing everything we've heard so far, until - again, about a note away from the point you'd expect -

02:44 - The band suddenly takes over again, rocking the original melody, with the drums finally playing a sturdy beat as the guitars - now non-identical twins - seem to take simultaneous solos, pushing the tune further into its own corners. However, the previously dominant voice leaves them to it - as if it's left the room for a bit and the group can let themselves off the leash.

03:40 - The vocal returns with the same lower section as at 01:56, and brilliantly, the band fall back into submission, with the lead guitar slightly more forthright in tracking the voice. However, the seeds of rebellion remain, as the 'pulsing' guitar from before is now a distorted depth-charge, running a steady stream of 'fuzz' beneath the singing, like a coiled spring.

04:11 - Sure enough, when the section reaches the same 'unresolved' end, said guitar steals the lead, playing the organ figure from before. Gradually the rest of the band re-join it, the 'old' lead guitar building up a gradual rhythmic head of steam, drums shuffling, and the bass taking its turn higher up, dancing around the vocals ...

04:28 - ... which usher in a completely new tune over the guitar line, a call-and-response upbeat litany between the lead singer and her colleagues. Whatever increasingly angelic leaps the voice takes, it takes a turn back down towards the others when they join in. Finally, at ...

05:19 - ... the very first lines return over an echoing signal - but slow to a halt a few phrases in, again unresolved, as the song ebbs away.

'England Was Aghast' is the second track on the new release from Trembling Bells, a mini-album called 'Wide Majestic Aire'. You may remember my enthusing greatly about their full album from last year 'The Sovereign Self' - and on the surface, the latest record is a kind of companion piece, containing songs of similar vintage to 'Self' but not quite fitting in with its vibe. For a 'mini' album, 'WMA' is actually a generous helping - over half-an-hour, with seven songs that are (on balance) a bit shorter than the eight epics on 'Self'. I also believe that 'WMA' is very much its own thing, and that anyone tempted to pass over it as if it was a glorified EP or bundle of out-takes would be making a very serious mistake...

Creatively, Trembling Bells are constantly moving forward. When they first started touring 'The Sovereign Self', I think I counted one older song in their set. At their most recent London gig, the oldie had disappeared, and we heard two songs so new, they aren't even on 'WMA'. Even their debut album 'Carbeth' took its folk-rock starting point into early/classical (thanks to Lavinia Blackwall's gorgeously versatile voice and suitably sacred organ) and jazz (courtesy of Alex Neilson's unconventional songwriting and infinitely subtle drumming). By degrees, their sound has expanded with their ideas, until 'Sovereign Self' launched into a near-prog style - it was as if the band had achieved a kind of lift-off, the songs vaster in scale and scope, arrangements now full-to-bursting but with idiosyncracies intact.

But 'Wide Majestic Aire' is a different beast. The title track has been around for some time and, in line with their usual tendencies, they've played it live for a while. When I first heard them perform it, I couldn't hear all the lyrics and had no way of knowing if 'Aire' had an 'e' on the end or not. Its stately, anthemic progress certainly suggested to me that it might be about music itself, a song celebrating songs. Now I've been able to listen to the track more intimately, it feels like Alex N has managed to write simultaneously about the river as a real place, and as a metaphorical channel (ho ho ho) for the creative impulse. Twin muses are present - mother and lover - as well as places (Yorkshire, Oxford) and artistic influences (Larkin, Blake, Lorca - and further on, Turner).

The three poets mentioned seem particularly fitting, in that Bells songs inhabit a realm with room for the personal and mundane alongside the phantasmagorical and surreal. (It reminds me how drawn I am towards bands and artists that seem to create their own 'universes' - see also the Handsome Family, Sieben, Espers, Clutch...) Every song on 'WMA' explicitly cites one or more real places, but the words blur time like a lyrical TARDIS, with folkish natural references colliding with hard contemporary images (in 'Show Me A Hole' a butterfly meets its end on a riot shield). It's as if a band from the future is creating/reviving new folk music based on our present. The way AN manages to meld this intricate framework to ruthless self-examination knits the record together. 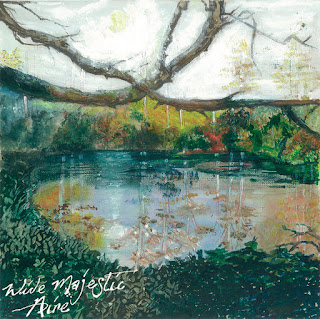 'WMA' - setting it apart from 'Sovereign Self' and treating it as a 'whole' work in its own right - seems to show a band embracing its myriad different selves. That debut, 'Carbeth', haunts the record - most explicitly in the beautiful sequel track, 'Swallows of Carbeth' - but neither the girl nor the birds in the song are 'coming back'. The early music influences from that album resurface here, in particular the organ sound: in two instances, its ancient strains are taken over, then assimilated by modern instruments - the guitar making it redundant in 'England Was Aghast' (as I detailed above) or in 'Show Me A Hole', when after the entire lyric is sung over the organ, the band simply pick up on its trilling hook and blast through the outro. Only in the eerie 'I Love Bute' does the swirling keyboard reach the end of the song unscathed.

Even the sequencing reflects this push and pull between 'old' and 'new' sound. The penultimate track, 'The Day Maya Deren Died' is the latest in Alex N's occasional series of unaccompanied vocals, but cleverly forms part of a narrative into the closer 'Marble Arch' - probably the most 'rock' arrangement on the record (piano replacing organ, a searing guitar riff acting as chorus). By the way, if you buy 'WMA' on disc, there are six tracks - you'll need to visit your download provider of choice to get 'The Day Maya Deren Died', and I can't urge you strongly enough to place it correctly, as track 6 between 'I Love Bute' and 'Marble Arch', before playing.

It's important to stress, I think, that 'Wide Majestic Aire' is a beautiful listen. Where 'The Sovereign Self' surged, this seduces. The songs are generally slower, wanting you to tarry rather than tearing off, and the sparser instrumentation thrusts the melodies forward. Lavinia B has arguably never sung better - always something akin to perfection, her technique just feels extraordinary: her leaps up to the stratosphere in 'Swallows', followed almost immediately by near-conversational low tones with no hint of 'transition' or any interruption in the flow of the notes. The way she can still sound delicate while slicing through the organ chords in 'I Love Bute'. My favourite moment in the title track is during some alternative lyrics for the closing chorus repeat: at one point she sings 'time, it took its toll', letting the phrase fall silent - but at the same point in the melody the following time she sings 'a revenant in flight' - and she makes the word 'flight' last, soar without breaking, into the next line.


I laid the detail of 'England Was Aghast' before you at the start of this post, simply as a way of showing how Trembling Bells are one of the most ideas-rich, interesting bands around, how much care they take over the arrangements, and how it's possible to keep listening and just find more and more references, connections, sparks of genius.

On this latest release, they've deliberately referenced not 'the' past, so much as their past, shining a light directly onto 'Carbeth' as if to shorten its shadow. So much of the album demonstrates their 'wide, majestic' new sound finding room to absorb and make use of their early features; so many of the lyrics conjure up a unique 'now/then' mash-up. It doesn't feel like nostalgia, or fall-back; it exudes so much exhilarating confidence, it's more like a reckoning. It's a wonderful experience for this listener, and long-time fan - it underlines how I love the band they are today as much as I love the band they were then.