Although I've been a few times now - especially if you count the concerts given in the church as well as the hall - I still find going to hear music at Temple quite a surreal experience. The 'Inns of Court' (for readers unfamiliar with London lore) are small areas of London containing the 'chambers' where barristers live and work - suffused with arcane city atmos, they tend towards a mix of beautiful old architecture and green space in relative seclusion. They effectively run and police themselves and, indeed, at the weekends are generally shut off from the eyes of the general public. (Once I was following a 'London walk' in a book, and got trapped, lost, inside one of the Inns for well over half an hour, until I could find my way out again. I remember thinking, "I probably won't actually expire in here, but if I'm breaking any laws - this lot will know.")

Two Inns - Inner Temple and Middle Temple - co-exist in one overall 'Temple area', which also contains two gorgeous venues. So, inside what feels a bit like a kind of tiny walled city - a secret that luckily lots of music-lovers happen to know - the brilliantly-named Temple Music Foundation (backed by a small army of sponsors and supporters) can put on a substantial series of mouthwatering concerts every year. Once, at Temple Church, we saw the Hilliard Ensemble sing one of their final gigs with Jan Garbarek - unforgettable - but on the other occasions we've been, the venue has always been the remarkable Middle Temple Hall - which looks like this: 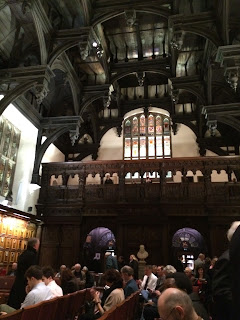 It's a fantastic place for song recitals. Not only are the acoustics marvellous, it's a 'wide' rather than 'long' room, so to speak: the audience stretches out to the sides and as a result, quite a large proportion of the audience can feel reasonably close to the stage. Here's our view (I love it when I manage to sit a little to the left of centre - good keyboard sightline!): 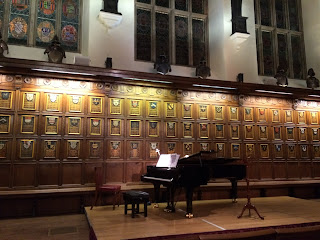 I was particularly hoping for good seats for this particular concert, as the performers were mezzo-soprano Alice Coote, accompanied on piano by Julius Drake. Regular readers of this blog - thank you, darlings, thank you - will know what a huge fan I am of both these artists. Not only that, the programme they had put together was irresistible: lieder by Schubert and Strauss, followed by a chance to hear Elgar's 'Sea Pictures' in its voice/piano version. (It's more familiar as a work for voice and orchestra - AC has a very up-to-date association with the suite, performing it with the Hallé Orchestra at the 2014 Proms, and subsequently on one of their most recent discs.)

Schubert had the whole first half to himself. The selection made by the duo seemed tailor-made to show AC's command of character and mood to its fullest. Renowned for her versatility, not least in taking on both male and female roles (I previously wrote about her remarkable Handel recital, 'Being Both', where she performed arias for the two sexes), she can switch at will between tender, delicate, fearful, resolute and threatening personas. Here, we were able to properly appreciate the way she manages to do this with both face and voice.

For example, in 'Der Tod und das Madchen', she captures the terrified girl with both expression and tone - and then, as the 'voice' of the song shifts from the girl to Death, you can see the cloud come over her brow, her stare towards the audience grow more intense, and hear the icy steel enter her voice. Yet because death benignly attempts to comfort the girl, AC still manages to end the song with a poignant (and audible) smile. We're taken on an epic emotional journey in these eight lines.

We also heard the famous 'Erlkönig', Schubert's setting of Goethe's horror-poem about a father and son galloping home through the forest - the boy is terrorised by the 'Erl-King' (who apparently only he can see), but the father chooses to comfort him by insisting its just the wind and shadows. At journey's end, the father discovers that his son is dead - his spirit taken by the supernatural being after all. The song itself hurtles along with the horse' gallop, and the singer must tell the story and portray all three characters (the boy near the top of the vocal range, the father near the bottom, and so on). Again, AC not only makes them all utterly distinct vocally (her whispery sheen overlaying the Erl-King's speech was especially chilling) but is able to fully act the son's terror, the dad's obstinacy and the spirit's evil allure - all with the eyes, supported by subtle changes in stance and posture (son on the backfoot, Erl-King forward, beckoning). Also worth saying that JD played a thrilling accompaniment, which has to be fast and frantic - but never so loud or unhinged that the singer is overwhelmed. The balance felt exactly right here.

The Strauss selections culminated in two beautiful settings of John Henry Mackay verse, 'Heimliche Aufforderung' and the celebrated 'Morgen!' As the programme note mentions, much of Mackay's (pseudonymous) writing championed homosexual freedom, and these two poems - especially in Strauss's settings - exude the twin forces of suppression and release, the sheer beauty of 'Morgen!' attaining an almost ecstatic stillness. In the former, as the moment of assignation approaches, the vocal almost seems to calm down as the piano (representing inner urges, perhaps - bodily desire?) surges and soars at the prospect of the meeting. In these performances, the particular telepathy this partnership seem to share was well in evidence - the pauses in 'Morgen!' saying as much as the notes - and how well-suited AC's mezzo is to songs of freedom versus constraint: a perfect fit in timbre and temperament. 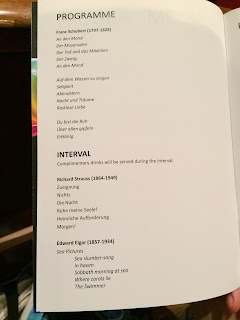 The 'Sea Pictures' were exhilarating and exciting - AC as solid as a rock in this repertoire, directing her soaring voice in all direction across the hall like the beam of a lighthouse, with JD's swelling waves buoying her up. While this duo are one of the most 'equal' recital teams I've ever heard, it's in this part of the concert that JD doesn't just get to represent the sea - he's being the orchestra being the sea, and his swelling crescendos are truly heartstopping. While - if I had to pick favourites - I would take the first picture, 'Sea slumber-song' with its stately lullaby, to my desert island, there can be few more blisteringly powerful recital endings than the final climax of the final piece, 'The swimmer', and the accompanist lifted his hands to reeling, rapturous applause.

But as ever - he's my favourite composer, after all - my thoughts wander back to Schubert. We were treated to 'Nacht und Träume', surely one of his most widely loved and performed masterpieces. It struck me how used I was to hearing versions by sopranos, or baritones at their most hushed. Both seem to give the song an angelic, ethereal air - a kind of gossamer gentility - which, don't get me wrong, makes for beautiful listening. Tonight, however, felt like a revelation: JD's soft but not sentimental pulse, the deft rhythm necessary to conjure up an image of sleep - all underpinning AC's warm vocal - this was the sound of active slumber, comfort and calm, depth and darkness. As the song ended, I had one of those moments of rapture where I thought I would never hear anything quite as perfect again - so right did this interpretation feel. (It made me wish fervently that the pair might one day release a CD of 'stand-alone' Schubert lieder. We have a 'Winterreise' so far - and it's one of the best, I believe - but to my knowledge they've not released any Schubert since. We need more!)

Temple being the strange, off-world place it is, we floated out of the concert, and let ourselves out of one of the locked exits, into the ordinary, public, unmusical night.