Sequels certainly come round more quickly these days. Following my first post of the year covering my recorded highlights from 2015, I'm now stimulating the memory cells to conjure up my top 15 live musical experiences.

I can tell it's been a fantastic year, partly because of my horror at some of the recitals and concerts I've had to leave out. Some of my favourite composers and artists have been dramatically edged out - but then the list is a cruel tyrant and is not here to show me mercy. It's to remind me how privileged I am to have heard and enjoyed so much brilliant music. In particular, this lot - in chronological order...


Christopher Ainslie, James Baillieu, Gary Pomeroy (Wigmore Hall)
A January highlight that still stands head and shoulders over much of the year, this extraordinary recital from countertenor Ainslie featured 'songs of night and travel', allowing him to range from Schubert and Wolf to Bridge and Vaughan Williams. Inspired by what Ainslie felt was his own nomadic statelessness, the high register of the voice - hinting at fragility but utterly confident - was the perfect vehicle to convey his personal investment in the songs. 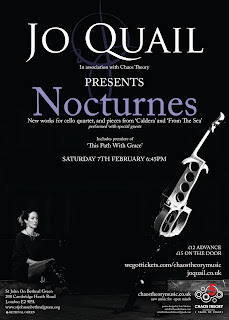 Jo Quail and friends (St John on Bethnal Green)
Between albums, cellist-composer JQ - a very familiar name to Specs disciples (Spectacles?) - put together a very special concert that it's hard to imagine anyone else even dreaming up. The evening was primarily built around the live premiere of her 20-minute masterpiece for strings, percussion and choir, 'This Path with Grace'. But we were also treated to cello-quartet covers of some of her favourite music - from Bartok and De Falla to Van Halen and Nine Inch Nails - and ramped up versions of her solo, looped composition. A journey round a unique talent.

'The Mastersingers of Nuremberg' (English National Opera, originally for Welsh National Opera)
Making five hours go by in a flash and a sausage baguette, this magnificent production featured a stunning performance of Hans Sachs by Iain Paterson - not only with the voice but even in moments of physicality and poignant silence - against a visually vibrant and relentlessly witty production. Plus - almost goes without saying at ENO - gorgeous work from the chorus and orchestra under Edward Gardner. 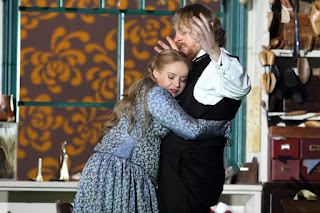 'Die fliegender Holländer' (Royal Opera House)
More Wagner, this time a mystical, muted affair at Covent Garden which fully allows for the possibility that the heroine - already obsessed with the Flying Dutchman legend - imagines the whole thing. It makes for a fascinating psychodrama, completely sold by the charismatic conviction of the two leads. Bryn Terfel, made for the Dutchman role, elusive and menacing, embodied the thrilling, but threatening escape Senta can never quite grasp. And Senta herself was brought to life with great spirit and sensitivity by Adrianne Pieczonka, one of the performances of the year.

'Krol Roger' (Royal Opera House)
I felt this was a real triumph for the ROH - a captivating and haunting score (by Szymanowski) , a strange and production and a superb cast. Again, we were almost certainly inside the mind of the main character - as literally expressed on stage by a huge head with chambers large enough to enact scenes from the opera inside it. As the King (in a terrific central turn from Mariusz Kwiecień) undergoes his spiritual crisis, dancers writhe around his brain like electric synapses, until he emerges from his dark night of the soul in glorious affirmation.

'The Queen of Spades' (English National Opera)
Edward Gardner, again marshalling the unstoppable ENO orchestra and chorus, uses his and their considerable powers for evil, as Tchaikovsky's terrifying adaptation of the Pushkin ghost story came to surreal life in eerie colours and images. I loved everything about this production: it was visceral and macabre, but left the sensation to the increasingly oppressive music as the plot ground on to its twist-in-the-tale conclusion. I particularly enjoyed Peter Hoare as anti-hero Hermann, using his angular tenor to sound sinister and strung-out. A brave and unsympathetic performance, balanced by a fearsome opposing cameo from the great Felicity Palmer in the 'title role'.

Wovenhand (Scala, London)
An incendiary performance from one of the best US bands, made all the more precious by the infrequency of their visits. Incantatory Americana - sounding like a kind of heavy, brooding, scorched-earth Bad Seeds - led by the shamanic David Eugene Edwards, whose lyrical themes of Biblical wonder, mixed with ritualistic signs and movements on stage, make the group such a compelling presence on stage as well as on record.

'A Poet's Love' (St John's Smith Square)
A weekend of pure joy, as tenor James Gilchrist and pianist Anna Tilbrook expanded on their most recent recording project - the three great Schumann song cycles 'Liederkreis' (times two - Opuses 29 and 34) and 'Dichterliebe' - to create a mini-festival of five concerts featuring more song and chamber music by both Schumann and Mendelssohn. A masterstroke was to bring in Carolyn Sampson alongside JG to perform Schumann's 'Myrthen' collection of songs - one can only hope for a follow-up disc with CS helping the duo 'complete the set' on record.

Trembling Bells (Café Oto)
To launch their album - which happens to be my rock CD of the year - the Bells took over this intimate venue for a two-night festivalette - a little bit like a mini-Meltdown (which, given Oto's soaring temperatures is all too appropriate!). So, we not only heard barnstorming sets from the band themselves, but also guest appearances from, among others, Martin Carthy (yes!), Alasdair Roberts and a special enthusiasm of mine, Crying Lion - a spin-off group who mostly sing feverish unaccompanied folk, featuring Alex and Lavinia from TB, along with Katy and Harry from Muldoon's Picnic. A sprawling, barely hinged affair - wholly appropriate for their full-to-bursting sound.

Trio Mediaeval (Wigmore Hall)
Could their be a better atmosphere than late night in the Wigmore Hall for a group of women who can sing like this? They were performing their latest programme (based mostly on the recent CD, 'Aquilonis') ranging from centuries-old sacred music from Iceland through to contemporary pieces. As with the previous time we'd seen them, they processed around and behind the audience in stately fashion, filling the air around us with their voices, underpinned only by their trademark melody chimes. Unforgettable. 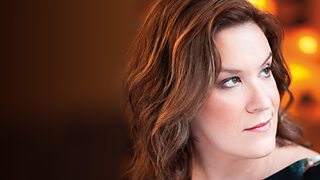 Alice Coote's 'Being Both' (Royal Albert Hall)
The first of two Proms to make my list, this bravura performance from mezzo-soprano AC showcased her ability to play both male and female operatic roles through a specially-chosen selection of Handel arias. Part of AC's genius idea was to use a sparse collection of props and reject a flamboyant concert gown in favour of a simple black trouser suit, so that the recital also doubled as a powerful artistic statement: how the singer who becomes adept at these 'trouser' roles can spend much of their working life 'suspended' between the sexes, and what effect this might have on their artistic approach. With sympathetic backing by the English Concert, most of all we were able to focus on that beautiful, brilliantly versatile voice.

Yo Yo Ma (Royal Albert Hall)
'Single instrument Bach' was a running theme at the Proms (the Goldberg Variations and Sonatas/Partitas also got an airing), but surely this was the most singular effort of them all. Yo Yo Ma had undertaken to perform all six of Bach's Cello Suites in one evening, with no interval. (In fact, he had a very short break between 3 and 4, but we all stayed put.) Clearly, the outcome - deliberate, I'm sure - was to place us all in a kind of special 'zone'; 2.5 hours of some of the most perfectly conceived music ever written, with the cellist playing from memory, so channeling these pieces directly to us... it was almost trance-like, except we were all concentrating, savouring each moment. A total 'Proms experience', somehow shrinking the entire Albert Hall to a transfixed audience sat round a man in a chair, watching and listening to his every move.

Anna Caterina Antonacci (Wigmore Hall)
This lunchtime recital was well worth the day's leave necessary to attend it! After seeing the powerfully charismatic ACA sing in concert with the ROH orchestra, there was no way I wanted to miss out on this perfomance of Poulenc's one-woman opera-in-miniature, 'La voix humaine'. Normally performed with orchestra, this gig had the twin coup of seeing ACA in such an intimate venue, plus hearing the piano-only version of the piece. One side of the final conversation between a woman and her former lover (now with another), the soprano usually acts out the role with, crucially, the phone as her key prop. As she keeps getting cut off and the operator calls back, the piano trills the phone's ring. ACA, in gorgeous voice, constantly mobile and agile, her face travelling from euphoria to despair and all expressions between, was the consummate singer-actor.

Angela Hewitt (Royal Festival Hall)
Just a magical performance which seemed to give a snapshot of the many facets of AH's playing - two pieces by Bach (the subject of perhaps her most wide-ranging survey of works for Hyperion), and a second half devoted to more recent or ongoing concerns of Beethoven and Liszt. However, the revelation for me was a trio of breathtaking Scarlatti sonatas - happily the focus of a new disc she's due to release shortly. An unashamedly upbeat and enthusiastic perfomer, the exuberance and brio of these works made an indelible impression on me. 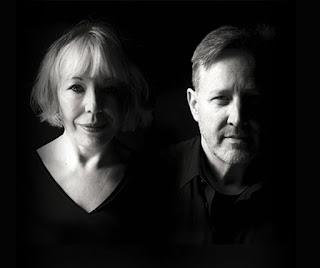 Barb Jungr and John McDaniel's 'Come Together' (St James Theatre)
We finish with Cavern-based cabaret, as a perhaps slightly odd couple tackle one of the most imposing catalogues in modern music: the Beatles. Barb Jungr is one of our finest interpreters of popular song - rooted in jazz but in fact able to transform any tune, particularly those written or performed by men, into a sometimes bruised, sometime brittle, but always beautiful anthem. John McDaniel is a celebrated US arranger, and, it turns out, a rather special pianist. Their across-the-pond rapport is hilarious and pin-sharp, and they're not afraid to move away from the 'hits' and include numbers that deserve a wider hearing. Even Beatles songs are happy to join an orderly queue to be sung by this voice. The kind of gig that has you skipping out of the venue.