Happy new year to you, and welcome to the Specs 'round-up' of 2015 - part one. This year I thought I'd mix genres (so that people who like a bit of everything might come across something different) - so here are my 'recorded' highlights, covering CDs/downloads (including reissues) from both the classical and rock/folk worlds. I'll follow this up with a second post recalling my favourite 'live on stage' memories from the year.

I hope you enjoy it and - ideally - discover a new artist, band or composer to love.

(Quick digest for specialists - with my CDs of the year in bold type...) 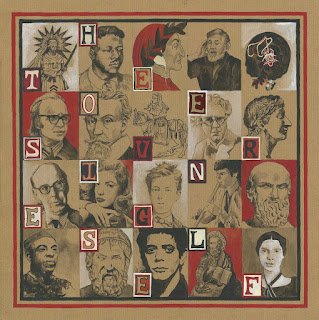 Beirut: "No No No"
Thrilled to see one of my favourite bands return in 2015, with a glorious, slight swerve of a record. Short, delicate and with less of the just-about-hinged clutter of some older material - here we get a focus on piano and drums. At times, both stately *and* slinky, as on this track, 'So Allowed'.


Ian Bostridge, Julius Drake: 'Songs by Schubert - 2'
The ongoing 'Schubert live at the Wigmore Hall' series from this duo continues to pay dividends with brilliant programming as well as performance. I thought the first CD was one of the great live albums in any genre, but this sequel has exhilarating moments even surpassing that, including a superb closing run featuring this track (Schubert riffing in his most sprightly fashion) along with 'Atys', 'Nachtviolen'... oh, just get it, it's fantastic. (I could only find a studio version of 'Fischerweise' to include here, but no matter!)


Calexico: 'Edge of the Sun'
Sometimes I feel a bit guilty for taking Calexico's scorched Americana for granted, but then they come along with the brilliant idea of adding the 'we-found-him-in-a-cave' whisper of their old mucker Iron & Wine's Sam Beam to their vocals on this track... and it reminds you how individual and precious they are. A lovely, but again slightly low-key album... I'm aware that really rating this and the Beirut record this year is almost certainly no coincidence.


John Carpenter: 'Lost Themes'
Who could've predicted this treat? In an era of cool retro electronica and resurrected soundtracks, the man on earth most able to scare you witless with both a movie camera and a synthesiser reappears with an album's worth of 'fake' film music. Take this superb opening track, 'Vortex', which will probably have you checking the corners of your laptop screen for agile shadows or sudden disturbances.


Clutch: 'Psychic Warfare'
A tight funk outfit trapped in the bodies of a metal band, Clutch are now decades into their existence but show no signs of running out of incredible riffs or whip-crack beats. I love the fact that even an in-your-face groover like this track, 'A Quick Death in Texas' - flirting with both Zep and ZZ Top - reveals more riches with each listen. An array of hooks - one for verse, another for chorus, another for middle eight, and a slightly warped version of the chorus riff for the outro; excellent use of the rock 'n' roll "Hey! Hey!"; gratuitous cowbell; and some born-storyteller imagery ("The saloon door stopped swinging / The piano player stopped playing"). One of their best albums in years, overflowing with ideas. Mostly noisy ideas.


Alice Coote, Graham Johnson: L'heure Exquise
A terrific year on record for mezzo Alice Coote - one of our finest, most involving and at times, intense performers - releasing a 'Sea Pictures' CD with the Hallé Orchestra and a superb disc of Schumann with pianist Christian Blackshaw. But on this gorgeous Hyperion album with Graham Johnson, she presents a selection of French mélodies that make full use of her astonishing emotional - as well as vocal - range. Bringing in a hint of the 'chanson' where appropriate, she's not afraid to temper the sheer beauty of the sound with mischief, seductiveness or ennui. A treasure trove.


Golden Void: 'Berkana'
This heroic track, 'Burbank's Dream', is a typical - and typically glorious - example of Golden Void's psychedelic rock. As out of their time as you'd expect from a band named after a Hawkwind track, the atmosphere is so thick, it feels like you're listening to it through smoke - and extra points for vocals that sound to me as if they're 'informed' by the marvellous Gary Brooker of Procol Harum. Prog-standard!


Bert Jansch and John Renbourn: 'Bert and John'
All of Bert Jansch's early records are being reissued. Great news for fans of spectral acoustic fingerpicking, clearly, but it also means I've finally got myself a copy of 'Bert and John', the informally named collaborative album Jansch made with John Renbourn, in their pre-Pentangle days. This track ('The Time Has Come') just has the pair take a channel each - the guitars miraculously dancing around each other as the voices gently harmonise. The art of sounding diffident, while knowing exactly what you're doing.


Myrkur: 'M'
Interesting stuff, this - Danish singer-songwriter Amalie Bruun, already successful in solo and band careers, decided to create an alias to record some of the music she really loves: black metal. While not without its ethereal touches (occasional passages of choir and piano make you wonder if this is what would result if Enya had grown up listening to Darkthrone), it's mostly a thunderous gallop of rumbling drums and buzzsaw guitars: totally true to its inspiration but not compromising other aspects of its creator's talent. An intriguing grower, recommended.


Mark Padmore, Kristian Bezuidenhout: 'Beethoven / Haydn / Mozart'
I'm desperate for this partnership to get together as often as possible and just record MORE STUFF. MP's measured, serene tone and KB's ringing fortepiano are a perfect match and produce a kind of jointly celestial sound. After a disc of mostly Schumann song, they seem to be gathering repertoire as well as pace and released this wonderful CD of the story so far. Here's LvB's 'Adelaide'.


Adrianne Pieczonka, Brian Zeger: 'Adrianne Pieczonka sings Strauss and Wagner'
AP is one of my favourite operatic performers, so any CD is most welcome. But this was a particularly exciting prospect, featuring songs by composers with whom she seem particularly at home on stage. It doesn't disappoint - she's in glorious voice: here's Wagner's 'Träume':


Rachel Podger: Biber 'Rosary Sonatas'
Slight red herring, this example (it was all I could find on YouTube) - as RP is playing the solo Rosary Sonata which originally appeared on her earlier CD named after it, 'Guardian Angel'. This year, she released a double album placing it alongside all the other Sonatas on it, too - so *imagine* how good that is. Surely one of the most accomplished Baroque musicians ever.


Jo Quail: 'This Path With Grace'
This cellist-composer - a very familiar name to Specs regulars, I'm sure - continues to push her writing and playing in unexpected, exhilarating directions. This incredible 20-minute piece, is scored for cello (Jo's electric instrument alongside a squad of traditional acoustic cellos), percussion and choir. From the opening blasts to the all-encompassing voices, you'll be transfixed as the piece comes 'full circle' to its climax, taking in rock, folk, choral and classical along the way.

Dorothea Röschmann, Mitsuko Uchida: Schumann and Berg Lieder
I was lucky enough to be at one of the Wigmore Hall recital evenings where this album was recorded. The duo have a fascinating dynamic in performance: extraordinary empathy (it struck me that it was all too rare to see a two-woman recital partnership, but could that have an effect?) and in some ways a reversal of the norm, with MU more likely to be the firebrand in perpetual motion and DR almost an old-school, regal presence. But in fact, the extent to which the pair clicked is audible: MU constantly looking from her music over towards her colleague, tracking her precisely, while DR's emotions are all filtered through her gloriously expressive voice, making this an ideal 'listening' recital. In this track (apologies if you don't have Spotify), you can hear them navigate Schumann's twist and turns as if they were a single entity.


Carolyn Sampson, Joseph Middleton: 'Fleurs'
My classical CD of the year. Carolyn Sampson ventures out of her familiar Baroque surroundings and into art song. Creatively and artistically, this is clearly a huge step - but how lightly she skipped over it. Thinking about the way she combines expressive purity of tone with speed and precision, it's a wonder she didn't try it earlier..! But one of the things I think make 'Fleurs' a truly great record is the programming as well as the performance. The duo have made a 'concept album' of sorts, with the floral link kept throughout as the track listing ranges across composers and styles, showing off the brilliantly versatile playing of JM alongside CS's 'born-to-this' renditions. I hope this is just the start of a really strong partnership (you get the impression from 'Fleurs' that their rapport is burned into the disc) and expect that future records and recitals from them will be equally as interesting and illuminating as simply, satisfyingly beautiful.


Sieben: Norse EP
Matt Howden - the man behind one-man musical phenomenon Sieben - is on a roll at the moment, releasing his forthcoming album in stages, as three quite distinct EPs. The familiar elements are there - voice, violin, loops - but with a constantly increasing majesty. Always pushing the boundaries of his chosen set-up, the current Sieben sound explores the epic: tracks of around 10 minutes each, layer upon layer of shifting sound, leaving behind a strict verse-chorus format to explore chant/mantra. This is new magic.

Andreas Staier: J S Bach Harpsichord Concertos
I first heard Andreas Staier through his marvellous fortepiano playing - particularly when accompanying Christoph Prégardien in lieder - but he's also 'rather good' at the harpsichord, and this year's Bach disc is understandably an embarrassment of riches. Listen to the full-on, exhilarating production on this track, the D minor concerto.


Swans: White Light in the Mouth of Infinity / Love of Life
One of the most intense rock groups ever, the current incarnation of Swans continue to put out vast albums, like universes unto themselves. However, in a previous life - with the band dynamic balanced between Michael Gira and Jarboe - they achieved a kind of wracked musicality. This year, the ongoing reissue series reached this pair of albums (they belong together and come in a single package) - and this track in particular seduced me back in the day and got me into them for the first time. I had to include it.


Richard Thompson: Still
As in, still brilliant. Another example of an infallibly reliable talent suddenly releasing not 'just' another great set of songs, but a record to sit alongside their best. Based around the 'Electric' trio - sounding very (a)live in a warm and sympathetic production from Wilco's Jeff Tweedy - but fleshed out with harmony vocals and tempered with acoustic touches (as on this track), it's the best of all old worlds.


Trembling Bells: The Sovereign Self
My rock CD of the year. Trembling Bells are, on the face of it, a folk-rock outfit, but they can't really be contained by that description - in the same way that their sound seemed barely kept in check by the studio or your speakers. Blessed with chief songwriter Alex Nielson's virtuosic jazz drumming (somehow keeping the beat while adding multiple shades of percussive colour) and Lavinia Blackwall's all-points-between-heaven-and-earth voice, they released a three-and-a-half minute spooky pop wonder, 'Hallelujah', for Record Story Day, along with their finest album yet, 'The Sovereign Self', where everything came together perfectly. Unafraid to stretch themselves on every track, a bewildering stew of musical styles bubble together in the cauldron - folk, country, even metallic riffage - not so much from song to song, but all the time, in the overall, consistent sound. This feels to me like my national music. Out there, but not as far as you think. A masterpiece.