Wigmore Hall is itself on a bit of a quest - to present all of Schubert's songs (note: there are over 600 of them) in a series of some 40 concerts across two years. My attempt to get to as many of these as possible has resulted - a little soberingly but also excitingly - in my latest batch of tickets arriving in a JIFFY BAG. I'm persuading myself that the bonsai rainforest of printed paper can only have been slightly too big for the normal Wiggers envelope...

However, I thought I'd definitely be missing out on at least one gig in the sequence: the celebrated baritone Simon Keenlyside - accompanied by one of my piano heroes, Malcolm Martineau - performing the Hall's Schubert Birthday Concert on 31 January. I have member's priority booking, but the concert had still sold out before my order was processed.

I was particularly vexed by the likelihood I wouldn't hear this. Whenever I've seen SK on the operatic stage, he's been utterly compelling: not just vocally, but in the intense physicality of his performances. I'm unlikely to forget his Valentin in 'Faust', damning his sister in the midst of his death-throes, or that voice still pinning me to the back of the Royal Opera House Amphitheatre through the contorted body of his Rigoletto. (SK is also one of the select group of Wozzecks to spend their final scene fully submerged in bloodstained water in Keith Warner's ROH production.)

So how does that energy transfer to a recital? I did have an earlier chance to find out when SK sang 'Winterreise' at Wigmore Hall in 2014. It was a spellbinding evening - while the sensitivity and anguish were all present and correct, the power of SK's delivery, combined with his restless movement across the stage, gave the rendition an "I'll reach the end of this journey if it kills me" flavour. (I do also remember thinking at the time that a hugely robust piano accompaniment helped generate this impression, too.) 'Winterreise' is now generally performed in one 75-minute sequence with no interval or encore - even though Schubert wrote the songs in two separate groups and didn't set the poems in the original order - and SK's relentless energy fully sustained the protagonist's character for the duration. I badly wanted to find out how this energy would be channelled in 'stand-alone' lieder, uneven bursts of two to seven minutes, in which anything could happen.

Luckily, fortune was smiling not only on the brave, but also on those obsessively checking the Wigmore Hall website for returns - a balcony seat suddenly appeared as I was, er, 'passing', and I snapped it up. Here's the evening's programme: 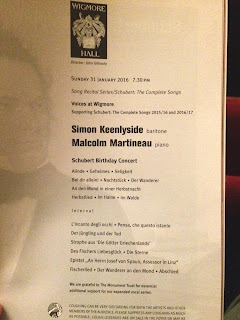 In off-stage life, SK is very much a man of the outdoors (specifically a farm in Wales), and while we weren't hearing the 'winter's journey' this time round, I was intrigued to see an over-riding nature theme tie together many of the selections and bring some lyrical unity to the recital: two other wanderers, the moon, the stars, woods and forests, fishing, autumn... This had the pleasing effect of making SK seem 'in his element' - onstage - as well as out in the elements, allowing him to fashion a character of sorts in spite of the songs' lack of narrative.

In fact, I'm now more certain than ever that, in recital, the operatic 'stage animal' in SK is still self-evident, seeking ways to be unleashed. He moves constantly - a little like an electric current is running through him, or he's generating his own energy. Whether this is self- or sub-conscious, I don't suppose I'll ever know - I suspect it's something between the two - but it always serves the delivery. His hands dart to his cuffs, or jacket buttons, or up to his hair - which could seem almost affected until you realise that, as a result, his shoulders move too, then the rest of his body follows suit, so that he's turning, even sweeping across the space.

I'm fascinated by the fact that Schubert chose to express himself so extensively through lieder - to the point of being the acknowledged master of the form. Songs are so compact in the face of the tumult of emotions the composer tries to compress into them (usually succeeding). Perhaps he felt he needed the poets' words. But with this in mind, it seems perfectly appropriate when a recitalist's mode of expression bursts out of the 'song' (that is, the voice and piano) and invades the body language and behaviour. (This is probably the only respect where I'd make a comparison between SK and Ian Bostridge - another Schubert specialist who seems to embody every note.)

As each song ends: he separates from the piano - reaching the far end of the platform in only a few strides - and then back, as if that gap (which, in art song performance, is often silence, with applause only between 'sets') has to be filled somehow. SK is certainly the singer who - of everyone I've seen, I think - makes the most use of the fact that he isn't alone on stage. His voice projection is so strong that SK can deliver significant passages essentially to MM, as if interacting with another character in a plot. Particularly brilliant here, then, is the personality MM brings to his own playing: he wears his emotions on his face as well as his hands - especially in Schubert's moments of rapture or exuberance. Many singer/pianist duos seem to have a good 'telepathy' - not literally, of course, but a finely-rehearsed and developed sense of what each other will do when out of necessity, they can't look at each other the whole time. That was here, too (SK and MM have performed together for a couple of decades) - but more than that, it was exhilarating to sense this 'interaction' between the pair and enjoy the resulting sense of near-spontaneity.

And together, the sound they produce is something extraordinary. I won't dwell on this, but it's worth noting that this was SK's first appearance on stage following his recovery from an operation. No allowances need be made (he simply dropped one of the longer songs from the programme with minimum fuss). His rich, full tone was in such powerful evidence - a venue-cradling timbre, I still felt wrapped inside it despite being up near the ceiling. The agility (and fragility) are still available when required - and SK took some of the higher, more delicate moments at a suitably softer, untroubled glide - but most of all, we heard that heroic baritone combination of weight and momentum, driving the songs through the air.

MM played with flair and fluidity. His even, expressive style makes him so perfect for this 'nature' idiom - I first encountered him immaculately conveying Debussy's waves against the shoreline, while accompanying Anne Schwanewilms in the 'Proses lyriques', and sought out as many of his recordings and gigs as possible ever since.

Perhaps the overall effect is best summed up by focusing on one song in particular, which closed the first half: 'Im Walde (Waldesnacht)'. A seven-minute thrill-ride, its lyrical themes are the ideal combination for SK - epic and pastoral - as Friedrich von Schlegel's verse depicts a hero galloping on horseback through a vividly-drawn forest, making parallels between the rider's communion with God/nature and the awakening of artistic and creative thought in the poet.

Here MM sculpted the keys into the wind through the leaves (as the voice swirls round in the closest section the song has to a chorus), moving into a section where the left-hand bassline follows the sung melody (at baritone pitch this felt programme-shakingly resonant). As lightning bolts, he punctuated the voice with sharp stabs; as spring-water he calmed down into ripples as the song seemed to get its breath back.

I have a reissue of the duo's debut Schubert disc here by the laptop. The original release year was 1994: 22 years ago! I was happy to remind myself that a good few of the songs on that disc have survived into their 'set-list' to this day, 'Im Walde (Waldesnacht)' included. With MM providing the most supportive and secure environment imaginable for SK's return to the stage, it felt like we were celebrating not only Schubert's birthday, but the enduring brilliance of this partnership.