Opening disclaimer: this band consists of two friends of mine, Katy and Bob. So can this genuinely be a truly impartial post about their new EP? Answer: yes, because in total opposition to their name, the pair's music has never failed me yet. Plus, I do admit to a level of bias towards things I believe are excellent.

'To the Lake' is the second 'full' release from The Disappointment Choir, following their superb debut album 'Polar Ships'. I did arch an eyebrow on first seeing that this was an EP - "please sir and madam, can we have some more?" - but it's a non-stingy five tracks ... and the good news is that it has the ideas of at least twice that many.

For those of you yet to hear the DC, they're like-- like ... well, there's the thing. Their sound is a thrilling patchwork of different elements that make you think of all sorts of pop and rock precedents without being slavishly similar to much else at all. 'To the Lake' - even more so than its predecessor - gives the impression that the DC were challenged to make a chart-conquering pop record using only an indie toolbox, and succeeded. (Well, they may not actually conquer any charts, but you could of course help to change that...) 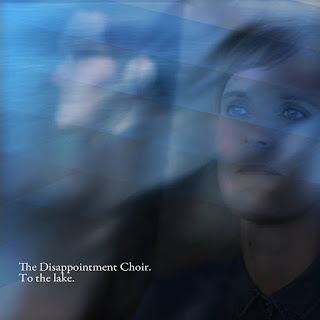 Being pop and indie all in one go helps to give their music a lovely tension. Lead track 'Need Someone' has some 'power ballad piano' immediately thrown off-kilter by the stop-start jerky rhythm. And while synthesised instruments play a huge role, the acoustic guitar - even when picked - cuts through the mix like a knife, chiming amid the electronic grinds and bubbles of 'Aimee' and punctuating the opening wash of 'Skin in It' with an almost Latin bounce.

As on 'Polar Ships', the vocals are crucial, distinctive. There is no 'blend' as such when they harmonise - instead, you have two strikingly different voices which complement each other but, in fact, don't mix. There's also a reversal of genetic stereotypes as, if anything, Bob's mournful croon takes the more diffident role against Katy's more deliberate, yet still sensitive tone: they swap the lead melody between themselves, so it's possible to focus on one voice and then the other and realise that both are singing something interesting. Certainly the vocals on 'To the Lake' have an extra oomph to them - perhaps a gain in confidence from 'Polar Ships' - but one of the nice 'indie' touches is that both B and K sound closely recorded, and quite unruffled, whatever the sonic mayhem surrounding them.

A final apparent contradiction that I think is vital to the record's success is that, on the one hand, the tunes themselves are positively anthemic: 'Aimee', 'Need Someone' and even the slower 'Centre of the World' have the kind of circular, land-just-where-you-want-them-to vocal melodies that stay with you far longer than the track time. Yet the arrangements have a kind of geeky (compliment) intricacy to them, busy but everything in its place. Just keeping track of what the percussion's doing can constantly wrong-foot the careful listener: recalling the old drummer joke that a drum machine is better because "you only have to punch the instructions into it once", I certainly feel like the DC must've taken trusty third member 'Bob's laptop' out for a pint or two to cajole it into assembling these arrangements. The extremely delicate pulse on 'Centre of the World' is a masterclass of restraint, of knowing when not to let rip. Even when some rug is cut - normally courtesy of a Bob guitar solo - it's never excessive, always performs a service to the track.

So - a pop synth duo with indie guitars. A great pair of voices held delicately in check. Memorably concise tunes over complex electronica beats. And all this in five tracks. I refer the band to my previous question: can we have some more?

(You can buy 'To the Lake' and 'Polar Ships' at extraordinarily pocket-friendly prices at the DC's Bandcamp page. If you like the band photo on 'To the Lake' *cough* then by all means go for the limited CD version!)