*Lies down on couch, analyses self*

I hope I'm not generally thought of as the unfeeling type, but one emotional phenomenon that I've always struggled with is grief for public figures. It's always seemed to me that when death takes the famous, at that moment more than any other they are the same as the rest of us: the spotlight is turned off, and their loved ones can have the privilege of mourning in private. How could I 'share' that, even if I wanted to? Who am I to intrude, even remotely?

(To give probably one of the most extreme examples in recent history - I could not 'buy into' the mass outpouring of sorrow when Princess Diana died. Not because I had any 'pro' or 'anti' feelings about Diana - simply because she wasn't my partner, or mum, or friend. It wasn't just that I couldn't share in the grief - I felt that I shouldn't.)

And yet - this week, the esteemed film critic Philip French died, in his eighties and (mostly) retired, a grand old man of the profession. Ordinarily, I would have remarked on the sadness of the occasion - but also the greatness of the achievements - and moved on. But not this time. I felt sad, in spite of the knowledge that French had led a long life, well lived. And not through some imagined 'connection' with his family, either - I still feel that their grief belongs to them, and it is not something French's public have the automatic right to access. No: I felt sorry for me. At my loss. What on earth was happening? 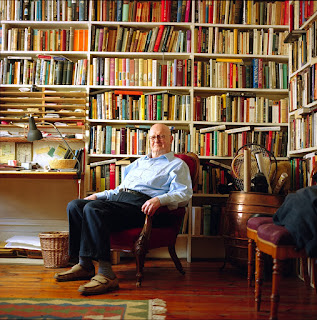 (Philip French, photographed for the Observer in 2007 by Richard Saker - featuring in the Guardian website's 'life in pictures' piece on French this week - take a look here.)

I tried to think if I'd had this reaction before and one other name sprang to mind: John Peel. For the uninitiated, Peel was a unique figure in UK radio - a tireless champion of new and unusual music well into his veteran days. For many youthful listeners he was the groovy uncle who would shine a torch into musical corners you didn't even know were there: dub reggae, speed metal and grindcore, techno, indie - it was all uncharted - and uncharting - territory. Peel died suddenly in his mid-sixties back in 2004.

I'm adopted. Whether this has something to do with my 'disconnect' from public empathising, I don't know, but I certainly don't have the same impulse as those adoptees who feel they have a piece missing, and who head out to seek their biological parents. I'm not interested. I accept this must be partly linked to my good fortune at being adopted at 6 days old - so there are no memories for me of 'parentless' times or any kind of interim or substitute care. Equally, Mum and Dad are, frankly, my Mum and Dad - no-one else had the wherewithal, or the qualifications, and then the sheer stamina and gusto to shape me into a sentient being, so they deserve all the credit (or blame) going.

But if you're adopted, you are perhaps more given to thinking from time to time about how you're put together. My enviable looks and physique (*ahem*) are presumably thanks to anonymous nature, but my mind and soul are surely 100% nurture - and not all from Mum and Dad. For example, both my folks would agree in an instant that my obsession with music was almost entirely due to my grandmother on Mum's side, who got me playing and listening as soon as I could lift a piano lid. Equally, Lilian was a heroically open-minded listener herself, and I could take any old noise I was currently into, by any band, and she would give it a spin, and explain exactly why she might really like certain elements but recoil from others. One of my fondest memories of her is when I was staying with her once, and we turned on the TV to find a world-music awards show on, back when this stuff wasn't just a click away. A new soundworld to us both, we couldn't switch off and spent a happy evening discussing the performances. Lots of shared love for Salif Keita, I recall.

For all my nan's efforts, there would of course be gaps in my personality that no-one in my immediate surroundings was going to fill. Do we subconsciously keep looking all the time for people to help us complete the jigsaw puzzle of our character? If I had not been huddled next to my radio each evening, listening to John Peel, then yes - I would still like music - but would I have had the same voracious appetite for it - the need (and it is a need - I feel it) to try out every genre, to explore every musical nook and cranny that I can, and try not to miss out on anything--? No. Of course not.

And when I was discovering my inner film nut in my student days and into my twenties - with access not just to mainstream movies but all the old, foreign and arthouse films playing in the local rep cinemas - Philip French's weekly review columns were an addiction. It felt like you were receiving simple advice about which films to see - the tone was that light and concise - but actually, by the end, you had learnt so much, with French weaving in just the right amount of context and critique, so that chances were you'd suddenly be in the know about twice as many films as you previously thought. Again, like some kind of remote mentor, it wasn't that he suddenly made me like films - I always loved the cinema. But he changed the way I would watch and learn about movies, helped me understand their history and unfolded the map for me to explore.

Just like it is with your actual teachers, you fall away from these influential figures. When Peel died, there was of course a chorus of 'gone too soon' but I wasn't mourning for all those shows that weren't to be. I hadn't listened for years. He'd already worked his magic on me - as had French, many of whose later columns I missed simply through not bothering with a Sunday paper. But all the same, I'd be seeking out new films, directors, genres (often on DVD, with gig tickets swallowing up my cinema money!) purely because of him - no-one else.

You will all, I'm sure, have your own Peel and French equivalents. I never met them, but they played a vital role in making me who I am. I am fascinated by the fact they are not music or film makers themselves: they are the enthusiasts who went ahead of me, who helped me to decide and articulate why I also love the artforms that they loved. Their passing makes me sad, but also thankful they were here at all; they make me nostalgic for the times when they made such an impression on me, and guilty for the years I wasn't listening. So I feel all right about grieving for them, because without them, I probably would be someone with pieces missing.