This was always going to be an interesting one. Kaufmann is, as many of you will know, an operatic megastar: a tenor who seemingly 'has it all' - he's in demand for German, Italian and French repertoire as well as maintaining a long-standing commitment to lieder performance with pianist Helmut Deutsch. He's building up a formidable discography with albums mostly dedicated to surveys of particular composers: 'Wagner', 'The Verdi Album' and now 'Nessun Dorma - The Puccini Album'. And - there's no dodging this - his charisma and sex appeal have resulted in terms like 'Kaufmania' to describe the fervour of some of his more 'enthusiastic' fanbase. (His last high-profile appearance in London, the Last Night of the Proms, even involved some knicker-throwing ... Tom Jonas, anyone? Well, moving on...)

So, in short, around JK, there's a lot of noise. What roles he should be singing. Whether he can possibly live up to his hype - or indeed, the high ticket prices you have to pay to hear him. Whether he is 'selling out' by dipping his toes into, say, operetta (the recent album 'You Mean the World to Me'). 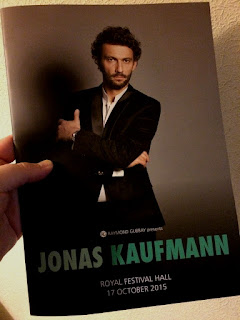 To declare my starting position: I'm already a fan, though not exactly a fanatic. When I first got into opera, I heard more Wagner than anything else (thanks to my obsessed pal David) and the rich, expansive sound of JK - not to mention the sheer power and stamina, and the fact that German is his native language - mean he's probably at his best here. The 'Wagner' album and the DVD of 'Parsifal' at the Metropolitan Opera would perhaps be good cases in point. I really enjoy his CDs, while being aware that it's partly because of his status that he gets to make brilliant CDs. As a card-carrying lieder nut, I can appreciate his sensitivity and control on discs of Strauss and Schubert. I've seen him live in 'Manon Lescaut' and thought him little short of phenomenal - voice pinning us to the backs of our seats even in the Royal Opera House amphitheatre, and acting up a storm, benefiting from a terrific chemistry with Kristine Opolais in the title role.

Now, here he was, in support of the new record, performing an all-Puccini programme with conductor Jochen Rieder and the London Philharmonic Orchestra (the main 'house band' at the Southbank). What would it actually be like? Ultra-correct and serious? More like a gig? Somewhere in between?

To get, I suppose, something resembling a gripe out of the way first - the concert was a somewhat distant relative of the CD, which has 16 vocal tracks. Here, JK was actually performing 7 arias out of a total of 15 selections, otherwise drawn from Puccini's preludes and intermezzos. I realise comparing the classical and rock worlds isn't always helpful, but I was imagining what, say, a Springsteen concert would be like if Bruce actually left the stage for every other song, leaving the E-Street Band gamely playing instrumentals for half the gig. Your knee-jerk reaction might be: "Well - that's different" - but is it that different? Especially since we know JK is capable of singing for epic running times - I would argue tirelessness and energy are among his chief qualities.

I don't expect JK to sing an entire concert without any breathers. But the protocol of these things meant that after every aria he left the stage, then came back on after the orchestral interlude, and so on - alternating throughout. So there was a lot of stop-start-applause taking up time that could've been usefully occupied by more music. Also, I felt that billing this particular programme - which was, to my mind, a concert of exquisite Puccini with a really special soloist - as a 'Jonas Kaufmann' event rather downplayed the orchestra's role. As it turned out, the LPO were not only doing much of the 'heavy lifting' but more than that, were utterly superb, clearly alive to the sense of occasion and making a real case (should one be needed) for the excellence of Puccini in instrumental mode.

To put that thought into context, our view is in the photo below - I've never quite been that 'on top' of an orchestra before. 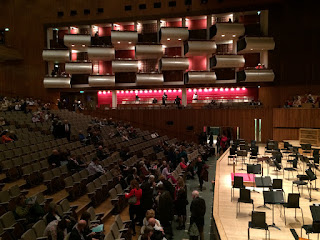 It made me appreciate a number of things afresh. The sheer physical effort and dexterity needed - the visible movement going into the enterprise, the 'single organism' tautness of the sound, through to the deftness required even to turn pages. And the broad smiles on all of their faces, aware - I hope - that they were playing a blinder. And while I expect an overall 'mood' to prevail when seeing a single opera, hearing so much disparate Puccini from all points of his career really brought home to me the filmic sweep of his sound, so consistent from earlier, lesser known works right up to the 'greatest hits'.

So... I was a bit miffed on the LPO's behalf. But if you think that means my overall response is negative... well, think again. On its own terms, it was a terrific concert. At the side and near the front, we had horns and the lower strings more or less beneath us... so I was thinking, JK's probably doing brilliantly if we even hear him ok over here. And the point is: he delivers. He does, in fact, take the affair very seriously. He is in formal dress, and aside from some pleading arm gestures, moves very little. You realise that it's all there, in the voice - yes, there's the unstoppable volume, blasting like a JCB through the orchestra, but also the timbre is working its emotional magic as well. It took me and my untrained ear a while to get used to the variation in the voice 'up top' - at quieter moments it almost seemed to have changed into another sound, a bit more tender, 'lieder-y' (technical term). I tried to explain what I meant to my learned Twitter friend David, who explained that it was probably use of head rather than chest voice to negotiate those passages.

(Regular readers of the blog - thank you, darlings, thank you - may have realised that 'Twitter David' and 'Wagner David' are two separate people. Clearly, the learning from this is that if you have any kind of musical question, simply ask the nearest person called David and they will be happy to help you.)

But in the end the variation in tone simply brought to the fore another side to this roaring talent. The sequence might've been bitty, but it was clever: the obscure choices upfront, followed by arias belonging to characters JK has played recently and has right at his fingertips, allowing the intensity and excitement to build: Des Grieux in 'Manon Lescaut', Cavaradossi in 'Tosca', and Dick in 'La Fanciulla Del West'. The famous aria from 'Tosca' ('E lucevan le stelle') was beautifully handled, with the audience hanging on every word (no mean feat, given that one attendee chose this aria to fall into a coughing fit so flamboyantly tubercular, it sounded like they were actually exploding). My personal highlight was 'Una parola sola' from 'Fanciulla' (one of my favourite operas in any case), delivered with appropriately desperate melodrama and gusto.

The closing number of the concert, then, was to be 'Nessun Dorma' itself ... thanks to Three Tenors / World Cup etc, surely one of the most widely known and loved arias ever. Again, to be cynical, there are solid commercial reasons for naming JK's Puccini CD after the song, but I can't imagine how terrifying it must be as a singer trying to make your own personal stamp on it. However, anyone who saw JK perform this at the Last Night of the Proms will know that the tune just pours out of him - I've added the YouTube video to give you an idea. The version we heard was without choir, and some of the quiet notes were quieter - but we couldn't have asked for more from the climax, JK seemingly summoning up the power of at least three tenors, the searing, soaring notes filling the auditorium - you could be fooled into thinking the roof had actually been raised.


Three encores - pleasingly upping the Kaufmann content of the evening! - sent us happily into the night. JK was astonishing and, since I'd never heard him 'up close', still an absolute vocal revelation to me. But thanks to the LPO under Rieder, and perhaps most of all Puccini, I will remember the occasion as a thrilling team effort.