Matt Howden - who mostly records as Sieben - is one of the most restlessly creative musicians currently working. His ongoing project, 'The Old Magic', is shaping up to be his most successful fusion of past and present so far ... a perfect expression of his uncanny ability to look backwards while only ever moving forwards. Time to explain.

Or first, to rewind. I've followed Matt / Sieben for a number of years now, so if you drop in on the Specs blog regularly, he may well be familiar to you. But just in case, here are a few key points... The Sieben sound is generally made up of just vocal and violin, layered and looped. So, automatically built into every track is a kind of electric (forwards)/acoustic (backwards) tension. The loops enhance and sustain this, inevitably lending each song the flavours of chant and ritual, ideal meeting points of catchiness and stateliness. 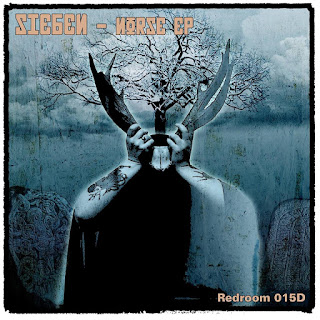 However, this seemingly limited set-up works more as a springboard than a straitjacket, as typically, most Sieben albums kick against the one that went before - not in a spirit of rejection, but finding new routes, new angles. Clearly showing an affinity for pagan/naturalistic 'dark folk' themes (I first discovered Sieben on a neofolk compilation), while inhabiting a strikingly original genre of one, MH produced a series of increasingly confident 'concept' albums involving a new lusty language based on plant names ('Sex and Wildflowers'), the ancient Ogham alphabet fused with both music and nature ('Ogham Inside the Night'), through to a full musical mystery play ('High Broad Field'). Songs were often long and luxurious, the loops building up in organic fashion, as if they were somehow dramatising the natural themes in the lyrics. Then - a complete break, as the personal focus of 'Desire Rites' with its wracked internal drama brought ruthlessly pared-down lyrics and layering time. Matt also took the opportunity to record some older Sieben material in this more streamlined form for the retrospective album 'As They Should Sound' - still a superb starting point for newcomers and a fascinating exercise for what, with hindsight, now seems a regular Sieben motif of never feeling that any song is necessarily finished. More of this later.

Seemingly freed and fired up by this, subsequent Sieben albums have mixed the ingredients in different proportions, with the concise, yet more mellow 'Star Wood Brick Firmament' followed by the raging, industrial 'No Less Than All'. As the lyric techniques have been honed to give shorter, sharper messages, so the sonic experiments have become more prominent. The most recent full-length album 'Each Divine Spark' was an extraordinary production achievement, its 'live in the studio' recording placing some of Matt' finest work to date in a warm, 3D space - no mean feat when parts of songs have to auto-replicate to build the structure. But, perhaps sensing a summit of sorts, Matt has evolved Sieben yet again.

The sound is, once again, expanding. I think that two important changes have happened at once. There is new kit at Sieben's feet, giving access to a fully orchestral - and beyond - range of timbres and pitches. At the same time, nursing the idea of retreating from physical releases and working in the digital EP format, Matt has reawakened the more ritualistic elements of his songwriting. With no format restriction on what he puts out, he is exploring what happens when you push the chord sequences for nine or ten minutes: what emerges, what changes, what disappears. What makes near-repetition so potent (it is never 'just' repetition)?

The first fruit of this new direction was the mighty 'Lietuva' EP, which in 'Užupis' had one of the most breathtaking Sieben tracks to date: a brilliant lyrical idea (a tribute to the self-declared artistic republic in Latvia) wedded to a newly-panoramic production bursting with fiddle-generated bass and sheets of strings.

Imagine my delight, then, to find that the new 'Norse' EP takes everything I loved about 'Lietuva' and whacks it up to 11. Even greater strides are taken here - and in one case, at bone-rattling speed. Nestling in the 'B-side' position is 'Ready for Rebellion' - a hyperactive, frenetic track with short sharp strokes pushing the beat - which at times really does feel ready to rebel itself - towards a keening violin hook around the three-minute mark which weaves the pounding bass and jittery bow together. The purity of this one element provides an effective contrast to the provocative, pushy vocal, distorted to match its anarchic aims. As the revolution gains control, a dirtier, fuzzier mirror version of the 'clean' hook moves gradually forward in the mix to take over. You couldn't ask for a more cleverly-realised, or relentless, musical depiction of a coup from the inside. 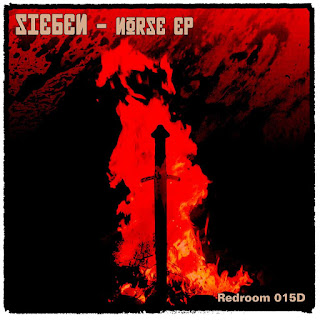 But the headline track is almost certainly 'The Old Magic'. There is so much content in these ten minutes that it's hard to know where to start. It retains in its opening moments some of the ethnic, almost gypsy feel of parts of 'Lietuva', but this time the bass line comes in early after a minute and shakes the foundations of your eardrums. Lyrically, the song resurrects Norse nature words, which - amid this new wall-of-Sieben-sound environment - sends a lightning-rod connection back to the older pagan concepts, delighting this long-toothed fan. But as always with MH, this isn't just a 'call-back' - in fact, his skill at the choice and placing of relatively sparse lyrics just gets more refined and artful with each release. For example - depending on where you are in the chorus, the voice refers to 'the old magic words' - the arcane Norse dialect - or simply 'the old magic' - the beliefs conjured up by the ritualistic, circular music. Also, the words and music should 'whirl, unfurl' ... with a vocal leap on the word 'unfurl' that actually opens the melody out - as if the lyric is instructing the tune. (At the same time, this exhortation in the chorus to physically revive these spells places the track in an esteemed company of Sieben songs that talk about music-making itself as something to be wrought, constructed - go find them, scattered across the canon!)

As the track develops through its early section - winningly, very little of it sounds much like the instrument being used to play it - we can almost hear the actual elements. There's a wailing behind the percussion, a disturbance of the equilibrium. Then, approaching the three-minute mark, the signature violin arrives with a dissonant, woozy attack that somehow sounds exactly right, resolving just at the turn of each loop, throwing the song slightly off-centre and making it necessary to go round again. Across the remainder of the track, the various loops intensify, somehow magnifying to make the distinct layers move 'closer' to each other - and to you, the listener. By the time the song ends, you can't be exactly sure how it was done. This is Matt's old magic.

Through Matt's blog, we now learn that the 'Norse' EP is the second of three - which, together, will in fact be issued as a physical album (he couldn't stay away!) with the overall title 'The Old Magic'. This is fantastic news for so many reasons. For a start, it's typical of Sieben's 'innovation from restriction' ethos that dabbling in individual EPs has unleashed enough creative energy to conjure up a fascinating new concept and record an hour-long album made up solely of epic 12"-length tracks. Also, I'm an old-fashioned chap and I think this music deserves the physical existence Matt writes about - not to mention the opportunity to showcase the lyrics and Martin Bedford's striking and sympathetic artwork.

Making the EPs even more desirable are the re-workings of older Sieben tracks, given a new lease of life on the upgraded machinery - again, a good example of post-'As They Should Sound' Matt giving his past a kick up the future. This time round, we're treated to companion tracks 'Loki' and 'Loki Rides Again', bending the new space and clarity to gentler ends, and giving MH's increasingly confident vocals a chance to shine.

I strongly suggest you buy this EP - along with as much other Sieben music as you can lay your hands on - and the best place to start is the Bandcamp page. The main artist website for chapter and verse on Sieben (and Matt's other musical adventures) is here.