Warning! As I post this, tickets are still available for the final two performances of 'Morgen und Abend' on Wednesday 25 and Saturday 28 November. It's also being broadcast on BBC Radio 3 on Saturday 5 December. So, if you would like to see or hear the opera knowing as little about it as possible, please stop reading here, with my blessing, and by all means come back later. Otherwise, onwards!

Very exciting evening for me. My first visit to a brand new, contemporary production on the Royal Opera House's main stage. I'm more used to seeing the magnificently modern at the English National Opera's Coliseum (wonderful new works from Julian Anderson and John Adams) ... or on a smaller-scale, some new chamber opera at the ROH's studio space, the Linbury. And I'm still smarting a little from getting into serious opera-going not long after George Benjamin' extraordinary 'Written on Skin' played there. So, this did feel like a bit of a special occasion. Would the work itself live up to my good mood?

'Morgen und Abend' is a new opera from composer George Freidrich Haas, with a libretto by Jon Fosse (based on his own novel). It's a compact 90 minutes in a single act, and the synopsis is essentially a one-liner: Johannes enters the world, then leaves it. The ROH website offers more clues: we are to see Johannes's birth, we know he will work as a fisherman. Then, when much older, he begins to see figures from the past and discovers that, like them, he has now died.

First things first: I loved the score. To people who lean towards the extreme "it's modern, so probably hasn't got any tunes" viewpoint: you're quite right. Stay away - this isn't really aimed at you. However, if you accept that a great deal of contemporary classical music is exploratory - looking for new sounds, chords, even notes - finding new ways for music to work - then get a ticket. Haas marshals huge forces here - I hope you can make out from my hasty, fuzzy photo the extra arrays of instruments ranged along the sides - and conductor Michael Boder does a brilliant job with the dynamics, making every jolt count. From ripple to wave, keening wind noise, to explosive drum-storms: Haas manages to make the orchestra embody its own character - the sea, the unstoppable, cyclic pulse that shapes and underpins these characters' lives. It's a perfect extra piece of symbolism (on top of the 'morning/evening' journey), the constant ebb and flow of the sound, mirroring the push and pull into, and out of, life. 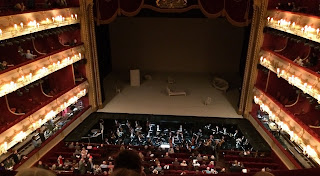 The structure of the piece also intrigues - to the point where some have decided it isn't an opera at all. The opening third is arguably the most challenging section, as while you are still getting used to Haas's soundworld, the lone figure on stage is actor Klaus Maria Brandauer. He plays Olai, Johannes's father, anxiously waiting on news of his son's birth, the labour progressing behind a closed door. Olai's part is entirely spoken, part realistic monologue, part a kind of heightened poetry - with the added flavour of a primal-scream passage where he seems to be empathising through some kind of birth-memory of his own. At first, I freely admit, I had no idea what to make of it, until I locked into the rhythms of Brandauer's speech and how Haas had written the 'quiet/LOUD' accompaniment around him as closely as if he was singing. 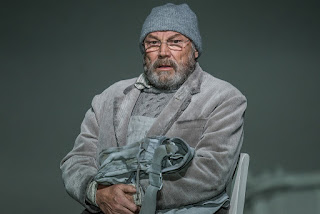 (The two superb production photos here are by Clive Barda, taken from the ROH website.)

But why a speaking role at all? I think it ties into the opera's sense of limbo/displacement (brought out fully in the staging - which I'll come onto next). Brandauer is Austrian, yet delivers his dialogue in English, obviously accented. The singing parts, however, are in German. At the point where Olai effectively hands the opera over to the other characters, he speaks in English to the midwife, singing her replies in German - signifying that whatever's happening here, wherever this is, it's not 'reality'. (I was also interested to read that this was a co-commission from the Royal Opera and Deutsche Oper Berlin, so it feels very appropriate that both languages are incorporated to good, useful dramatic effect.) I also think that Olai's soliloquy acts as a modern take on an overture - as his meditations on birth and death appear to be borne out in how we see the rest of the opera unfold.

The staging is sparse, everything a kind of off-white - not quite heavenly. The props are essentially symbolic - a door (isolated - there is no room set either side of it), a few chairs, the bed, the fishing boat. There is no attempt to disguise the revolving wheel on the main stage, as almost imperceptibly the appropriate piece for the action taking place glides glacially to the front. The characters are also dressed from head to toe in the same colouring, so that they can at times appear little more than outlines against the background. A piercing bright light moves from right to left around the vertical perimeter of the stage, so on one level, we do move from morning (sun in the east) to evening (west), but at the same time, it cause the shadows and light to fall differently on the set and characters, and finally - the eye of the afterlife, if you like, it's coming to us all! - it turns its gaze on the audience.

It seems to me that this is an opera of ideas. I liked the fact that I was not only sitting there appreciating, I was also 'on my mettle', so to speak, my mind fizzing with 'mirroring' touches that I'm still thinking about days later. Because the mysteries of birth and death are unknowable - is death a return to the same state? - both are behind the closed door. We see the limbo element but Johannes is born behind the door, and once he has passed to the other side of the portal, his daughter cannot see or go through the door after him. Whereas Johannes's final move into actual death, led from this mid-space by his late friend Peter, is obscured from our vision by the blinding light. 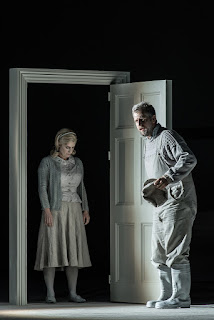 The midwife at Johannes's birth and Johannes's daughter are sung by the same soprano (a lovely performance from Sarah Wegener, making both characters quite distinct), bringing him into life and watching him leave it. Olai's near-reluctance to go and see his new-born son - he's been so worried and seemingly can't quite believe he's a dad - is echoed in the uncertain tussle Johannes goes through in his initial resistance to confront his death, providing a link between father and son, who never actually share the stage. Importantly, we never see these characters' ongoing daily lives (it's morning and, not to, evening), but these economic connections can convey a wealth of storytelling. I also liked the way the surtitles were projected onto the staging, again making more of the English/German mix, but also lending a thought-bubble quality to what the characters were singing - given that we are almost certainly in Johannes's fading mind.

Baritone Christoph Pohl is outstanding in the central role. I found the subversion of voice types appealing: Pohl's tone still conveying Johannes's confusion and uncertainty while retaining the robust quality of a man of the sea. The comforting contralto of Helena Rasker as Erna, J's late wife but in fact only a spirit angel of mercy, along with tenor Will Hartmann giving a finely-nuanced and finally 'anti-heroic' performance as J's eventually stern, unstoppable guide into death.

I would broadly recommend this to anyone open to a bit of a mental and musical challenge - in fact, if you like a range of music outside the classical world - say, ambient/electronica - you can hear Haas achieve equally fascinating results here with an orchestra. Give it a try. A workout for the mind as well as the ears.