Well-executed: 'Andrea Chénier' at the cinema

French Revolution melodrama 'Andrea Chénier' feels, in many ways, like THE event of the Royal Opera House's current season. The only one of Giordano's operas performed with any regularity, and only its first appearance at the ROH in 30 years. And as if that wasn't enough, the star wattage supplied by the two leads - Jonas Kaufmann and Eva-Maria Westbroek - was probably sufficient to power the lights for the entire run.

I remember when booking came up for this opera last year, I was in a "can't go to everything" frame of mind - so I let this one slip down the list. I tried to gauge how enthusiastic I really felt about the subject matter, leaving aside the stellar casting - and I think the completely unjustified fear of a 'posh Les Mis' made me twitchy. So, I decided to play it safe and see the cinema relay instead of 'live'.

Chénier was real and went to the guillotine only a few days before Robespierre. The story of the opera, however, is a tragic (fictional) love triangle built on the scaffold of the facts. Using a 'four meetings and a funeral' structure, the opera shows key points leading to AC's fate. Maddalena is the spoiled daughter of the Countess of Coigny, who throws a party for her fellow society aristocrats, wilfully oblivious to the suffering and poverty surrounding them. Gérard, one of the servants, has long been in love - secretly - with Maddalena, who is in turn attracted to poet Chénier, one of the guests. Goaded into versifying like a performing seal, Chénier protests at first but is provoked into improvising a 'power to the people' invective that not only ruins the mood somewhat, but inspires Gérard to revolutionary fervour and he storms out of his job, taking his old dad with him.

Fast forward to more dangerous times, and Chénier is waiting in a cafe to meet a mystery woman who has been sending him letters. Inevitably, this is Maddalena, now vulnerable after her parents' execution. The pair declare their love shortly before Gérard - now a revolutionary bigwig - arrives. He fights with Chénier, who gains the upper hand and wounds Gérard. With Maddalena's interests at heart, Gérard realises that if he dies, only Chénier will protect her, so he encourages AC to flee and throws his mob off the scent.

Gérard survives, however. Chénier is eventually arrested, and Gérard - after a struggle with his conscience - signs the accusation that will condemn AC to death and allow him to take possession of Maddalena. She turns up to plead for Chénier's life and when she offers herself to Gérard in return for mercy, his resolve is broken and he tries to withdraw the charges and get AC acquitted. The jury condemn Chénier anyway. Maddalena decides to take the place of a young mother condemned to die on the same day, and the couple go to the guillotine together.

This production has been greeted - rightly, I think - with a huge amount of enthusiasm. Getting a close look thanks to the cameras, it's clear how sumptuous the traditional staging and costume is, and I can imagine the sheer sense of occasion rippling through the audience in the opera house like a wave. That said, a great deal of the positive reaction I've seen - whether from punters on Twitter or the singers in the on-screen interviews (more on this later) - is solely concerned with the music: how beautiful it is, how brilliantly it's written for singers. And I think I can see why.

Being a bit more detached in the flicks, I felt the creaks in the opera's dramatic structure were a little more exposed. Often in a piece of theatre or opera, undying love can develop between the two leads in a matter of seconds (or better give them minutes, say, in Wagner), so it's hard to complain about that. But by dropping in on the characters in stages, it makes it harder for them to fully come to life.

As a result, it's all about the music - the glorious melodies in the opera, which snatch beauty from the jaws of (the) Terror, and even more so, the voices: Giordano gives the tenor and soprano some majestic showcase tunes along the way and a crucial final duet. This last act has an almost maniacal sweep to it - ecstatic love, acceptance of fate, grief, a kind of martyrdom (Westbroek's superb facial expressions - another advantage of cinema viewing is better appreciation of the acting - manage to convey Maddalena's sudden and rather twisted near-lust for death as a way to put things right) and transcendence.

As a result, the scene is totally dependent on the ability of the two leads to take the audience on the same emotional helter-skelter they go on, and JK and EMW were suitably riveting. Kaufmann at full-throttle seems to go beyond decibels into somewhere on the Beaufort scale, but Westbroek was with him all the way, matching his intensity and perfectly audible. I also want to point out that the ROH Orchestra were on spine-tingling form and some of the instrumental passages - in particular a lantern-lighting sequence carried out to a sinister, ominous riff - were as thrilling as anything from the singers. 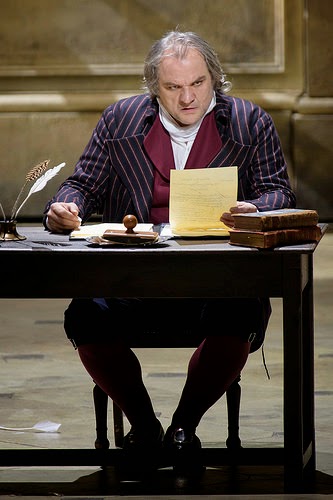 With one exception: Željko Lučić as Gérard. (The photo of Lučić is from the Royal Opera House website, taken by Bill Cooper.) The character is a great head start, coming out fighting against the restrictive structure and emerging as a fully rounded, convincing antagonist - the 'baddie' doomed to take the Scarpia role but with all too real mood-swings, changes of heart, internal moral dilemmas and genuine love at the root of all his bad - and good - decisions. Lučić never once takes the panto villain route, opting instead to make Gérard a bruised bear of a man, truly terrifying on occasion (his point of maximum fury, about to seize Maddalena before his crisis of conscience) but wracked with guilt, unpredictable, emotional. He made his control of volume part of the characterisation. His quiet withdrawal after failing to clear Chénier is contrasted with the slightly queasy euphoria of the lovers' skyscraping death-song, leading me to wonder who the truly tragic figure really is. A brilliant performance.

The ROH cinema relays are a fantastic enterprise, with accompanying interviews and featurettes illuminating various aspects of the operas being broadcast. (In particular, I think we should get a TV series - maybe only 15-20 minutes an episode - based solely around maestro Pappano sitting at a piano, being hugely informative and entertaining about any given work he likes.) My only suggestion here would be to show these items before the opera - a bit like the halcyon days of my youth where you'd get a short before the main film - rather than in the interval, especially if - as with this event - the interviewee is Jonas Kaufmann. Not because I didn't want to hear what he had to say - he's in fact a really winning, infectious and communicative talker - but because it 'took me out' of seeing him as Chénier: I'd prefer to stay in the same 'headspace' through the interval - just securing an ice cream is traumatic distraction enough - and be carried along with even more conviction.