For some years, the only countertenors I heard regularly in my classical music listening formed part of a group - in particular, the CDs and concerts of the Hilliard Ensemble and The Sixteen. Always an otherworldly presence, pulling the collective sound up towards the heavens.

Yet several recent opera productions have introduced me to this most arresting of registers, exposed and exploited for its own sake. It seems to me a lot to do with innocence, or the losing of it.

For example, Idamante - the son in Mozart's 'Idomeneo' - was originally a part for a castrato, and the casting of Franco Fagioli in the latest Royal Opera House production underlined a 'hasn't-his-voice-broken-yet?' naivety of the boy-prince. Bejun Mehta's 'boy' in the George Benjamin opera 'Written on Skin' is the alter ego of an 'actual' modern angel who, in spite of himself, reciprocates the love of his host's wife and brings doom upon the house. And in 'Thebans', by Julian Anderson, the messenger parts - whose job it is in Greek tragedy to report offstage events of unpalatable horror that they can never 'unsee' - are countertenor (neatly reflecting the fact that we get our word 'angel' from the Greek word for 'messenger').

In the English National Opera premiere production of 'Thebans', this countertenor was Christopher Ainslie. Such was the impression he had made on me that his name leapt out when I was looking through the Wigmore Hall recital brochure, and I booked tickets. 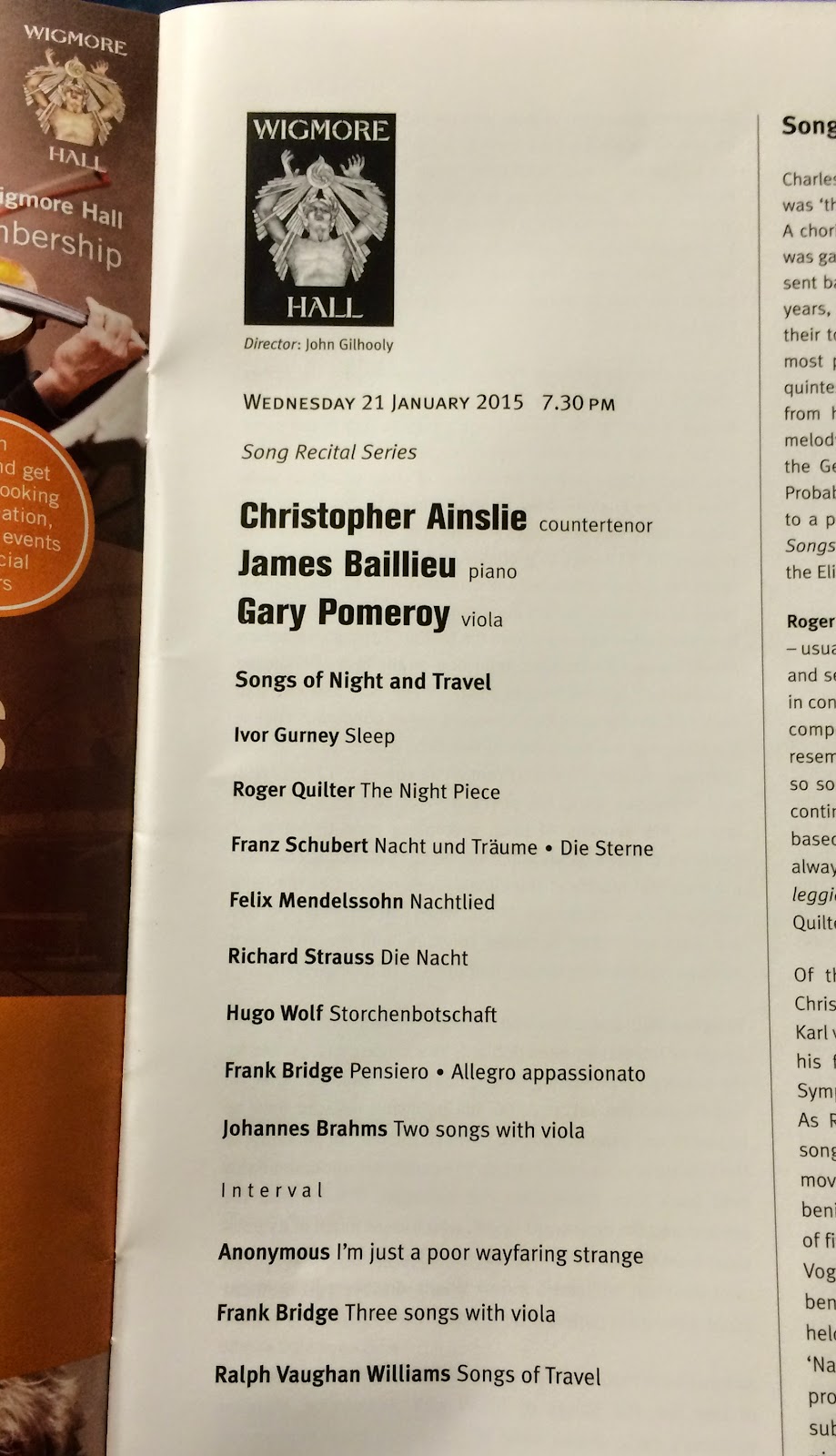 Ainslie is a thoughtful and astute programmer, and the Wigmore Hall brochure from several months ago had an old running order that has since changed into an arguably more structured and balanced selection. Making some brief scene-setting remarks, he explained how the nomadic life he led as a singer made him link night and travel, since a wanderer tends to feel their emotions at the highest pitch in the dark.

There are some lovely symmetries to the concert. Broadly speaking, the two themes are each given their own half. Brilliantly, Ainslie curates a quasi-cycle in the first section, with 'night' songs from Gurney, Quilter, Schubert, Mendelssohn, Strauss, Wolf and Brahms, which all marry the theme with love, longing or both. Then this underlying atmosphere also links to the second half which is dominated by Vaughan Williams' beautiful 'Songs of Travel' sequence. The programme notes refer to this (wryly, thank heavens) as sometimes dubbed an 'English Winterreise' - it isn't, although the reference nicely reflects the Schubert we do hear in part one. However, 'Songs of Travel', for all its melodicism and melancholy, has a typically robust 'stiff upper lip' quality to its rhythm and attack - you can't imagine this chap just collapsing in a heap in front of a hurdy-gurdy man.

The ace in the pack - and a new discovery to me - is the music of Frank Bridge (dates 1879-1941). Again with an eye on the two halves seemingly mirroring each other, we hear two instrumental pieces for viola and piano in the 'night' sequence, dreamlike in that one is restful, the other agitated ... then three contemporary songs for viola and piano in the 'travel' half that jolt the listener into heightened awareness before VW takes over.

James Baillieu's piano is sympathetic but at the same time rock solid, laying the foundation as Ainslie soars. I had not heard a countertenor sing alone with piano before, but the 'sound' here is of the accompaniment taking a more forthright role, to give the necessary overall heft. Adding Gary Pomeroy's versatile viola works superbly - again, its lower tone never threatens to overlap or interfere with the voice but fills out the acoustic space beneath it perfectly.

Ainslie himself was everything I'd hoped he would be after 'Thebans'. While that extraordinary pitch can easily suggest fragility or delicacy, this was a commanding and powerful performance. From volume and even vitriol in Bridge's anguished 'Where is it that our soul doth go?', to an almost music-hall comedy rendition of Wolf's humorous 'Storchenbotschaft' ('Stork-tidings') ... Even the occasional lower note seemed to show a 'hint of tenor' then somehow, instantly, he was back into the falsetto without any sign of a pause or break. The encore was a South African lullaby called 'Thula Baba', rendered in a gentle arrangement by the trio, themselves all from that country (on YouTube, the piece seems to be mostly present in rather ramped-up, sleep-preventing form with sopranos, choirs and orchestras - 'HUUUUSH! MYYYY! BAAABY!' etc). During an instrumental section between verses, Ainslie kept a modest, single-note hum audible throughout, which created alternate harmony or mild discord as the viola and piano weaved around it, a moment of almost choral 'world music', soothing and compelling.

For its combination of skilful programming, relatively unusual lieder voice and settings, and wonderful performances from all three musicians - this has really set the bar high for my 2015 recital visits. I was pleased to see that the recording microphones were up in the auditorium. I really hope this concert gets a broadcast or even better a CD release (possibly through the venue's own Wigmore Hall Live label) - it was busy but not packed, and it would be great if this spellbinding evening reached a wider audience.