Schubert's monumental song cycle 'Winterreise' is a rite of passage (appropriately enough) for many singers and pianists, all bringing their own interpretations and personalities to the work, and often returning to it as their own life-journey continues and world-view changes. (I think there are at least three separate recordings by the great Dietrich Fischer-Dieskau, for example.)

However, tenor Ian Bostridge possibly has a closer relationship with it than most. After singing it for some two decades, his ongoing engagement with the sequence has resulted in an intriguing book, 'Schubert's Winter Journey', and luckily for us, a tour to accompany it, with Thomas Adѐs on piano.

Tonight's venue, the main hall of the Barbican in London, is almost comically huge for a recital of this kind - as we take our seats, the piano looks rather lost in the middle of a vast, otherwise empty stage. The atmosphere changes, however, when the two men arrive - solemn expressions above the neck, full white tie below - and a circle of light homes on in them, leaving the wings greyed out of our vision. 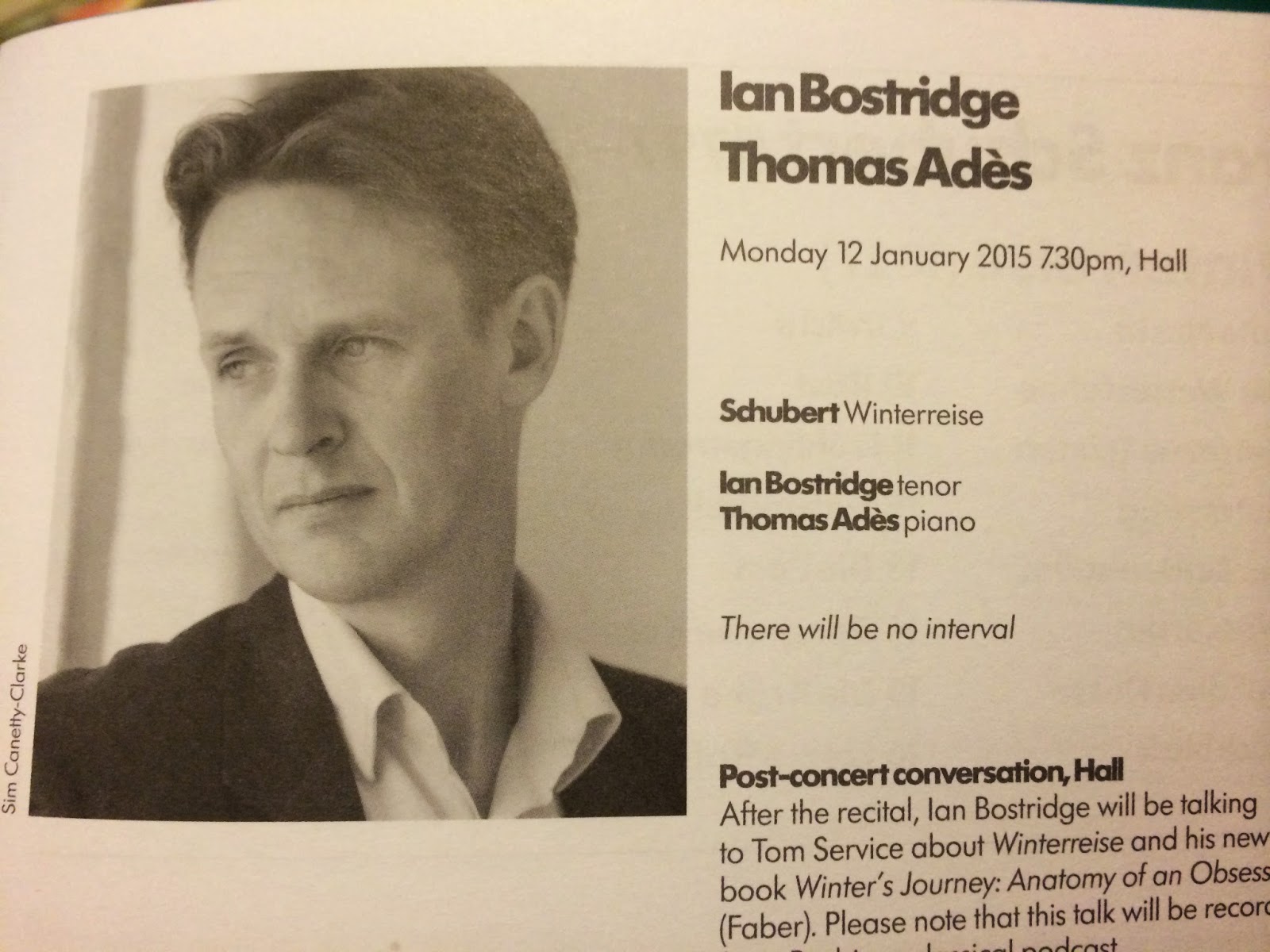 I've written briefly about IB before now but I'll re-cap a little here (rather than send you off following links). I think he is one of our most individual and distinctive performers, in any musical genre. To begin with, Bostridge's voice is something quite other. Producing a 'high', or narrow timbre to match the high pitch, he sings with a keening, yearning quality that can convey fear, anguish or even nervous energy without sacrificing any power. (Reference points for a novice like me are really hard - it's a world away from a 'mega-tenor' Kaufmann-like sound... a similar orbit to Mark Padmore, perhaps, but with a harsher edge than MP's choral serenity... sometimes I also convince myself I hear a little of Peter Pears - and Bostridge has recorded a great deal of Britten. But these are passing impressions and none of them would necessarily prepare you for hearing IB in full flight for the first time.)

When considering why I find him such a fascinating presence, I started to focus on two points in particular:
I think this combination of the cerebral and physical is behind the sense I get that Bostridge lives 'Winterreise' every time he sings it. His facial expressions dramatise the text and amid the frowning focus I mention above, we get defiant, slightly manic smiles as the speedier songs - as late as no.22, 'Mut!'/'Courage!' - propel the traveller to journey's end. (I find that no matter how many times I listen to 'Winterreise', it always moves that little bit faster than I remember from the previous play - Schubert is relentless in pushing you onwards.) And where there is ugliness or terror, IB is unafraid to bring it out vocally. In this performance, for example, the Crow ('Die Krähe') from the 15th song makes its presence felt in a cruel rasp, rupturing the beautiful tones surrounding it.

And Bostridge's angular frame is hardly ever still. In the Q&A after the recital, an audience member asked him about his theatricality, and he admitted that while he never exactly 'planned' it, he'd become more aware of what he was doing. Leaning on (and into) the piano for apparent support, as though it contained some new idea or truth, even walking to its far end as if to circle it, he never stops stoking this sense of constant motion. (Leaving aside Michelle Pfeiffer in 'The Fabulous Baker Boys' for the moment - as we must - it's hard to imagine a more convincingly felt interaction between vocalist and piano.) And mention of the piano brings me to the pianist.

Thomas Adѐs is perhaps more widely known as a composer than performer, although his charismatic presence at the piano made him very much Bostridge's equal partner. He was also a real 'mover' - leaning in close to caress quiet notes from the keys, then straightening up imperiously during the crucial moments of volume and heft... and choosing to turn his own pages. This really caught my attention - as if it gave him (as someone who's normally deciding what the notes will be) more psychological dominance or control over the material. I thought he played wonderfully - really delicate lines for Bostridge to weave or dice his way through, and choosing his moments to let rip with sparse precision. I felt the two of them were like working parts of an engine, almost presenting symmetry as Adѐs pumped the energy into the piano through the keyboard, for Bostridge to draw on as he gripped the edge of the instrument for dear life.

This kinetic interpretation was especially important on this occasion, I feel, because of the hall's size. Their sense of dynamics - movement as well as volume - gave them the best shot possible of making 'Winterreise' truly three-dimensional and as heart-rending at the back wall as in the front row. In the interview, Bostridge linked the decision to wear tails to this predicament: he explained that the attire made his posture better and helped free up his chest to project more sucessfully. Did their efforts succeed? For me, personally (in the circle), a resounding yes. I loved every minute - I'm in awe of IB in particular, and what he does. I thought it might be years before I ever heard him sing this live and, suddenly, here was the opportunity, and the performance was all I hoped it would be.

But a large crowd can defeat a mood. The 'hive mind' is a strange phenomenon, pathologically scared of just shutting up. 24 songs means 23 brief pauses - and in them all, the panicked ca-cough-ony was terrifying, as if TB had taken the Barbican like Poe's Red Death. More exploding heads than 'Scanners'. Add to that the couple of occasions when everyone turned the pages of their texts simultaneously to keep following the words: in an intimate space, it's not so bad - when there's a couple of thousand folk doing it, it's like being in a regatta.

If a feature of winter travel is that everyone on the trip has a bewildering variety of noisome diseases, then perhaps on this particular night we had a little too much authenticity. But this is to take nothing away from the commanding duo on stage, who battled against the adverse conditions and calmed the audience into the awed silence that a truly great 'Winterreise' demands at its close. Then the most deafening sound of the evening: the applause.

Here is a complete performance by IB of 'Winterreise' (with the marvellous Julius Drake on piano):