"Nocturnes is an evening of memories, myths and dreams," begins the programme text.

In some of the interviews in the run-up to this special concert, Jo Quail talks about her time away from the cello - itself a kind of darkness, I imagine, given her extraordinary relationship with the instrument now - and how she found her way back. This makes the programming of 'Nocturnes' even more interesting, as the evening builds up into a musical autobiography: starting with arrangements of pieces that shaped her listening and playing, moving to tracks from her two solo albums, before arriving at a majestic new work, a glimpse of who knows how many future possibilities.

But the evening isn't nostalgic - everything from the past is revisited and refreshed, shining new light on some of the pieces we already knew, and bringing the less familiar out into the open for appraisal. In fact, so accomplished are the (re-)arrangements and treatments during 'Nocturnes', it's as if everything resoundingly brilliant about Jo's talent now - composition, performance, even confidence - has been plugged in and shot like a re-energising jolt of electricity through all the music she's absorbed and created.

The opening section of the concert was a sequence of seven pieces - all encountered by Jo at a crucial point in her musical life, getting their hooks (literally!) into her and not letting go. Repaying the favour, she has recast them in her own image and arranged each song for cello quartet (her onstage colleagues are Raffaele Ottonello, Laura Passey and Anna Scott). People used to seeing Jo live will know that she uses loops to sound like several cellos at once. With an actual quartet, there's new flexibility: both accessing the sound of multiple acoustic - rather than electric - cellos, and opening up the floor to tunes that don't necessarily lend themselves to looping.

In just seven selections, the timespan and breadth of genres the suite covers is staggering. (The only other artist I've seen attempt anything vaguely like this is Richard Thompson with his '1,000 Years of Popular Music' - and that was neither as ambitious nor brilliantly compact as this.) The touchstone, if there is one, is the early 20th century classical miniature - we hear Bartok, Schein and De Falla. These are interrupted, however, by a song from 'Fame', a 16th-century meditation, an apparent dose of Jo's beloved hard rock (Van Halen) and some intense, industrial angst (Nine Inch Nails). 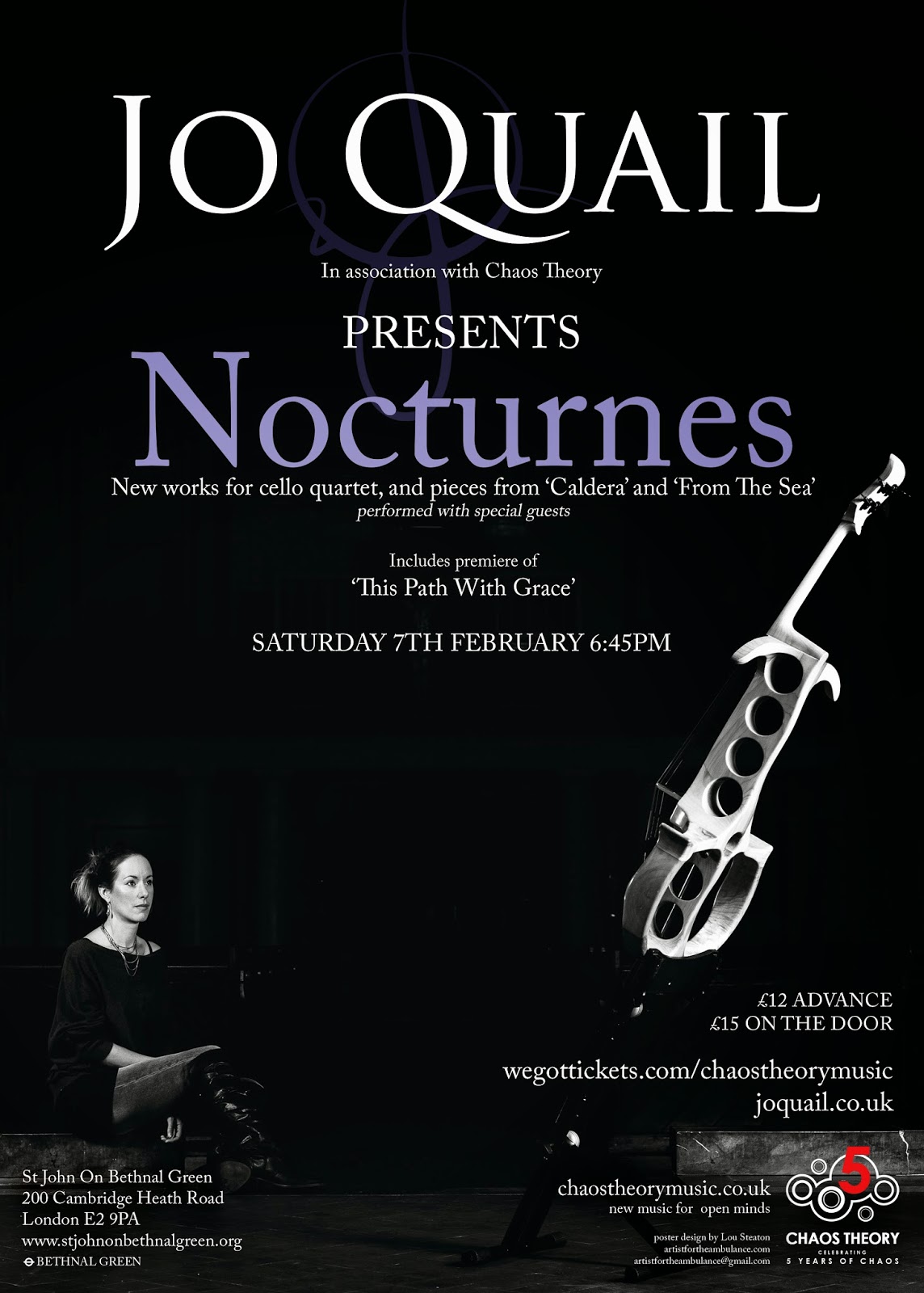 Not only does Jo give us a musical self-portrait with these choices, her adaptations are also witty and instructive (in the best, most entertaining sense). Inspiration is an elusive beast, and sometimes just knowing an artist's influences can still leave you some distance from understanding where or how they fit in. Not so here. Listening to Jo's own records in isolation would not necessarily flag openly where a bit of synthesised grind or hair metal has prompted a sound or idea. But hear those favourites played back to us in cello format and suddenly the whole picture comes into focus. The Van Halen track, '316', is a particular highlight. Wrong-footing our expectations, it's not a ferocious rocker but a gentle, acoustic instrumental. As the players abandon bowing to pluck the harmonies from the cello strings, they are - for those couple of minutes - considerably heavier than the Van Halen original. The variety of the arrangements avoids any kind of '99% mournful elegies' cliche and, helped by the church acoustic, all four voices soar.

The first half closes with three of Jo's own pieces, re-imagined for the 'Nocturnes' line-up. 'The Colour of Water' from first album 'From the Sea', is brought beautifully full circle as the original writer and reader of the poem that inspired it, Mohan Rana, returns to recite the verses over the new arrangement. 'Hunter from the East' was originally a wholly electric cello/guitar duet, bathed in ethereal echo; now, with Daniel Merrill on violin, it becomes a kind of other-world music, exotica unplugged, somehow from Further East.

Then, 'South West Night' - which changes every time it's played live, features improvised vocals from Robyn Sellman (as well as DM's violin) - and even the audience are conducted into providing wordless vocals and sound effects. The piece was written to convey the canopy of an Australian sky, and this key bit of information pushes any guest performing it with Jo to try and capture the vast and unknowable. Robyn's performance was extraordinary - fearless and completely unselfconscious, she left vocabulary behind, and managed to convey both beauty and a kind of threatening power.

The stage emptied for the interval - then Jo returned alone to play 'The Hidden Forest', the acoustic solo piece from latest album 'Caldera'. Depicting a sunken forest only revealed as the sea recedes, the piece simulates a tidal pulse with a recurring plucked note through the melody that sounds as if Jo could almost be looping - although she can't be, of course. Switching to electric cello for the next sequence, Jo brought back to the stage someone you could only describe as a secret weapon in human form, percussionist Al Richardson.

In some ways, this was the closest part of the show to Jo's normal set - she stuck to her electric cello and looped her parts as normal. However, on 'Caldera' in particular, there are subtle, measured drum sounds woven into the fabric of some of the tracks, which inevitably don't make an explicit appearance live. Until now. Fans of the new album are unlikely to forget the 'Nocturnes' versions of 'Jhanoem the Witch', 'Laurus' and (to move out of sequence and briefly mention the encore) 'Adder Stone' for the rest of their listening years. Al is such a master of the kit that - not unlike the way Jo layers the cello - you could detect him building the complexity of the rhythms up in audible stages. He starts with sparse, hefty beats and then gradually, as the songs gain volume and momentum, uses more and more of the kit until he's driving the track along before you even realise it. Think of his sound as getting 'fuller' rather than louder. Jo was visibly exhilarated by this virtuosity herself and gave absolutely raging performances. They tackled 'Laurus' - such a storming tune that in a folk-classical parallel universe, it's still no.1 for the 20th week running - without the safety-net starting point of a click track but the sheer intuitive chemistry they share through years of playing together made it one of the tightest, most energised moments of the whole evening. And even this high-octane level of intensity did little to prepare us for the finale, 'This Path with Grace'. After spending the evening polishing the rear-view mirror, now it was time to look ahead.

Jo's most ambitious composition yet, 'This Path with Grace' marries the full string band from the first half of the concert with percussion and choir. In short - everyone returns to the stage along with the Green Army Choir. The music was written to accompany the atmospheric video work of film-maker Michael Fletcher - which is technically astounding yet in thrall to natural forces, so a perfect fit for Jo's music. In Jo's programme notes, she explains how the moon influenced the composition, so perhaps that's why this piece also has such a tidal feel, this time surging and powerful, a more robust relation to the secret, drowned forest.

Everything about this new work reflects and expands on Jo's achievements to date. Her talent for creating multiple structures and bringing them together carries the piece to a jaw-dropping finale as the pounding rhythms return to join the choral throng. The ever-present tensions between ancient/modern, scientific/spiritual, organic/electronic - these all find expression in the 'human instrument' of the voices against the seismic orchestration; and - a touch of particular genius here - the blend of Jo's electric cello with the other acoustic strings. This creates a 'close but not identical' sound mix that blends superbly yet still gives the ear that little electric jolt - "something isn't quite normal here - I must listen harder to work it out."

I think that 'This Path with Grace' can stand proudly shoulder-to-shoulder with Tavener's great work for cello and voices, 'Svyati', which Jo has performed. As Tavener pursued his notion of holy beauty with that work, Jo also seems to be on a quest of her own.

To an artist restless and driven enough to develop new material during live performance, it's easy to understand the appeal of re-visiting music from earlier points in your life. When is a piece really finished? What if we did it *this* way? But 'Nocturnes' was so much more than that. I'm a fan, so I already knew - and will tell anyone who'll listen - that Jo is a brilliant cellist and a writer of singular vision.

But every section of the concert allowed this talent to blossom in new ways: the invention and playfulness in the 'cover versions' at the start; revamping the earlier works for maximum acoustic splendour; and finally, premiering a new piece that brought whole new areas of orchestration and dynamics to her work. Were she to ever go 'the full classical' (and I think she should), she can be confident of conducting large groups of players successfully; from the amount of eye contact and smiles exchanged throughout the whole evening, it was clear to the audience how inspired and fired up the other musicians were - not that we wouldn't have been able to tell from one perfect performance after another. The standing ovation happened for a reason.

'Nocturnes' may be a concert full of dreams (and I use the present tense in the wish there'll be some kind of repeat or sequel). But as well as night thoughts and half-memories, dreams can also mean hopes and ambitions for the future. To me, the evening was just as much about this latter kind. I felt a line of accomplishment had been vaulted with ease, and that these ambitions were becoming realities; it's not really a question of what Jo might do next. It's more: what couldn't she do?

* * *
The recorded version of 'This Path with Grace' is available to stream or - even better - download on Jo's Bandcamp page here. Make haste!

Author and fellow JQ fan Carya Gish has also published an eloquent, incisive post about the concert on her blog here - with the added bonus of some superb photos.

Chaos Theory, who promoted this concert, are behind an amazing range of events focusing on non-mainstream yet exclusively enticing musicians. Find out more about what they get up to here.