Yes, the Proms are up and running again. A few more evenings this summer (though not quite as many as last year, when I heard the entire Ring cycle in a week, standing up...), I'll be back at the Royal Albert Hall, swept up and sweltering in the whole massed rush of the thing.

And as thrilling as those main concerts are, there is something of the treat, the delicacy, about the Chamber Music Proms, which take place every Monday lunchtime at Cadogan Hall throughout the entire season. For a start, just going to one in the first place means a day off work for many in the audience (including me), so there is that truant sense of occasion. More importantly, the acoustics are glorious, and there doesn't seem to be a bad seat in the place - so you're more or less guaranteed a relaxing yet immersive listen.

Even within those parameters, this particular Prom already feels to me like one of the great classical gigs I've been lucky enough to attend - exactly the right players performing exactly the right music in exactly the right location. (And I didn't even realise until we arrived that I'd managed to book second row seats! Modest applause, please.) 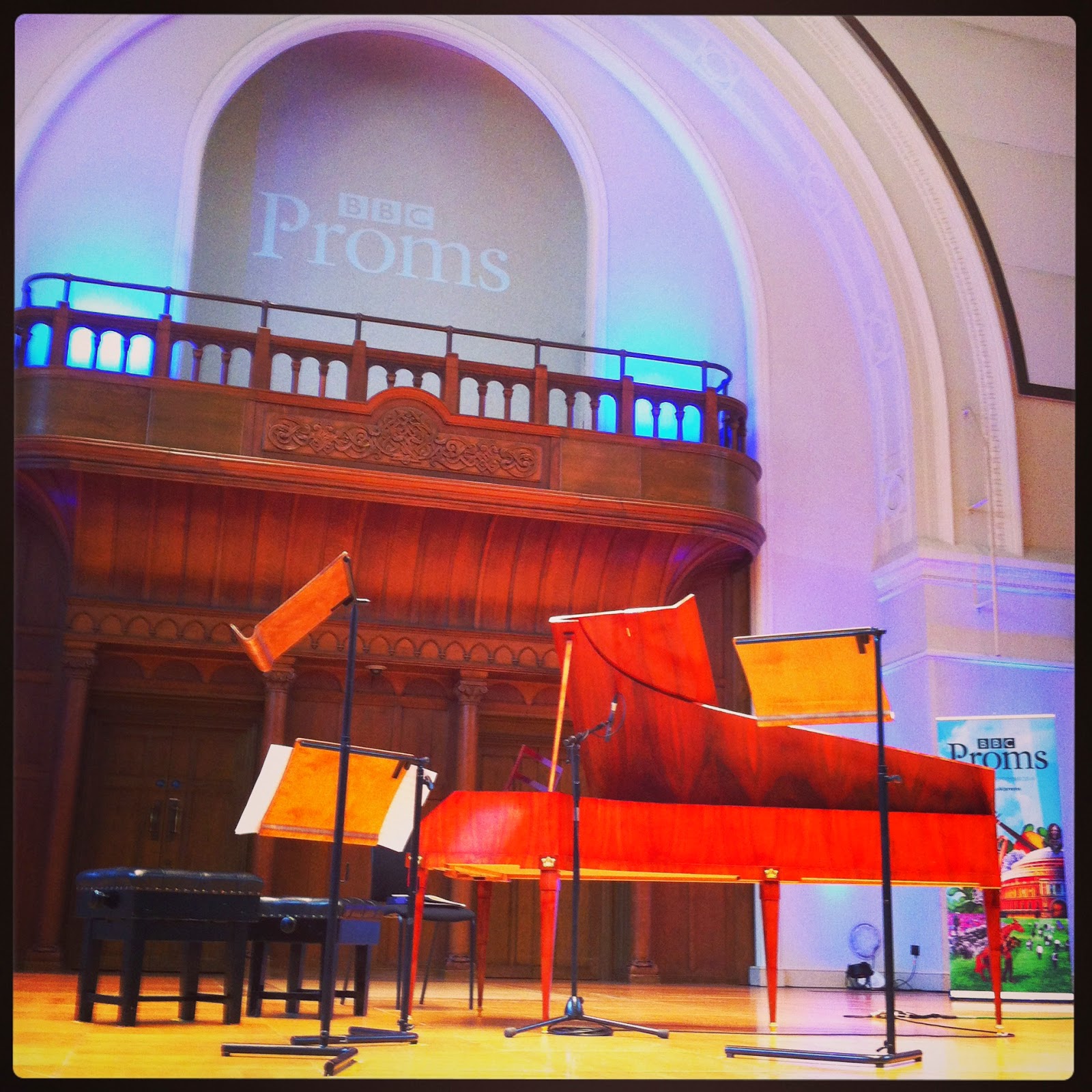 It's C P E Bach's 300th birthday year (obviously we're having to celebrate in his absence), and the anniversary has seen him creep stealthily into the spotlight that normally shines so brightly on his dad, J S. I've yet to explore his music fully but what I've heard appeals to me enormously. Clearly the paternal influence must have been monumental, unshakeable. But Emanuel's writing seems to reflect the recognisably Baroque flourishes he must have grown up with, merged with an almost rebellious "I'm going to do WHAT I LIKE" straining at the leash. Earlier this year, the harpsichordist Mahan Esfahani released a brilliant album of C P E Bach sonatas, and I overheard one concert-goer tell another how well they thought the playing on that record "tamed some of the madness" in the music.

Analysts poring over the wild moodswings in the music have begun to speculate that Emanuel, rather than living life in a permanent teenage strop in reaction to his intimidating pater, may actually have been bi-polar. This was just one of the intriguing snippets of information and insight from Rachel Podger, the violin virtuoso and Baroque specialist who had put together the programme and ensemble for the concert.

All the Proms are broadcast live on BBC Radio 3, and a feature of the chamber sessions is that the radio presenter is a bit more hands-on, introducing the performers and conducting mini-interviews with them during short breaks or change-overs. (This Monday it was Petroc Trelawny, to Mrs Specs's frankly unseemly delight.) Initially, this used to strike me as a bit cruel, like the musical equivalent of those dreadful on-court interrogations that take place ten seconds after the winning shot at Wimbledon - "what do you mean, you're out of breath - I need answers!" - but in Rachel P, we had a natural communicator and highly persuasive ambassador for the music.

She had put together the sequence of pieces carefully and cleverly. None of them had been performed at the Proms before (we're now on season 120), and to do them justice, RP had assembled a crack team including herself on violin, Katy Bircher on flute, Bojan Cicic literally playing second fiddle, Tomasz Pokrzywinski on cello and Kristian Bezuidenhout on fortepiano. I wanted to mention them all (and yes, I am painstakingly keying in the names from the programme beside me!) because they all brought something crucial to the enterprise. None of the four works used exactly the same combination of players, so everyone's contribution was vital.

The first two pieces highlighted the development between Emanuel's early and mid career stages. A Trio Sonata foregrounding violin and flute, begun in his early teens (and, suggested RP, benefiting from a few of Dad's hints and tips) sounded carefree and upbeat, an impression underpinned by the gossamer breath of the flute gliding above the other players. Fast forward thirty years to a violin sonata that gave RP the opportunity to show as much shade as light, and bring some of the lightning mood changes she was telling us about into focus.

Next, Kristian B took the stage solo for a technically demanding keyboard sonata, that really made me appreciate the skill involved in playing the fortepiano. I wasn't too familiar with this instrument - heard it a few times, never seen one played - and if I had to guess, it seemed to be the technological mid-point between the harpsichord-style keyboards and what we know as the 'normal' piano: a 'fuller' sound than its predecessors but not quite the lengthy, robust sustain of the modern instrument. As such, it's very well suited to the Baroque flurry of cascading notes that KB seemed to play with such ease, the signs of effort appearing only on his face from time to time, never his fingers.

Finally, all five musicians came together for another Trio Sonata, called 'Sanguineus and Melancholicus'. RP explained that the piece was written as a kind of 'duel' between two violins - one cheerful, one morose - the happier instrument trying to buck the other one up. The score is full of instructions for the two soloists on how to inject their parts with various emotions, and Emanuel's aim was to give these wordless sparring partners as much vitality and coherence of expression as you would expect from characters in opera.

The composer couldn't have asked for better 'actors' - to the point where it was impossible to imagine Rachel P and Bojan C swapping roles. As the last piece, the sonata clearly had an element of fun to it - with BC staring intently at his strings, resisting the irrepressible advances of RP, beaming, pretending to try and catch his eye, and even edging closer as if to give him a playful nudge. And Bach's achievement: to write such clearly distinct happy/sad melody lines and have them dovetail with each other so seamlessly that it all makes perfect musical as well as dramatic sense. An extraordinary finale.

While Rachel Podger is clearly a generous programmer and keen collaborator, there is something truly special about her ability to engage with us as well as her fellow musicians. I was reminded of a recent performance I saw of Messiaen's 'Quartet for the End of Time' which featured Steven Isserlis on cello - and he seemed particularly willing and able, of all four on stage, to involve the audience - to stare and smile them almost into participation. I felt that Rachel P and Steven I both possess that great gift of being so at one with - and at home within - the music that they have the spare performing capacity to make eye contact with the audience and let the music write itself across their facial expressions and body language as well as in the notes.

Performers like these make it as important and rewarding to see as well as hear classical music. 'Live' is good. Really 'alive' - even better.

(The concert is still on BBC iPlayer, and they're extending the 'listen again' period so that you have 30 days instead of 7 to catch each Prom after the event. So, until late August, find it here.)
Posted by Adrian at 15:00