Let me make possibly a bold claim: for the most part, we are quite happy with the idea that some people were born to write tunes, and others to put them across. In classical music (although numerous composers were more than able players), this is an absolute given. In folk and jazz, songs are handed down like heirlooms - often, the former aims to preserve them, while the latter tears them apart. Dedicated songwriting teams (Brill Building / Motown) assembled to provide ready-made hits for the charismatic label artists to perform. (And essentially laid the groundwork for the Stock Aitken Waterman / X-Factor machinery of recent years.)

Nonetheless, to many there is something sacrosanct about writer-performers. I don't know if there's an accepted starting point for this: it's tempting to thank / blame (delete as applicable) the Beatles, like one does for everything, or maybe Dylan. You could probably settle on a number of the great 60s acts as collectively hammering home the importance of playing your own stuff, and many of my own favourites (old and new) fall squarely into this category.

But for all that, I'm suspicious of this peculiarly 'rock' love of self-sufficient authenticity - especially since it gives rise to such deep mistrust of the 'covers' album. Fans hear alarm bells drowning out the music when such a project looms, fearing at best a lazy cop-out or worse, signs that writer's block has set in. But this doesn't explain why, say, artists who have gone to great lengths to carve out a distinctive sound are still drawn to the genre (Anna Calvi's new 'Strange Weather' EP), or why some of the more celebrated examples are by writers who are renowned for their own songwriting prowess (Elvis Costello, David Bowie). I think the truth is that great covers albums can shed new light on music in shadow, and restore your faith in an artist's genius in a way that sometimes even their own material cannot manage. Here are ten. 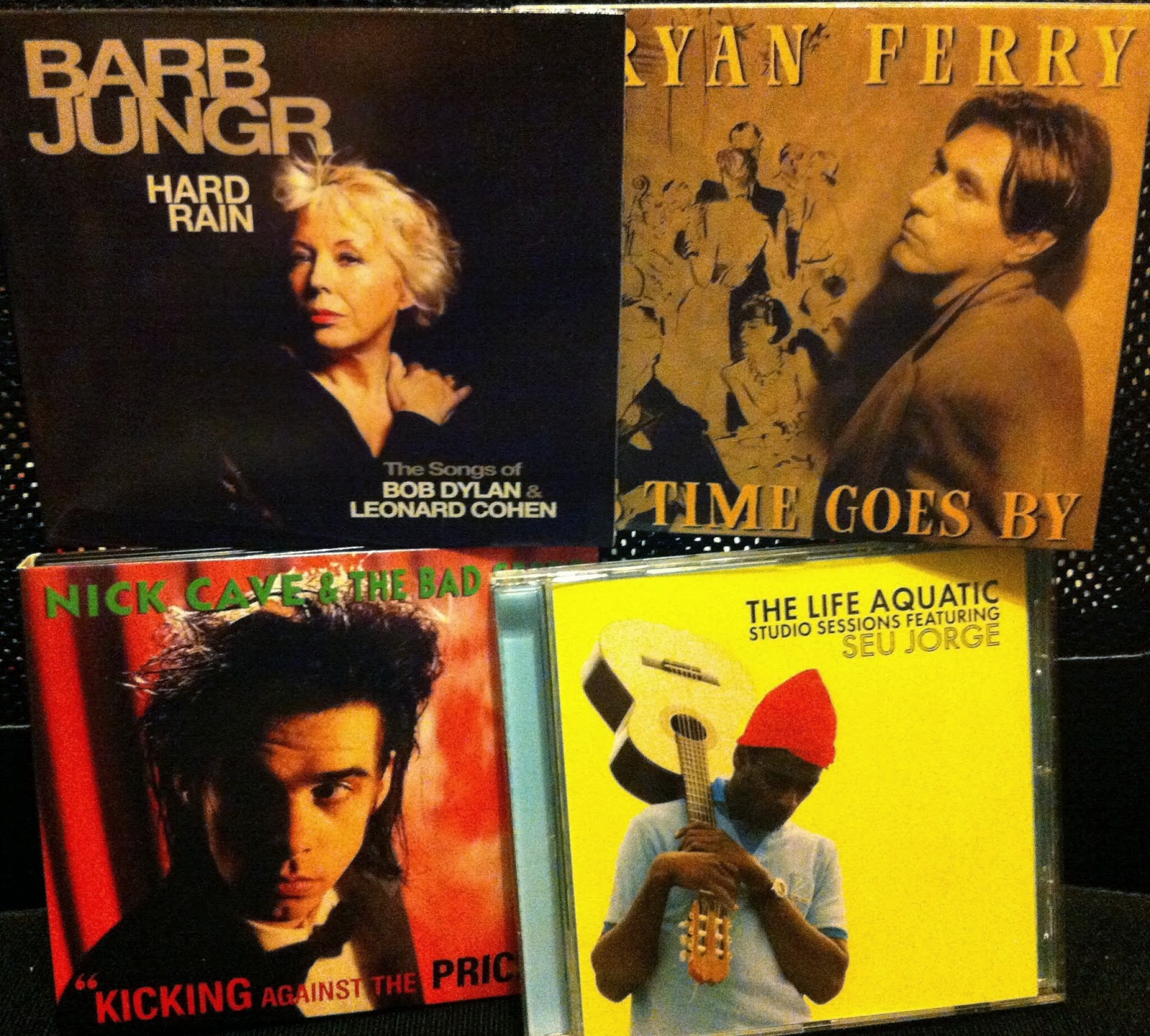 Nick Cave and the Bad Seeds - 'Kicking Against the Pricks'
This record is all about putting the Bad Seeds' unique sound on the map. Only four albums in, NC chose a set of stately, incantatory tracks, which provide a ready-made sense of eerieness and steady pace. Imposing choices like 'All Tomorrow's Parties' and 'The Carnival is Over' are like threadbare padded cells, and the band, barely confined, throw themselves against the walls. New member Thomas Wydler's drums contribute significantly to this: tribal, militaristic, unhinged. Never has sheer oomph sounded so oppressive.


Bryan Ferry - 'As Time Goes By'
Ferry is one of rock music's deliberate imposters. On his solo records (many released in parallel with Roxy Music's on-off existence), he's proved himself something of a covers addict, with albums full to bursting of other people's songs. Ferry's suave persona is so persuasive that this record seemed almost obvious - had he really not done it before? - but of course he is only a crooner in image, not in voice. Here, in jazz band settings, he is in fact high-voiced, breathy, almost fragile - making easy listening sound more difficult, personally felt and meant.

Andrew Bird - 'Things Are Really Great Here, Sort Of...'
Some of you will already know the highly distinctive spook-Americana music of Brett & Rennie Sparks, aka The Handsome Family. Bird probably knows it better than anyone, The Handsome Family included. An idiosyncratic singer, writer and fiddler who has guested and toured with (and already covered) the couple, and this record - out only this year - is his full-length tribute. The playing is immaculate. Bird is in love with these songs like they're an unknowable partner: he's utterly devoted but also daunted. Each track is a delicate re-arrangement as if he cannot bring himself to tread on the originals - titles, melodies are changed, as if he wants to give you a description of the thing he loves, but knows he'll never do it justice. (He does, of course.)


Janice Whaley - 'The Smiths Project'
A Californian vocalist steeped in UK alternative music, JW decided to record all 71 songs (in order) by her favourite band, in the space of a year (2010), using only her voice. Scale and skill go hand in hand, combining the purity of the harmony vocals (30 Janices at once in places), with the baffling range of sounds and beats she can conjure up with just throat and laptop. Thrillingly, just as The Smiths evolved and took such giant steps in their short time together, you can hear JW do the same. The band's music becomes the still point, and Janice moves from beautiful, ethereal takes on the debut album material to driving, swirling grooves on the later likes of 'Shoplifters of the World Unite' and 'A Rush and A Push...' She even speaks the samples on 'Rubber Ring'. Utterly beguiling.

Booker T and the MGs - 'McLemore Avenue'
Dazzled by the point the Beatles reached on 'Abbey Road' - where they had so many tunes, they could seemingly afford to chuck them into minute-long tracks and stitch them together like a patchwork - Booker T decided to cover the album 'whole'. This is genius for several reasons. To begin with, *all* of 'Abbey Road' is fragmentary - the band were falling apart, and even the 'full' songs are uneasy bedfellows. Seemingly recognising this, the MGs knit almost every track into long medleys, treating all the tunes as if they were part of that Side 2 sequence. They also pull off a brilliant 'cheat' by leaving out three full tracks: screamfest 'Oh Darling' and the whimsical 'Maxwell's Silver Hammer' and 'Octopus's Garden'. This cruel but careful edit, coupled with the fact that the band are instrumental, make this a streamlined, bonkers-light rendition. The band are as tight as ever, with guitarist Steve Cropper stealing the show as usual, switching between melodies, solos, and stabbing riffs without sounding like he even has to move.


Easy Star All-Stars - 'Radiodread'
This group specialises in reggae versions of entire albums - they kicked off with 'Dub Side of the Moon' and their most recent is 'Thrillah'. Whether this is 'trademark' or 'gimmick' is down to personal taste, but on this track-for-track cover of 'OK Computer', they identified that cavernous dub bass and vocals suffused with wary ennui were perfect for conveying the original's sense of, er, dread (sorry). Opening track 'Airbag', with Horace Andy's divine voice, is a particularly good example. It's also crucial (sorry), that where flashes of wit appear - in particular the way that horns come in to replicate some coruscating guitars or effects, like sunshine failing to dispel cloud - the humour is aimed at reggae, rather than Radiohead. Skilfully done.

Peter Gabriel - 'Scratch My Back'
The entire album is orchestral. However, these are bold contemporary arrangements - not just the 'adding strings' cliche - and because they're applied to rock songs, they have the cyclical feel of minimalist classical works. Play the opening of Gabriel's version of Regina Spektor's 'Apres Moi' next to a bit of John Adams's 'Shaker Loops' and you'll hear what I mean. There even seems to be an underlying theme of PG (Mr WOMAD) choosing some Western artists who employ international musical flavours - Paul Simon and Talking Heads, as well as Spektor - and stripping away the exotica to see what happens. Deep and uncompromising.


Seu Jorge - 'The Life Aquatic Studio Sessions'
Included partly due to sheer loveliness, this is the album borne from Jorge's character in the 'Life Aquatic' film performing Bowie songs in Portuguese on an acoustic guitar. I love the way this record makes the songs seem alien again now we know the originals so well, with all the 'Bowie' stripped out of them - and Jorge's magnificently fluid playing is a treat in itself.

Tortoise & Bonnie 'Prince' Billy - 'The Brave and the Bold'
At face value, this could be the most arch record ever. Two defiantly avant-garde acts - post-rock instrumentalists who don't really do 'songs' backing a wilfully eclectic, experimental singer - presenting a track listing including numbers by Bruce Springsteen, Elton John and Richard Thompson. Admittedly, they include some more obscure choices - Melanie Safka, Minutemen, Lungfish - but you could be forgiven for assuming the album mainly consists of 'mucking about'. Instead, the collaborators tear into the songs with wilful sincerity. Tortoise couldn't sound like a normal group if they tried, so the band feel their way around the tracks, sometimes meandering towards the doorway, at others smashing it down, with BPB giving one of the most sustained, committed vocal performances of his career. Musicians starting from 'out there', wanting to come inside for a while.


Barb Jungr - 'Hard Rain'
Another very recent album, but an instant classic. Barb Jungr - a singer and writer who patrols the territory between jazz, folk, rock and cabaret - is a matchless interpreter. She can take any given song, it seems - especially if written by a man - and invest it with warmth and vulnerability without losing any of its bite or resolve. This particular record's theme is the political songs of Bob Dylan and Leonard Cohen. The chamber arrangements by Simon Wallace - sensitive yet sinister - pull you ruthlessly towards the harsh messages with rolling yet restrained piano and otherworldly flourishes of shakuhachi (a Japanese flute). You wouldn't think 'Blowin' in the Wind' could be re-invented, but they do. A concept, protest album that brings anger back from the past to rage against the same issues in the present.


Many thanks to Magnus Shaw of the superb Rocking Vicar website for the conversation that sparked the idea for this piece.
Posted by Adrian at 14:16