I love mazes, and I'm at the stage where classical music, to me, is a bit like a maze. I've already set off, and left the entrance a long way behind. When I reach the centre, I'll have hopefully built up enough listening time and knowledge to truly know my tastes and preferences. On the way, though - there are all these detours, side turnings, that take me off in unexpected directions. Sideways, rather than forward or back. The only real difference is that none of these non-linear excursions ever feel like a false start, or dead end. Quite the opposite.

I'm certain that this is happening with my opera listening (and going). It's no secret that I'm drawn to a lot of extreme music, but I still took myself a little by surprise when I plunged into my first serious live opera in years with the full Ring Cycle at the Proms. Since then, 'Elektra' and 'Wozzeck' - both short, sharp, one-act intensities, exhausting but exhilarating - have turned up at the Royal Opera House, and I've flung myself at them gamely while still not knowing one end of a magic flute from the other.

Thanks to a few CD and DVD purchases alongside visits to the Amphitheatre, I'm filling in some of the Tosca and Traviata-shaped blanks and trying to widen the field right out - all the way from A(dams) to B(ritten). One composer, however, has had a tighter grip on me than most: Richard Strauss.

Good timing, as it turns out - it's RS's 150th birthday year, so there is plenty of live Strauss on offer, as well as a steady supply of new recordings. The Royal Opera scheduled three Strauss productions into their 2013/14 season: the 'Elektra' I saw last year, 'Ariadne auf Naxos' in the summer, and in between those, 'Die Frau ohne Schatten' ('The Woman without a Shadow'), just coming to the end of its run.

'Die Frau' was one of the most extraordinary experiences - opera or otherwise - that I've been privileged to see. Claus Guth's production looked incredible - as much due to the lighting and costumes as the sets, with animal heads and wings marking out the spirit characters, and clever, unfussy moving parts to the staging so that characters could ride or glide as well as just walk. Video projection (in particular, a giant, beckoning hand) increased the otherworldly atmosphere. It felt surreal, but not unreal. 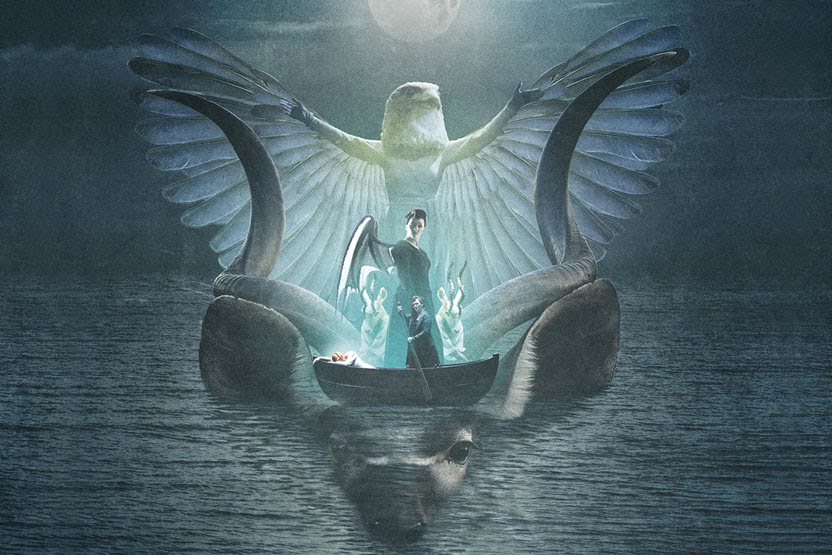 But that just served to enhance an opera that can well look after itself. It's an original, adult fairytale - in a few sentences, the plot has a noble woman from the spirit world married to an Emperor in ours. (They met when he shot her in the form of a gazelle, but any 'issues' they might have about that romantic encounter are the least of their problems.) The lack of shadow is a motif for infertility - I wonder if this idea came from the slightly larger shadow a woman casts when pregnant? Anyway - as she cannot seem to conceive, the king of the spirits, or 'Dad' to the Empress, will take her back and turn the Emperor to stone if they can't solve the problem in three days. The Empress's nurse, who is one of the spirits, despises humanity and as such is the nearest to an actual villain of the piece, helps her come up with the idea of stealing a human woman's shadow. The targets of their scheme, the dyer Barak and his wife, really are having issues. She is depressed and ill-at-ease, and he cannot understand her or find a way to get through to her. As such, Barak's wife is at first willing to give up her shadow (and therefore any future chance of having children) to lead a more dissolute carefree existence, until Barak asserts himself and she sees there's more to him than she realised. All the characters fall under threat from the spirit world as the deadline closes, but the Empress ultimately decides that she will not take the shadow at the expense of the human pair's happiness. In return for such an unselfish and humane choice, she is granted the shadow anyway and both couples are happily reunited.

For me, the genius of the opera is how the emotions and reactions of the characters are drawn so accurately, and feel so true, that it transcends the fantastic nature of its setting to become intimate and heart-rending. The words could not do this alone, of course, and the orchestra under conductor Semyon Bychkov were enthralling - over 100 in the pit, but playing with delicacy as well as power. On stage, passages of extraordinary beauty are given to Barak and the Empress in particular, and the baritone Johan Reuter and soprano Emily Magee gave unforgettable performances in the ROH production - Reuter during Act I in particular at his most loving and perplexed.... and the Empress dominating Act III as she builds to her decision. Magee also moved subtly, yet brilliantly, as the Empress - caught between the two worlds - would mirror the actions and mannerisms of both human and spirit characters in turn.

Even before the opera bug truly took hold, I was in thrall to Strauss, thanks to my highly unscientific 'maze' approach. Falling for the alluring tones of soprano Renee Fleming, I soon discovered her recordings of the 'Four Last Songs' and then, the Strauss opera heroines. At Proms and Southbank concerts, I'd always enjoyed the orchestral works I came across, with their tendency to get a full evening's work out of the percussionists, lamping various bits of sheet metal or similar to produce the atmospherics Strauss heard in his head.

I wonder if, in fact, there are several underlying factors that combine to make Strauss a unique figure. I can come up with three, I think, but there may well be more:

1) Living 'post-Wagner'. After Wagner's music dramas - which blew convention out of the water and paved the way for ultra-demanding roles, loss of the big-hit arias, and so on - opera composers were working in a new environment. As much as I love Wagner's operas, as a pioneer he endures the textbook problem of those coming after him building and developing on what he did first.

For all the innovation, the ongoing Wagnerian cliche is that you *can* always tell it's Wagner - even his comedy, the 'Mastersingers', is a huge, imposing beast. Strauss, on the other hand, is like a chameleon, changing with every opera, from the relentless stridency of 'Elektra' to the yearning beauty of 'Frau'. And he clearly enjoys experiments with form and structure, even making them part of the plot - the framing story of 'Ariadne', say, or the battle between words and music personified in 'Capriccio'.

2) Why does Strauss, in particular, seem able to create an utterly convincing musical setting whatever the subject matter? One element, I'm sure, must be his relationship with his regular librettist, the marvellously-named Hugo von Hofmannsthal, who was himself an ambitious dramatist. They seem to have enjoyed one of those ideal collaborations (for the work, at any rate) where the balance of mutual respect and creative friction was just right to bring out the best in each other.

No matter how thorny an issue H von H wanted to tackle, Strauss found music to match. I can't help thinking that Strauss's ability to create operas in such a variety of styles must be linked to his tone poems. An absolute master of the form, he can place you in a scenario with music alone: the changes in weather and time of day in 'An Alpine Symphony', the transitional jump from dying throes to serene afterlife in 'Death and Transfiguration' - and perhaps most famously, the dawn in the opening moments of 'Also Sprach Zarathustra' (used at the start of '2001: A Space Odyssey').

Strauss can lay claim, I would've thought, to being the most important composer of opera since Wagner (I've read it implied in one of my *ahem* 'big books of opera' that Strauss and Britten lead this charge with no serious competition - feels controversial).... and possibly the pre-eminent tone-poet of all time. This can't be a coincidence. Is it any wonder that such a great painter of sound, who can evoke almost any image with just the orchestra, can produce even greater things with the extra stimulus of some extraordinary librettos as well?

3) I was struck by the complexity, resilience and three-dimensional, realistic appeal of so many of Strauss's female characters. Opera loves its tragic women, for whom it's so often curtains before the curtain, even in works that, in many other respects, are full-on, modern, challenging and radical. Berg's 'Lulu' and 'Wozzeck', Bartok's 'Bluebeard's Castle', say, around Strauss's own time.... through Poulenc's Carmelites in the 50s - and it's tempting to add honorary 'heroine' Billy Budd here too, given Britten's sexuality and characterisation of the sailor boy - to extremely recent (and highly lauded) works like 'Anna Nicole' and 'Written on Skin'. The female lead pays the ultimate price.

So, Strauss seems to take a gloriously singular path in this respect. While, of course, the libretto (rather than the score) is home to the plot, Strauss's strong women motif remains in place across more than one librettist - implying that stories or sources that featured characters in this line appealed to him.

Even the ones that don't survive drive the action, often in fascinating and unusual ways. 'Salome' being a case in point, with her full-on sexuality and lust for violence (not to mention a bit of light necrophilia) scaring the opera glasses out of the 1905 audience. A few years later, 'Elektra' followed. For me, Elektra's demise is actually one of the most intriguing deaths in opera, since it isn't actually demanded by the plot or the root myth. It's as if Strauss and H von H step outside the story for a second to make a psychological point that as revenge was all that Elektra lived for, she could have no real existence once it is wrought. There is something truly tragic - and deliberate, I'm sure - about the way the men of the family bookend the opera. The famous opening 'Aga-MEM-NON' orchestral blast (where Strauss literally makes the orchestra 'speak') eventually leads to the final word of the opera, 'Orest', sung by Elektra's weaker sister. Once Elektra's force of nature has been extinguished, the focus snaps back onto the blokes.

But moving away from the blood and guts, some of Strauss's best-loved and most beautiful female roles show women in control - who do not succumb to unthinking passion, let alone a violent death, but instead assert their insight and independence: the Marschallin in 'Der Rosenkavalier' (the opera directly following 'Elektra'!), Zerbinetta in 'Ariadne auf Naxos', the Empress in 'Die Frau' ... and perhaps most of all the Countess in 'Cappriccio'. Her gorgeous final soliloquy - which I think Renee Fleming calls a 'gift' from the composer - has her leaving the audience hanging in the same way as she has her two suitors.

'Modern' can be a horribly misused word - I'm thinking particularly of when detractors of 'modern music' or 'modern art' are trying to make out that by definition it's tuneless rubbish or shapeless scribbles. To me, though, Strauss's work feels genuinely modern, even within fantastical or mythological settings: he embraced the frank, up-to-date issues his librettists wrote about, and crafted music to match the psychology and emotion, rather than convention. His work is both serious and mischievous, and musically he is able to commentate on the action as well as support it. Take advantage of any enticing looking productions or recordings you see emerge during Strauss's year 150 - you'll be listening to them for a lifetime.

(The image is from the Royal Opera House website, promoting the production.)