Now for something a little unusual for the Specs blog. I'm writing about something that hasn't happened yet. Bear witness: I have summoned all the clairvoyant powers at my disposal (modest, but effective) to tell you how brilliant a particular concert is going to be - at the Garage, Islington, just over a week away, on Sunday 4 May.

Oh, ok, then, I'm cheating - at least, partly. Back in February, I wrote about a stunning evening of music at the Lexington featuring the Greek band Daemonia Nymphe, with Seventh Harmonic and Jo Quail. In a slightly unusual turn of events, the gig coming up on Sunday the 4th has exactly the same supporting line-up.

In that post, I tried to describe why what I heard was so affecting and powerful - so please take a look if you're curious. Then pop back here, and on this occasion I'll try and let the sound do more of the talking.

Those of you who drop in here regularly (thank you, darlings, thank you) will already know how much I love Jo Quail's music. This is a clip I don't *think* I've posted before - one of her most beautiful tunes, I think. I'm always struck by her ability to write multiple melody lines - classics by themselves, in miniature - that weave together with such harmony; and then to be able to realise it live with such expressive cello playing while in command of an array of loop pedals. Brilliant to listen to, captivating to watch.

I also can't wait to hear Seventh Harmonic play again. An orchestra and chorus trapped inside a band, they conjure up a powerful, enormous sound - part rock (drums, bass) and part classical (strings, vocal) but they stand out because the mesh is perfectly wrought and watertight. There's no hint of a join, or of tunes that belong on one side of any genre fence being dragged over to the other - it's seamless, and as a result, involving and inspiring. I'm pleased to get a second chance to hear them so soon after the first: a chance to focus. This track, 'Winter', was played live last time with Jo Q guesting - so hoping for a repeat of that!

And finally - the headliners, a French band called Rosa+Crux.... well, they're a mystery to me. Here's a track I found on YouTube which certainly ticks a lot of my boxes - rhythmic, percussive, darkly exotic. And I hear the live shows can be 'flamboyant' to say the least. It's the first time they've played in London, and the only UK show booked for the time being, so I'm very keen to check them out.

So, come along if you can. With luck, you won't even have work the next day. AND - here's a link to get discounted tickets: http://www.eeetickets.com/JQ.htm. It's almost as if this edition of the blog comes with a free gift. That costs a bit of money. But you get the idea.

Hope to see you there!

...And you can find out more about each artist at their websites, of course: 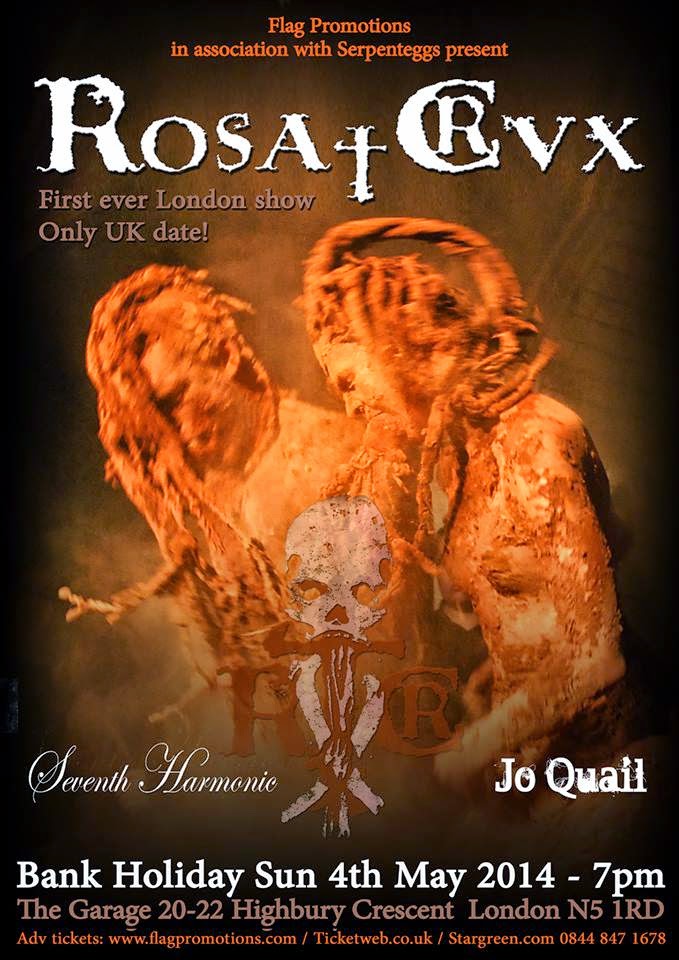