Water, colours: Turner and the Sea

A couple of months ago, I went to 'Art Under Attack' at the Tate - and it felt to me like a museum exhibition, slightly out of place in a gallery. (I wrote about it here.) This time, seeing 'Turner and the Sea' at London's National Maritime Museum, it was almost a reversal of that experience: an art show smuggled into a museum. As a result, it told its story in ways that helped me to see the paintings afresh.

The running order was broadly chronological, which might not sound like an especially dazzling decision. But when there is a relentless focus on one genre - so, here, seascapes - it makes it much easier for appreciative amateur critics like me to see exactly how the artist developed. The room of early works gives every indication of a talent fully formed, those dark waters swirling and swallowing hapless seafarers already in evidence. But on the way to the later pieces, where the waves seem to consume the whole canvas and wash much of the realism away, the exhibition takes a few intriguing detours.

This is where the museum approach kicked in. Three rooms are particularly concerned with placing Turner firmly in 'art history' context. Two of them (and I was thrilled with the nice wordplay on display here) look at what you might call the contemporary scene: 'Charted Waters' presents a selection of sea pictures by artists already active when Turner began exhibiting and, for the most part, he does - *ahem* - blow them out of the water. There is only one Turner work in that section, 'Fishermen at Sea', but it towers over almost all of its room-mates. Later on, 'Contested Waters' again brings in paintings from other artists who by this time were competing with an established Turner for public acclaim. As they imitate him, he tries something different, unconventional, and accordingly, edges ahead.

I wondered aloud about whether the inclusion of so much work by other artists actually detracted from the exhibition (especially given its title) but Mrs Specs pointed out, rightly (which is Mrs Specs's default setting), that it was the best and most effective way of showing just how accomplished Turner was. The only time I thought the approach really did lose its way was in the 'Trafalgar' room. Again, the clue was that I was in an institution dedicated to oceangoing and with that, inevitably, comes war at sea. An entire room is given to Turner's huge, complex painting of the famous battle, with other artists' treatments of it placed nearby for comparison. While I admired the picture, the need to portray the scene with a certain amount of accessibility and respect seemed to rein Turner in somewhat, and lead him to produce a piece that was more like his contemporaries' efforts than usual. At the same time, the final room, which contained a selection of his final, and therefore most distinctive and innovative canvases, was tiny - hung with more or less the minimum space needed to physically fit the group of paintings on the wall. 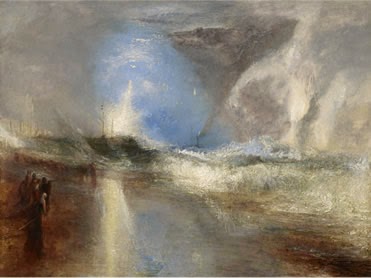 This minor bit of brow-furrowing, though, was soon forgotten when losing oneself in the sheer exhilaration of the closing sections. Even though there wasn't much room to step back and admire them, that final group of pictures (under the title 'Making Waves') manages to sum up the extraordinary advances Turner had made from those early works. How he could make the sea - whether calm or in turmoil - a totally abstract form. How he could contain such a riot of shade - not just colour, but black, white and grey - and variations in texture into a convincing whole. You feel like you are looking at something and nothing at the same time.

Most revelatory for me was the penultimate room, 'Imagining the Sea'. This large section primarily contains material from the Turner Bequest (the final inventory of his works left to the nation) - and features studies, drawings, sketchbooks and watercolours that have been seen very rarely (if at all) in comparison to the major works.

Seeing these lightning trial runs, flashes of inspiration translated into a few hurried lines on paper brought home to me, even more than the proper 'climax' in the final room, how Turner is one of those geniuses who seem to look forward as much as they look back. Yes, his techniques were innovative, but with our luxury of hindsight, they also seem predictive - beyond the Impressionism he's sometimes said to inspire. Sometimes this seems obvious, maybe - sketchy, jagged lines across pale backgrounds anticipating Twombly, say, but still anchored in evoking a real vista. Elsewhere, pale washes of empty sea and sky make it almost impossible to believe that Rothko cannot have stared at these studies for hours.... or Whistler may not have come here for his nocturnal watery-blues. It's a pleasing paradox of the exhibition, that by locating Turner so firmly in his historical and artistic tradition, he seems more timeless than ever.