No art is truly passive, or one-way, I would say - and going to any exhibition, you're as likely to learn something about yourself as you are the artist or theme of the exhibition. I've never come away with a stronger impression of this than after seeing 'Sensing Spaces', showing currently at the Royal Academy of Arts, London.

Architecture falls within the RA's scope, but the closest brush I've had with it until now was the occasional visit to its Summer Exhibition, where a room or two would be devoted to fascinating draughtsmanship and scale models. For this extraordinary show, the RA invited seven architectural practices (worldwide) to create installations specifically for its main galleries. To quote from their website introduction, "we invite you to consider some of the big questions about the nature of architecture. How do spaces make us feel? What does architecture do for our lives?"

I think this is a laudable aim, and the show certainly made me consider these points seriously. There is something magical about interacting with something you primarily feel you are there to 'view', something still slightly transgressive about being allowed to step over the string and get a closer look. The fact that I could wander through all these exhibits without exception made me feel like the gallery had become a kind of form and function wonderland, one highlight of modern living after another. But I found that - with one possible exception, which I'll come back to - this was not architecture relevant to my life. Instead, I felt that this show was the natural result of what happens when you ask architects to make 'art'. 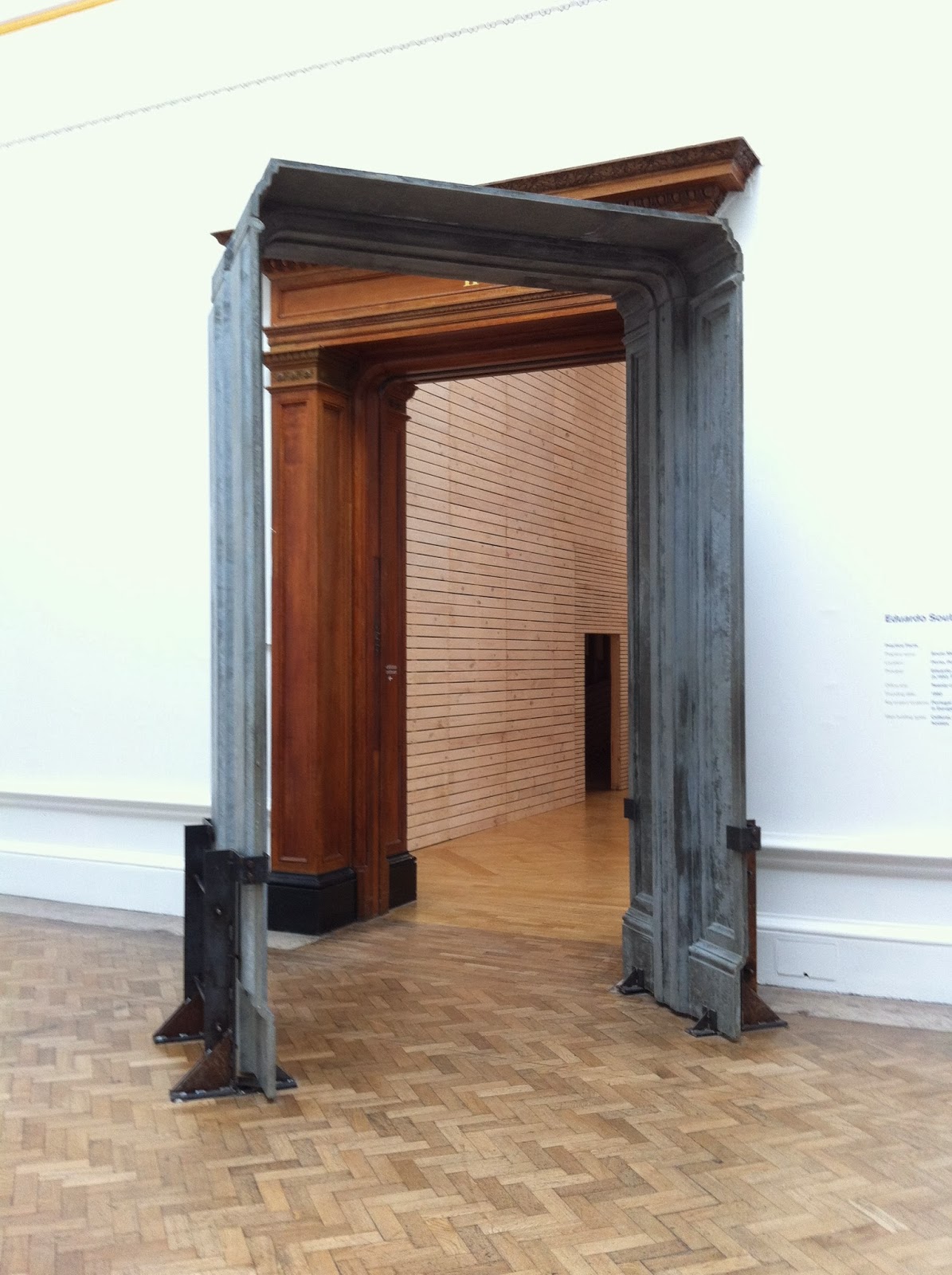 This doorway by Eduardo Souto de Moura is a case in point. Imagine being an architect but having the freedom to create something you know won't have to stand up for ever, actually house anybody or anything, or withstand any kind of weather or real wear and tear. These metallic replicas of the actual RA wooden doorways had it all ways. Ranged at a slant to the originals, they played with your sense of depth and pulled you sideways into the room at a certain angle - it was almost impossible to resist walking through them, even though there was no physical need to do so. As a result, they told you something about how architecture can play with perspective to give the illusions of paths and corridors, and also about how we 'obey' this perspective and allow it to dictate our movements. There was space all around us in the gallery, but we imagined and followed our own restrictions under the piece's influence.

Pezo von Ellrichshausen created the huge structure in the photo below. Free-standing (I believe) but colossally impractical, it guided viewers up spiral staircases (inside the cylinders) and down others. For disabled access, a ramp zig-zagged up to the top, enclosed behind that flat wall you can see at the back of the image - but at an epic length and in near-darkness. Even once you reached the top platform, the wall was so high, you could only really focus on the RA's ceiling. In other words, this building felt like a trick: fun, and even quite pleasant... But architecturally (and deliberately, I'm sure) 'wrong'. All form but no function, and it seemed gently satirical to me: thanks for asking, RA - but if you contain architecture within restrictions like this, you can expect only the most limited results. As a piece of art, though, it's quite lovely - drawing the gaze (and the photo might not make this clear, but it doesn't take up that much of the room, by any means) a bit like the pyramid in the centre of the Louvre, say. Those straight lines coming to a point, a challenge to the curved alcoves in the ceiling. 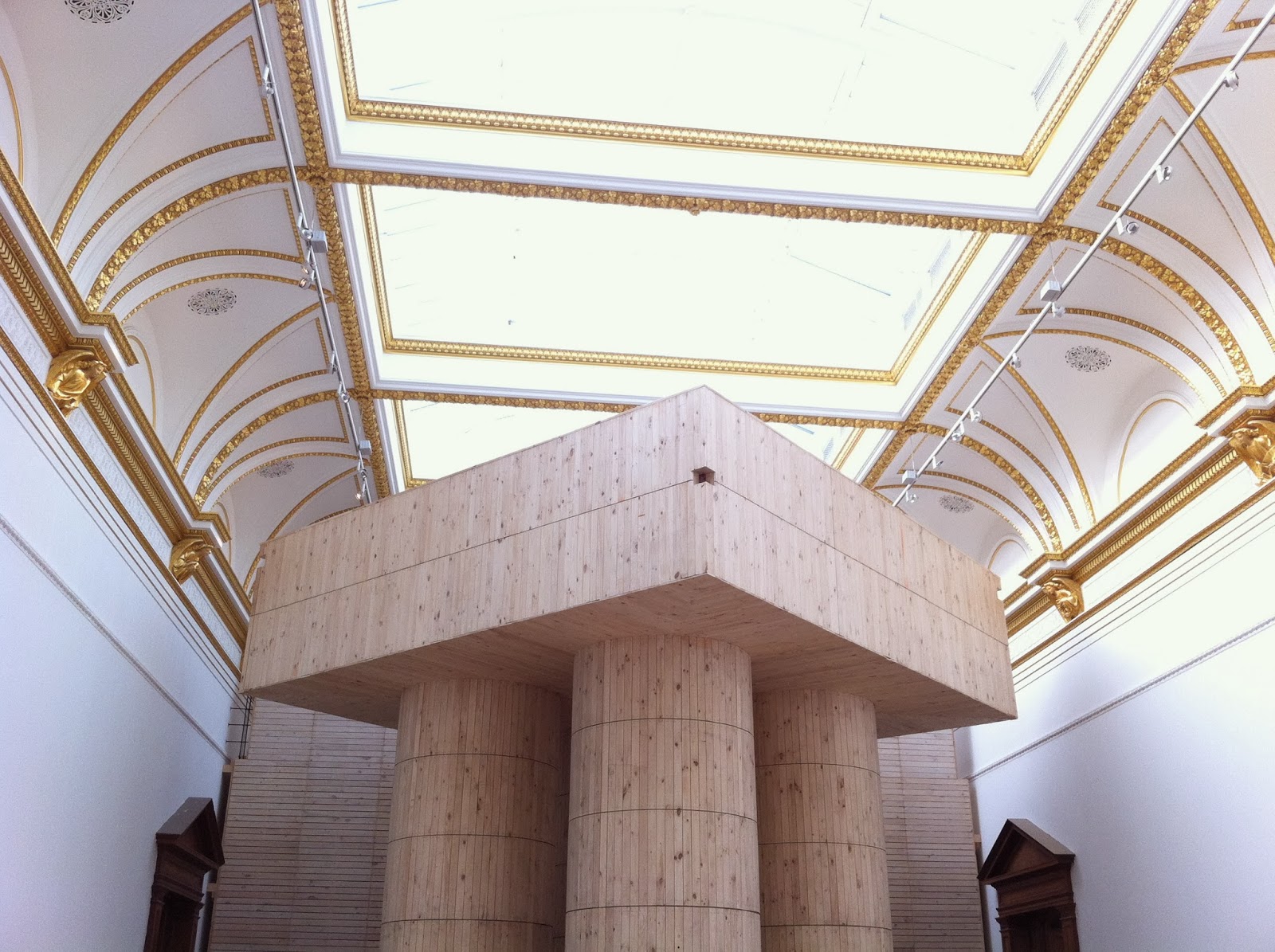 Talking of ceilings, Grafton Architects﻿ seemed to work downwards, with two perplexingly different rooms. One of them had descending beams in a line, falling to various heights, which mostly made parts of the room feel a bit claustrophobic. But then, you walked into this room, below: 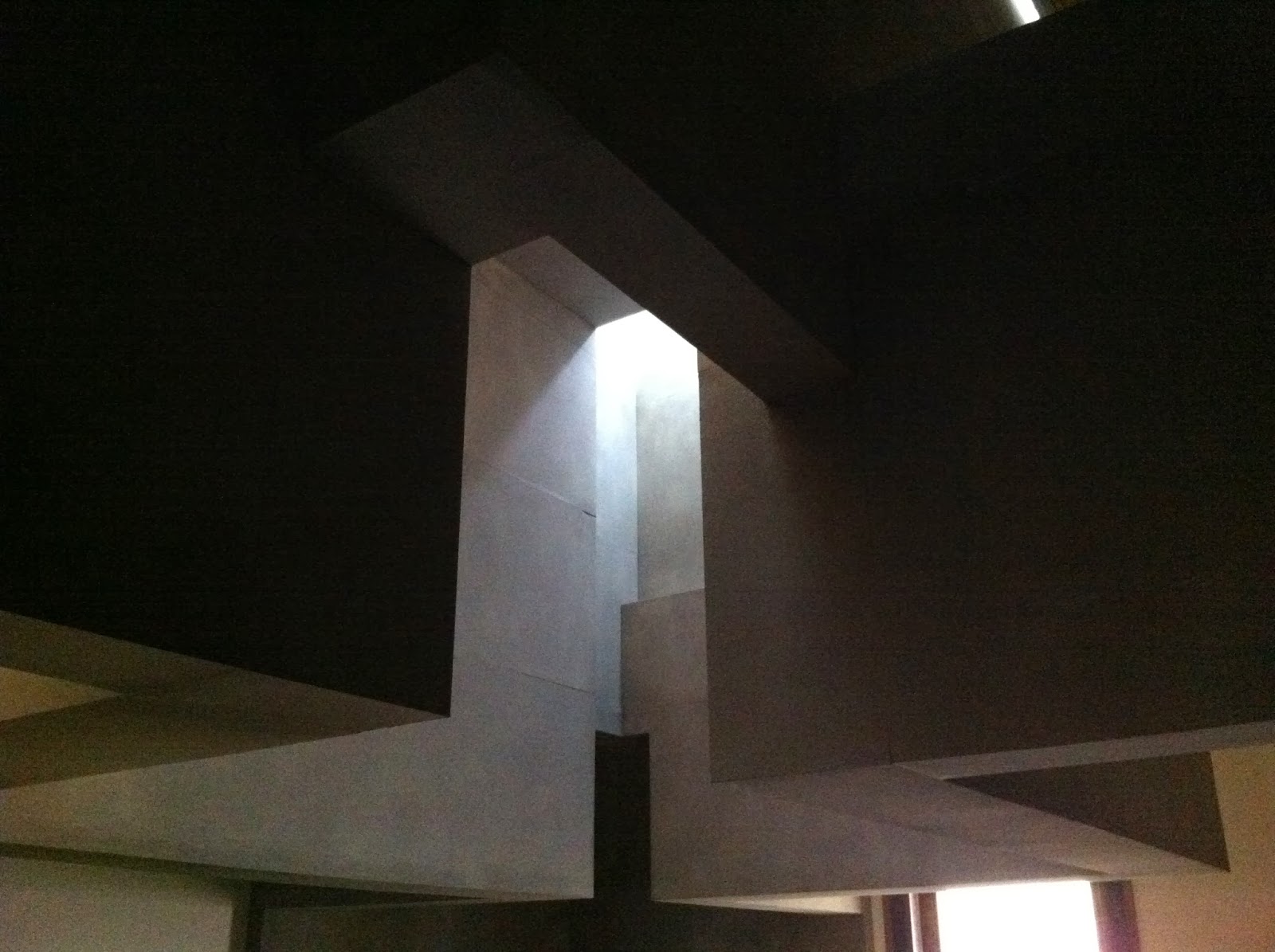 ...as if to say, "but we can also do THIS". Taking the basic pattern of their other room and applying the same approach but with a greater variety of angles, this was where we really got to see how the style manipulated the light - as though they could control the illumination in the various corners of the space in the same way that one might switch on an artificial lamp or light switch. And again, as if entranced, I found myself gravitating towards the areas containing the level of light that suited me personally - no great shock, perhaps, but why? There were seats around the edge of the room, and doorways at each end giving me an obvious straight line to stroll down. But no, everyone went off-piste, searching for the area of 'nothing' that suited them.
﻿
For me, the unquestionable highlight of the exhibition was Li Xiaodong﻿'s installation. At the 'fun' level, this was essentially a maze: a series of actual corridors made out of hazel wood, but with illumination from below (soft white LED floors). Walking through led to small rooms and a miniature courtyard. While I enjoyed experiencing every exhibit, this was the only one that felt to me like a template for possible living. At once natural and synthetic, restful but stimulating, on a grander scale this could easily be developed into the space-age Oriental house/garden of one's dreams. Fanciful, perhaps, but this room manipulated me into nothing but delight. It made me think about how my environment can improve my well-being, influence the way I live. The floor lighting meant good visibility without any strain or glare to the eyes; the wooden walls and stones used in the central yard gave the aura of the outdoors venturing inside, and as a result the relatively enclosed spaces felt airy. The tightly-wound construction made for pleasingly unified 'art' in itself, but it made function feel like something form could aspire to. I've mentioned my particular favourites here, but the other rooms all contained intriguing installations that combined interactivity and installation art to winning effect. There are a few weeks to go, so get along there if you can. If you know a bit about architecture, brilliant. If you don't, better still.

(Photos are my own, squinting gamely into the rear end of my smartphone.)
Posted by Adrian at 15:56