Pals of mine on the Earth's surface, away from cyberspace, will know that I love 'Doctor Who', almost beyond reason. Peter Capaldi, who becomes Doctor no.12 later this year, is the first new arrival to the role since I started blogging, and I'm basically unable to resist posting about it. Intriguingly - and I realise my impression of this all depends on which articles and websites I happen to see, and who's sending their opinions into my Twitter and Facebook feeds - the usual desire/debate about the Doctor becoming anything other than a white bloke seems to have reached something close to fever pitch this time round. I don't really know why this is, but it's made me think long and hard about the show, and about how and why it's worked since it regenerated itself back into life in 2005.

My upfront disclaimer should read something like this: I've found something to enjoy in pretty much every Doctor Who episode I've ever seen ('classic' and 'current' eras), and I'm not terribly interested in picking holes in the series to justify why it's never been the same since [insert year/Doctor of your choice]. So please take my musings more as observations than criticisms, because no idea or development that has seemed to me odd, out of step, daft or over the top has ever stopped me just revelling in the sheer Who-ness of what I'm watching - and happily allowing myself just to be glad and thankful that it came back at all. 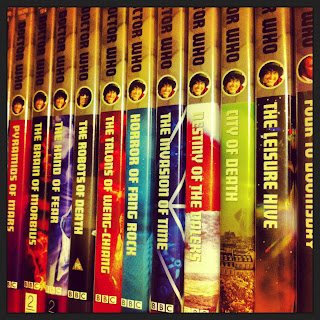 So with that in mind, if (when?!) they do cast, say, a female Doctor, 90% of me would be totally thrilled - exhilarated that whoever the showrunner is at the time has the guts to do it, and excited about where it will take the series. But the other 10% will be fighting back a sense of disquiet - because it strikes me that it might be more sexist to cast a woman Doctor at this point than a male one.

Those who reject the idea out of hand can probably point to nuggets of info from the series itself for arguments. The Doctor has always been male, up to now. (If he'd always pinged back and forth between genders, things would be very different now.) He's a grandfather. He's always been straight (you might think Tennant and Smith have been 'goers' but Hartnell pulled in 'The Aztecs'). Time Ladies - sorry if that's a bit Downton, but I have no idea what else you call a female Time Lord - have so far regenerated into new women. None of this represents any reason not to change it, but you would need to deal with it. Yes, 'the Doctor's an alien, he/she can do what he/she likes' and you could throw the entire continuity out of the window, but I don't think many of the fans, male or female, would actually want that. A woman Doctor - yes, please, but with a proper explanation; something fully and consistently worked through that fits with what's gone before.

Otherwise - do you not risk making the Doctor female for politically correct purposes only - and as a result, end up casting a woman in unwittingly tokenistic fashion. Should we 'absorb' her into a male part, and attach her unceremoniously onto the back of at least 12 male interpretations? Obviously, there are plenty of actresses who'd turn this into something amazing, but sadly, they would probably be doing so for a male showrunner, with a staff of mostly male writers, who are unlikely to write a woman Doctor very much differently from a male one. Which would be a waste. Basically: I don't think a woman Doctor would hurt the show at all. But I think the show could hurt a woman Doctor.

I am fascinated by the idea that the programme's flexibility - you could do anything you like with the main character because he changes - has led to people almost expecting it to shoulder a 'right-on' burden. (No-one is really expecting a Jemima Bond, or Dreadlock Holmes anytime soon. Although I would definitely like to see the latter swapping his cocaine for weed, and taking weeks or possibly months to solve a 'three pipe problem'...)

I think with Who, this is something that has gone hand in hand with the 'soapification' of the show since it came back - because soaps deal with 'issues'. Don't get me wrong: I feel the emotional heft of the new version, and looking at companions' lives outside the Tardis etc has proven to be a sophisticated way of modernising the old warhorse. But it has meant the show has sometimes felt like Sons and Doctors, or Extermination Street.

When things got a bit sensitive in the old days - say, Pertwee's Third Doctor in anguish at Jo Grant leaving to get married - they were moments of rare import. But Russell T Davies (surely the most PC, on-message showrunner they could possibly have chosen), ramped it up to unprecedented levels once the enticingly dark Eccleston incarnation left and David Tennant stepped in. Here was the first 'matinee idol' Doctor. His first two companions fell in love with him. To break away from this, they installed a comedian as his third companion, as if anyone who didn't fancy him had to be a bit of a loon. (Thank heavens for the brilliance of Catherine Tate.) Dara O Briain's 'something for the Dads' routine where he pours scorn on the use of sexy female companions is accurate and hilariously told, but it doesn't quite cover the fact that we've also had a hell of a lot of Sexy Doctor. Also intriguing that the leading gay character was made outrageous and promiscuous, and the key villain (John Simm's Master - villainous Time Lord, our hero's nemesis, etc) was a very 'now' maniac out of a zeitgeisty psychopath chiller-thriller. I bet I wasn't the only viewer who longed for more than five minutes of Derek Jacobi's ruthlessly controlled version.

I'm also minded to think that even the idea of the Doctor as 'role model' is extremely modern and really took root in the Tennant years. For large chunks of his existence he's been a cantankerous contrarian git, but it took the later Tennant episodes to make the Doctor literally messianic (remember him hovering, arms outstretched, rejuvenated by a world saying his name?).

In the Steven Moffat era, we have had the most 'alien' Doctor since the revival ... a Tardis crew with a genuinely different dynamic (Doctor as gooseberry - keeping the Davies kitchen-sink drama without placing the Doctor at the centre) ... and in River Song, one of the strongest characters the show has ever had. With the casting of Peter Capaldi, it would seem he has addressed another criticism of recent Doctors - they've been too young - and again the relationship between Time Lord and companion will need to shift into something different.

Moffat gets a lot of flak, much like - well, almost anyone that's ever been in charge of the show ever. I have some sympathy, not specifically with him, but with Who supremos in general. Cast an older Doctor, and people ask why he's still white and male. Would a white woman have been fine? Should she have been young or old? Would a man still have been ok if old and non-white? I can see the appeal of just leaving things as they are. At least you're then offending everyone equally.

But I - yes, I - am not the man to be so easily bowed. Moffat will have to move on eventually, which means I can then take over. I have at least two ideas to sort this out, hopefully to everyone's satisfaction.

1) The 'Slightly Nerdy' Solution. Who geeks may remember that due to some archaic bit of scripting, there is apparently a rule preventing Time Lords from being immortal - they're allowed twelve regenerations. This means that Capaldi is the penultimate Doctor (and we may already know who the 13th incarnation is, too, I suppose). In all likelihood, they will just pretend this rather inconvenient continuity niggle didn't exist - it wouldn't be a problem, although ignoring it might irritate a few old-school fans.

The show tackled the problem head on in the Tom Baker (Fourth Doctor!) story 'The Keeper of Traken', where the Master reached the end of his regenerations, and simply re-booted himself by taking over someone's body. Admittedly, that was an act of, well, murder, so the Doctor is unlikely to follow suit - but it would clearly be easy enough to plot around the problem if they choose to.

At that point, I would make the switch. Something really out of left-field would have to happen for the Doctor to launch into a completely new life-cycle so do it then. Find a way that works (Doctor has to merge with a Time Lady? Parallel universe where genders are reversed?). Move Moffat and Doctor 13 on. Bring in a female showrunner, a female Doctor, and some female writers and really go for it.

2) The 'Even Better But A Bit Pricey' Solution. Why did Davies get loads of spin-offs and Moffat none? I can only assume: budget. However, let's find some cash down the back of the sofa for a series NOW featuring a Time Lady. We can still have our female showrunner and writers, because Moffat has got the original series and 'Sherlock' to look after. He's got to let this go. Leave it, Moffat. This series could be about:


I would genuinely prefer to see any of these options over turning the Doctor into a woman - as though that would suddenly make everything ok. It won't. She would eventually regenerate back into a man. She would struggle to establish a distinct identity from the male versions. We're going to do this, so let's do it properly.

First footnote - You'll notice I ended up focusing on changing the Doctor's sex over, say, his race, age or orientation. Well, an older Doctor has now been cast. Equally (since all regeneration seems to be is some kind of cell renewal), it seems to me they could cast a non-white actor at any time and there would almost be no need for comment. The Doctor is always the outsider, so it will take a more aware and knowledgeable cultural commentator than me to identify whether the show can - or should - offer any comment on race issues. But changing the Doctor's sex goes further and deserves, I think, a reinvention of the format.

Second footnote - I am sure that out of my regular readers (thank you, darlings, thank you) who like this show, at least 100% of you may well disagree with at least 100% of what I've said. Fortunately - despite the disproportionate passions Who seems to inflame in people - it remains just a TV programme. This means, by definition, that all of our views are valid, that it's worthwhile exchanging those views, and that all of us can remain friends throughout.