Back in Spring, I wrote excitedly about how one of my favourite bands, Bitter Ruin, had launched a campaign on Kickstarter to raise the funds for recording their new album. In a brilliant turn of events, they hit their target in a single day. (Re-live that epic experience here, thrill-seekers!)

As one who pledged, I have a very nice edition of the album (and some splendid extras) to look forward to. But one particularly attractive feature of the campaign is how BR's Georgia and Ben have kept us backers involved throughout the process. Going beyond just Kickstarter updates, they've supplied us with news snippets and photos covering the planning, recording, gigging - basically a fascinating (and to their credit, pretty much relentless) diary of a band who have gamely opted to produce their most important record yet under the scrutiny of their fans. 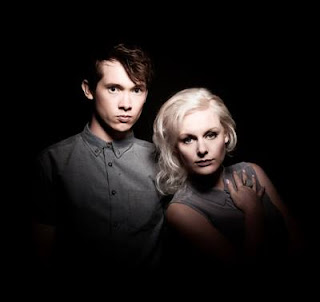 Now - it's done, and a track called 'Diggers' is available AS I TYPE.

If you do happen to remember (or go back to) my previous descriptions of what BR do, you might call to mind how, playing live, there is this totally involving sense of theatre and melodrama about how they put the songs across. In the best possible way, they are immersive, exhausting and cathartic. One of the most extraordinary things about 'Diggers', then, is its tension and control. A genuinely eerie work, it's singular enough to completely ensnare new listeners but also give us relative veterans - who possibly thought we knew our way around the band - cause to think again and picture a whole new sonic area for BR to explore. Georgia holds all that energy back (if your heart doesn't flip over at the restrained, descending vocal line around 2.10 then you are MADE OF STONE), while Ben's repeated mantra - (lyric: "I've been waiting for you") - only emphasises how time stretches out when waiting's all you can do.

I have a fondness for hypnotic songs that don't quite resolve but instead leave you in suspense, haunted - and as a result, with the compulsion to play it again - just in case it sorts itself out next time. My personal pantheon of these tracks includes Elvis Costello's 'Beyond Belief' or Peter Gabriel's 'Mercy Street' - records made by experienced, established talents who were bending certain rules they'd helped establish. 'Diggers' stands shoulder to shoulder with the best of these - but from a young band with life-affirming reserves of talent and ambition.

It's only been out for a few days, but I can't go more than a few hours without playing it. (And for a while there, it was every few minutes.) Here is the video, and you can buy the track here on BR's Bandcamp page.


The album itself isn't officially out until next year (so you can guarantee I'll be raving about it on the blog then). However - roll up, roll up - there is a chance to buy it early, at the band's two launch shows. The London one is coming up very soon - 7 September - and you can get tickets here. (I'll be there, and it'll be fantastic to see you.) Not sure if I have any readers in Dublin, but just in case - your gig is on 27 September and you need to get a move on, it's nearly sold out. Ticket link is here.

I know I've spent approximately a paragraph sounding like a virtual street team - but that's how it works. I want as many people to hear this band as possible. If you're looking for a band who demand - and deserve - your devotion: this is where to start.
Posted by Adrian at 16:11