For those of you who just think I've been spending all my free time at the Proms, well ... you're pretty much right. If you dip into this blog frequently (thank you, darlings, thank you) you may remember that I recently wrote about hearing the whole of Wagner's Ring cycle in a single week. Since that heady, surreal experience, my doggedly loyal Proms attendance has continued, but on a slightly more relaxed basis.

Primarily, this is because Mrs Specs is involved, and in 99% of occasions that means - we're getting seats. Bizarrely, as I wedge my ample centre of gravity into one of the Royal Albert Hall's compact receptacles, I do find myself gazing idly and almost wistfully up at the gallery. I can still pick out the exact bay - that is, the particular arch above the rail around the upper edge of the Hall - where David (classical music guru) and I watched most of the Ring operas, easy to spot thanks to the array of lighting that was above our heads and the nostalgic, evocative sign of the Gents over by the nearly wall. 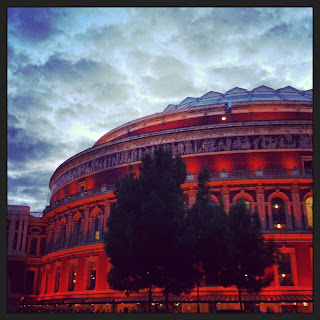 Now installed in our circle seats (possibly never to free ourselves), we have been privileged to hear just one sublime performance after another. To avoid forgetting anything, I am going to employ a Bulleted List:

This music is almost beyond review - I can only rhapsodise about being lost in glorious surround-sound, immersing myself in divine melody as performed by orchestras, choirs and soloists operating at something like peak performance. (Although after one piece, David - punctuating the rapturous reception with masterful timing, as ever - muttered, "Problems with the horns, I think". He didn't elaborate. There was no need. This is why I insist on applause every time he, like an orchestral Fonz, enters a blog post.) The two choral concerts in particular were literally restorative, as they were performed in the late-night Prom slot, almost lulling the audience into a kind of heavenly waking slumber. Perhaps fearful of everyone getting too relaxed, they seem to arrange a brief Radio 3 interview in the middle of the late-nighters to perk everyone up. The chats are always informative and entertaining - but it's also very endearing that they all seem to begin with a kind of thigh-slapping "Bach is GREAT, isn't he?" / "Do you know what, HE IS!" exchange, just to make sure every last drooping eyelid is hoisted.

What this run of concerts has particularly got me thinking about is what it's like to see classical music. Again - going back to the Ring - although they weren't staged, you had soloists acting parts, so it seemed perfectly natural to watch, not just listen. So even though I wasn't following an opera plot on these occasions, I found myself really staring hard at the performers - and, unsurprisingly, the conductors in particular. I hadn't really appreciated the visual aspect of a classical gig before.

John Eliot Gardiner marshals the forces of the Monterverdi Choir and English Baroque Soloists (his own troupes, so there are already formidable levels of rapport and mutual respect) without even needing to use a baton. His arms almost seem to become totally curved, describing flowing lines in the air, so that he seems to ease the music out of the players and singers. He has gone on record as saying how Bach's music feels engineered to make listeners want to dance - and he enacts this on the podium, always on the move. I wonder if the choir and orchestra know they're on the right track when they produce this reaction in Sir John - that even while he's in control, they take their lead from the effect the sound they're producing is having on him. It's remarkable to see that exchange actually happening.

And Marin Alsop is a force of nature. She's already making headlines as the first woman to conduct the Last Night of the Proms at the end of this season. We can't go to that, so we were quite curious and excited to get to see her now - and we weren't disappointed. I haven't seen anyone - male or female - combine such high-octane levels of authority and abandon. To start with, Alsop didn't use a score for the entirety of the evening. An impressive feat of memory in itself, this also meant there was nothing physically between her and the players. She seemed to fizz with energy, covering every inch of the podium and almost launching herself towards whichever section of the orchestra she was conducting. While the concert was inevitably dominated by the expressive Brahms pieces, I was particularly impressed with the performance of the Schumann. (The two composers are linked - an up-and-coming Brahms met Schumann and championed his music thereafter.) I'd not previously encountered the piece, which seems to get more captivating as it goes along. In the later movements, Alsop drew an almost jazzy zip and lightness of touch from the Orchestra of the Age of Enlightenment, which made me itch to hear the work again as soon as possible. (For reference, it's dangerous to let me near the Amazon app on the way home from a Prom...)

I'll reserve the final word, though, for another extraordinary performer - the Japanese pianist Mitsuko Uchida, the soloist for the 4th Beethoven Piano Concerto. The three of us watched her play in a state of near-hypnosis. (David happened not to be free for this gig, but we had asked along a colleague of mine, Ellie, who I have discovered is equally immersed in classical music lore - to the point where she nailed the composer of the encore before we found out what it was. I fear when David and Ellie meet, there will be some kind of 'music stand-off' where we get to gleefully test their knowledge offering only Pimms and ice-cream as prizes.)

Uchida is so remarkable to watch, I think, because she seems somehow sustained by the sound of the orchestra. I always expect soloists to almost wrap themselves around their instrument, clinging to it for succour, but not so here. When Uchida isn't actually playing, she sits back - folds her arms or hugs herself, basically relaxing her body (even though mentally, I'm sure she must be totally 'on') and listening. She moves to the music, makes eye contact with the players and conductor and is quite happy as certain movements end to give herself over to cries of joy and even in one memorable instance, punch the air kung-fu style in the conductor's direction. So assured is she that, feeling the heat during the first movement, she flings off her ornate jacket and lays it on the piano stool, just in time to resume playing in her sleeveless t-shirt. Literally, one of the coolest virtuosos I've ever been privileged to see. (And hear.)