Something a little bit out of the ordinary to report on this time. I want to tell you about a play I saw a few nights ago - not my usual gig/exhibition 'comfort zone', so I'm exercising some slightly different writing muscles. Still - I had the best possible reason to be there. Full disclosure: the writer is a friend of mine, Sadaf, and this was her first play. 'Beyond Shame' had been accepted for a read-through performance as part of the Angelic Tales festival at Theatre Royal Stratford East.

The festival is designed to showcase new writers, and stages more or less a play per night for a week. The company behind the initiative, Team Angelica, choose the winning submissions, and start by mentoring the writers - Sadaf was keen to point out how helpful TA's John Gordon was in helping her develop the script. They then spend 1-2 days rehearsing each one until they're 'match-ready' to go before a live audience. To me, Sadaf was already a winner - to be one of the five selected (when the team received 75+ submissions) is a fantastic achievement.

I'd not been to a theatre evening quite like this one before. Because both Team Angelica and the Theatre Royal are heavily involved in the community/education side of drama, we had a great warm-up from the show's director, who primed us to think about certain elements of the play in readiness for a short discussion afterwards. He invited Sadaf up on stage to discuss the title of the play. I liked this inclusiveness - as if we, the audience, were somehow a natural extension of the whole workshop environment. Could something we thought or said spark a reaction, revision - or a brand new idea, even - in the writer's mind? 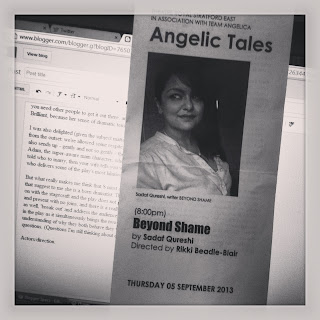 When the lights went down, I experienced the same tingle of anticipation I get at a gig where I've heard the band's records but not seen them live. I already knew that S had a way with words (from hard-hitting non-fiction to some genuinely lovely 'stop-you-mid-scroll' lyrical tweets) but this was a PLAY - a whole universe conjured up in her mind, from scratch. And the focus really is on the writing - the staging is minimal and the cast hold the scripts - and what it produces in your imagination.

At the risk of embarrassing S (oh, what the hell - I'LL TAKE THAT RISK), I can honestly report that I was completely blown away. To give a brief plot outline: a teenager has taken his life, and it's established in the very early scenes that we're observing his funeral - along with his ghost, who provides a commentary on events and on occasion - at moments of frustration or high emotion - addresses the attendees directly. They of course do not see or hear him. In flashback, we find out the events and experiences that drive him to suicide.

I want to include as few spoilers as possible - since the play will almost certainly be developed further and performed again - but Sadaf tackles head-on a perfect storm of issues, and not just the ones that make the headlines. Abuse and intolerance (racial and religious) are in the mix, but dovetailed into an equally searching examination of the pressures on adolescents to conform, and struggles with changes to mind and body when becoming an adult.

Sadaf explained in the Q&A that the piece started life as a short story, and I think turning it into a play was the first brave and brilliant decision (of many) she made about it. Brave, because once you're writing a play, you need other people to get it out there, and I love that sense of confidence and faith in the material. Brilliant, because her sense of dramatic tension and ear for dialogue are gifts to the actors.

I was also delighted (given the subject matter) simply by how funny the play is. Gallows humour is present from the outset: we're allowed some respite from the tension, then the chills become all the more powerful. S also sends up - gently and not so gently - the family and community with a superbly crafted pincer attack: Adam, the super-aware main character, who delivers some stinging lines ('you're told what to study, you're told who to marry, then your wife tells you what to eat') and Huma, the epically judgemental Imam's wife who delivers some of the play's most hilariously intolerant remarks without ever becoming a stereotype.

But what really makes me think that S must absolutely do more of this sort of thing, are some crucial signs that suggest to me she is a born dramatist. There is some serious sophistication - and experimentation - going on with the stagecraft and the play does not patronise you - you've got to keep up. We slip between past and present with no joins. One actor doubles up for two crucial roles, creating disarming parallels between them. And there is a really bold move towards the end where not only Adam but Huma as well, 'break out' and address the audience directly. This section includes, I think, some of the best writing in the piece as it simultaneously brings the two most 'opposed' characters closer together, fills out your understanding of why they both behave they way they do and clarifies some of the play's most searching questions. (Questions I'm still thinking about days later.)

Cap doffed, too, to the cast and direction. All the players were superb - they made it easy for us to forget they were reading and I stopped noticing the scripts very early on. Particular mention should go to Hormuzd Todiwala as Adam - a tour-de-force of a part where the actor has to convince as a small kid, stroppy teen, and inhibited, defeated young adult - and Sajeela Kershi as Huma, for keeping her monster all too human. The director, Rikki Beadle-Blair, had nothing but praise for the writing, but mentioned his constant aim to keep the pace up, to do justice to an already tight script. He did a brilliant job, because everything about the production seemed vital and secure - no evidence of nerves or awkward pauses, and not a single actor 'dropped the ball' at any time.

Reflecting afterwards, I realised that the best and most accurate compliment I can pay Sadaf and her production is that I would never have believed it was a debut. The structure - complex but clear, and very precise - it was completely a play and you could not achieve quite the same effects with it in another format. And the dialogue - totally natural, brilliantly varied, satirical and heartfelt. Just keep writing, S, and don't stop.

* * *
You can find out more about the excellent work Rikki Beadle-Blair and Team Angelica do at their website here. And you should definitely consider giving S a follow on Twitter - especially since you'll want to know when her next play is ready!