An audience. (With Nicola Benedetti.)

While hanging around dangerously near the Royal Albert Hall box office during the Proms, I spontaneously purchased tickets for Nicola Benedetti's recital, which took place last night.

The performance itself was charming throughout and in places spectacular. Nicola B's latest CD is part-classical, part film music (I've hesitated to buy it, to be honest), so the programme reflected that, too: we heard the 'Schindler's List' theme, and something from 'Ladies in Lavender' (no idea) but I felt this sort of thing was comprehensively knocked for six by a dazzling Saint-Saens rondo, for example. A generous performer, NB included some ensemble pieces which allowed some fellow musicians - some of whom, including her sister, she had played with for some years - to shine. So, we heard a lovely early Mahler quartet, and best of all, the entire second half was given over to Tchaikovsky's Piano Trio, written in memory of Nikolai Rubenstein. This work (Opus 50, for fans of, er, Opus numbers) was new to me, and I was totally hooked from about a minute in. Sombre, certainly, but always with a memorable hook or burst of jaw-dropping frenzied activity (as NB described it, talking through the piece beforehand, 'we're all scrubbing away!') around the corner, to catch you by surprise and keep you immersed.

Well, keep me immersed, at any rate. And Mrs Specs. I'm not sure I can speak for anyone else.

The Hall was packed. And yet I've never known an audience quite like it. It's as if they didn't really know why they were there. As regular readers of this blog (thank you, darlings, thank you) could attest, I've been to gigs of all types, shapes and sizes and I still wasn't quite prepared for the sheer randomness of this crowd.

Might need to make something clear at the outset - I am absolutely NOT an elitist, snobbish type who only wants cobwebbed experts at classical concerts. (I'm no expert myself, although I may possess a few cobwebs.) For example, people who get annoyed when folk don't know when pieces start or finish. I am NOT one of those. If someone accidentally claps between movements of a symphony or concerto, I am totally fine with that. You haven't ruined my night. In fact, good on you, applause-wielder, for coming along and getting into it. It'll be you and yours who turn up again and again, and keep love for the music going.

In fact, I am being ultra-inclusive, by not making excuses for people. I expect them to treat the music they've come to hear or investigate with respect and attention, whether it's their first concert or their thousandth. You won't catch me saying, 'Oh well, you've only come to three of these so far - of COURSE you'll be wanting to behave like an arse.'

Because that's what happened. Lack of politeness and consideration, on a kind of 'hive mind' scale. I did not expect to see or hear, for example:


Also - the coughing. I know people always moan about this. What surprises me is that it got so bad during this concert that it became obvious: no-one with the slightest inclination to cough tried to stifle or tackle it. They coughed during the quietest moments. They coughed at the exact point between the music fading into silence and the applause starting. During the Mahler, I really felt like we were hearing a quintet with the audience as fifth member, on lungs. No-one attempted a gentle clearing of the throat. It was as if we were sitting in the middle of a raging TB epidemic. I've heard of 'mass consumption', but this is ridiculous, etc. Ho ho ho ho. *HACK*

Famed jazz egghead Keith Jarrett (and I LOVE him) has become notorious for railing at, er, 'ejaculating' audiences, accusing them of coughing through lack of attention span - that is, you're not transfixed enough so you don't try and suppress coughs, fidgeting etc. I still - just about - think this is a bit graceless and off-beam. First: if the audience really ARE bored (and they aren't), then arguably it's KJ's problem and responsibility. Second: it's a slightly awkward stance with KJ in particular, because he wails like a banshee when he plays. "Hey! You in the crowd! Shut your noise up!" *sits at piano* "Wurrrrrgh! Hnnnnnnng! Gnnnarrrgh!"

But I'm now starting to think that KJ has tapped into something that really could be true. Not that we might be too dull to engage with the music. More that some people now go to concerts with the point of view that the evening is in fact, really about them, and not the artist. Why should they behave differently out than they do at home? Why should they not do exactly what they want to, even if does affect others' experience?

Context is everything. My fellow gig-goers at, say, Camden Underworld do this sort of thing all the time (ok, perhaps not polishing the bald heads of their companions to a shiny glow, there's a mirrorball for that), but it's a standing venue, the music is always loud, etc etc. So you move about, and you chat. But extreme metal fans are often fantastically polite - the outlet for their pent-up energy is the noise itself. The rest of the time, enormous Vikings who are so hard they have tattoos on their piercings and essentially give the appearance they could snap me like a twig, in fact spend gigs buying each other drinks, taking quite a lot of care of each other, checking they're not in everyone else's way and basically behaving with twenty times the bonhomie and goodwill we witnessed at the Albert Hall.

And talking of the Albert Hall, I also gloomily realised that I had been spoilt by being part of so many Proms audiences - lauded by performers as among the most attentive, and silent, crowds worldwide. I hope Nicola B and pals were so 'in the moment' - and their performances would suggest so - they weren't affected by one of the least interested and aggressively selfish crowds of all time. Everyone stopped clapping as soon as possible, by the way, and headed off. Whatever encore they had prepared, we threw away. 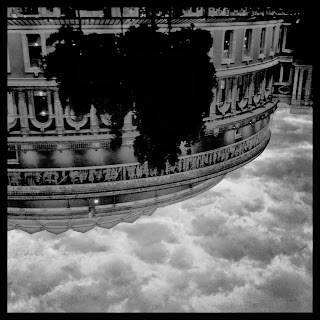