Came back - reluctantly - from our hols in Northumberland at the weekend. One of our very favourite parts of the world, and it was still the most gloriously relaxing and recharging of fortnights, despite the weather being a little 'brusque' at times. (We weren't a million miles from Morpeth, one of the flooded areas that made it onto TV, but comfortably far enough, thank heavens.)

I hope to blog at some point about the amazing walks, castles, coasts and the like (this will depend on when I get my photos sorted, I suspect) but perhaps inevitably, I've ended up bursting to tell you about something 'arty'.

We used one of the wetter days to head into Newcastle. First we headed to the still-shiny arts complex the Sage for breakfast. (Its cafe affords such a glorious sausage sandwich, I think in honour the whole  venue should be renamed either the Sausage - or for grammar-hostile typographical larks, the SauSage - or for arched-eyebrow obliqueness, perhaps the Sage & Onion - BUT I DIGRESS.) 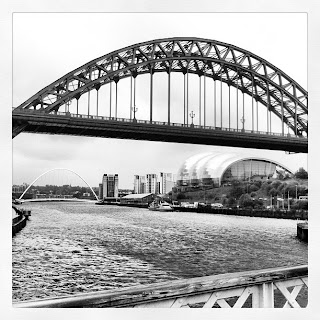 A short hop along the bank of the Tyne is the BALTIC contemporary art gallery. (In the photo you can see in the middle distance the new footbridge. The building on the immediate right is BALTIC. The cocoon-style building on the near right is the Sage.) A poor - but easy - comparison in London might be Tate Modern, in that BALTIC also resides in a beautifully re-purposed industrial shell, but BALTIC is a bit younger in both feel and actual age, and - with only temporary exhibitions - seems to be moving faster.

We were going there to satisfy our curiosity about a piece of sound art. Obviously, there are certain areas of 'sound art' - like records and concerts - that I have been immersed in for decades. But audio installations - noise made for the gallery rather than the gig - have mostly eluded me, despite studying the pages near the back of Wire magazine with a furrowed yet curious brow.

The installation is by Janet Cardiff. It's called 'The Forty Part Motet', and at face value, is simply a playback of the late 16th-century choral work 'Spem in alium' by Thomas Tallis. The motet itself is unceasingly spectacular. It requires 40 voices (in eight groups of five) and the piece passes between the mini-choirs, building up then ebbing away, with all 40 singers coming together at a few key points during proceedings for maximum impact. It's an incredible achievement already, before some Modern Art Person got their hands on it. What gives, etc?

Cardiff's idea feels like one of those notions that is now obvious, but only because someone has conveniently already thought of it. When you walk into the gallery, all you see is a minimalist hi-fi enthusiast's nirvana - a totally blank white room, with forty speakers in a big circle. Except it isn't quite a circle - if you looked down from above, it would be an octagon, with each of its eight sides a line of five speakers. Each speaker plays back one voice. If you manage to enter the room at the right time (we did - yay!) you hear the choir chatting to each other before starting to sing. Nothing quite prepares you for when they do.

This really is surround sound. The music travels from in front of you to behind you, or seems to glide around the circle as if music really could be passed like a gift from one person to another. Some people stay fixed to the middle of the circle, or as near as they can get; others are constantly on the move. Most of us did a bit of both. At one point, I parked myself by a silent quintet and waited for my chosen choir to get their turn; the sudden rush of sound physically moved me and I shuffled into the centre to recover.

(A brief point just to say how astounding I think the technical achievement is, too. My hearing might not be perfect after God knows how many noisy gigs and pairs of mega-bass headphones, but I could hear more or less no bleed between the speakers. Each one really did seem to broadcast just one singer.)

Cardiff describes how people in a choir all hear their own unique mix of any piece they sing, and that she tried with this work to give that experience to the audience. If anything, she has enhanced this idea, because we're not rooted to the spot, and we can 'sample' different positions during the motet just by wandering about the circle. I started thinking even at the time - with Tallis's notes washing around my ears - that everyone has a unique reaction to any bit of art. You look at a painting or sculpture, and the person next to you sees their own individual version of what you see. But Cardiff has created something which is absolutely different for everyone at the point of experience. No-one can replicate the version of this I heard.

There are infinite ways to stand, to move, to listen.

(We arrived towards the end of the run, and the installation is only at BALTIC for a few more days, to 14 October. If you ever get the chance to see/hear this, in Newcastle or anywhere else, please go. I've reproduced the photo from the BALTIC site here so you can see what it was like. The image is copyrighted to Colin Davison - brilliant picture. Link to the full site here.)