Last week was quite 'busy' - one of those times where I booked a whole variety of things months apart, checking my diary one date at a time, only to find that I was OUT THREE EVENINGS IN A ROW. This is big news for an old fart like me. What ragged shadow of a man would I be come day 4?

Luckily, all three events involved a nice sit-down. In strictly chronological order, Wednesday came first, with a trip to see the Tallis Scholars at Cadogan Hall as part of its 2012/13 choral season. They were performing a programme of Fayrfax and, er, Tallis. The hook of the programme was that the Fayrfax piece, 'Missa tecum principium', is rarely heard live in its entirety. Surprisingly, they had decided to break it up into its separate parts, and 'interrupt' them with parts of Tallis's 'Lamentations'. Reading this in the programme before the concert began, I thought this was going to be odd - as if the group had put themselves on 'shuffle'. Afterwards, though, I think I got the reason why.

It's rare that I go to any choral concert and come away thinking the experience anything less than beautiful. I love that kind of music, and obviously with choirs and ensembles you don't have quite the same risk of the soundman forgetting the keyboards are there or the bass player coming on pissed. But but but - however lovely the Fayrfax was, the difference in quality between that and the Tallis was audible. Actual music critics could do a better job than me here (er, obviously) but I would broadly say that the Fayrfax seemed a little aimless in comparison. Tallis has power, movement, and harmonies to simultaneously lift and chill. Whereas the Fayrfax was 'pretty'. Pleasant. Perfectly enjoyable but somehow thinner, lower on substance. I could understand how hearing all the parts of the 'Missa' consecutively could give us all some kind of gossamer overload without the mighty Tallis stepping in to shore the whole thing up. So - a triumph of programming and a concert full of delightful moments - but you could equally argue that the whole Fayrfax piece is rarely heard for a reason.

And I object to the frankly attention-seeking spelling of the surname 'Fayrfax' as well. I can do without that kind of mucking about.

Inevitably, Thursday came next - when I went with a colleague of mine to see Dara O Briain. I probably shouldn't say too much about this, because otherwise I'll just end up keying in a bunch of his jokes. Not a good idea (especially if you might catch the tour or get the DVD). Add in the fact that I'm not really a comedy expert - some people treat it like I do music, going to loads of gigs and hearing a wealth of talent on the circuit that simply doesn't crop up on 'Mock the Week' or 'QI'. In comparison, O Briain is obviously at the 'aircraft hangar' level of TV shows piling on top of arena gigs on top of TV shows, and so on.

As a result, maybe it's fitting that he now seems to be some kind of comedy Springsteen - bounding on stage just after 8pm, he basically waved us off at about 10.30pm (with just a 20 minute break in the middle - and even then he was Googling stuff to use in gags revolving around particular audience members). Hardest working man in the ho-ho-ho-business.

I knew what to expect from his other DVDs, and the 'Craic Dealer' tour doesn't really deviate from the pattern. He feeds off a few hapless souls in the front one or two rows to improvise a section of the show - and the prepared material ranges across technology, media, and history. O Briain wears his knowledge very lightly and he sees the irony in how large a gap there is between what we think we know, and what we actually know. While it would be impossible for him to pretend he's an idiot, he still reserves some of his sharpest barbs for himself as he pulls the rug from under some of his assumptions about his own intelligence and celebrity. Determined as I am not to reveal any of his gags, I will simply say this in recommendation: I left the Hammersmith Apollo with eyes still watering, hoarse with the after effects of gasping laughter.

With a now total lack of surprise, Friday followed on, and this - I have to say - was the week's main event for me. Dead Can Dance's only UK date of this tour, at the Royal Albert Hall. I had waited around 15 years for this gig. DCD have been one of my favourite bands for years, but I finally booked tickets to see them on the tour following their 1996 album 'Spiritchaser'. Immediately, and no doubt just to spite me, they cancelled the gig and promptly split up. Then, when their reunion shows came round in 2005, I couldn't go to those gigs either. I really thought I'd never EVER see them.

Suddenly, out of nowhere - and no doubt just to cheer me up - they reformed AGAIN. This time it was for a new album and tour. (This picture is from the London show, from DCD's own Facebook page - Brendan Perry - er, left - and Lisa Gerrard.) 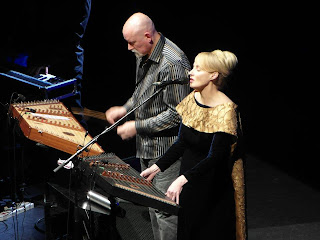 Dead Can Dance are perhaps a classic example of the 'creative marriage', with all the telepathic sympathy and understanding - and simmering tensions and differences - that implies. They began as a romantic couple but the band in its first life still outlasted the relationship. Each time operations ceased, the break was apparently due to an almighty barney. They do seem to embody the cliche, though, that whatever bond they share, it's still unbreakably solid, and clearly demands that they eventually come back to collaborate again.

Part of the difficulty, though, must lie in the fact that they are poles apart creatively. This is band that stays together due to 'musical differences'. For those of you unfamiliar with DCD, they are often lumped in with goth or post-punk due to their very early tracks (and being on 4AD can only have encouraged that) but within an album or two they were incorporating world and early music into their sound until they arrived in some kind of separate genre that no-one really thought existed. And within their own rather wide remit (Medieval dances? Check! Scott Walker-style ballads? Yep! Persian laments? Natch) ... they began to move further adrift from each other. A relatively early record, 'Within the Realm of a Dying Sun', had them taking charge of a side each. (The arrival of CD must've presented a problem. Another fight, no doubt... 'I want the side with the music on!' etc..)

To simplify to a ridiculous extent, Lisa is the dramatic one - a voice of operatic range and quality but with a kind of sensual control that's all her own - she is the avant-garde improviser, and absorber of exotic 'world rhythms'. Brendan is more song-orientated and has a rich boom of a voice well-suited to hypnotic, nagging ballads. When they work together, though, Lisa's material gets Brendaned, and vice versa, each lifting the other's material. One of the crucial joys of all the DCD albums - including the terrific new one, 'Anastasis' - is coming across the scattered moments when they sing together, exact compass points where their two directions meet.

If their Facebook page is anything to go by, they are having a whale of a time on tour. And that seemed to be borne out on stage. Gerrard is without doubt a 'diva' - but in the best sense, positively regal, utterly serene, looking spectacular and at every moment she isn't actually singing, she smiles affectionately and delightedly at the audience (who are showing their love back by, in general, going bananas). Even better, she blows kisses towards the end, which is exactly the kind of thing you want from someone you don't know but you're nuts about. Perry is not as demonstrative, but the admiring looks he gives Gerrard when she's in full flight, and the smiles they exchange every now and then suggest that at least on this particular evening they weren't flinging hammered dulcimers at each other before the opening number.

As the sound reverberated around the hall, every song felt like being enveloped in a warm glow. The band - all keyboards or percussion - were modest but propulsive, driving each hypnotic number along without eclipsing the two stars. I was fully aware that even as they struck up my favourite DCD song ('Rakim') I couldn't quite believe I was really seeing them live at last. An enterprising soul has already put the track on YouTube, so please have a listen for yourself (below). It contains at least two heart-melting moments for me - three and a half minutes or so in, when Gerrard starts the chant, and then the point a little later when Perry sings the outro over it. An absolutely unforgettable evening.