Last night, Mrs Specs and I went to the cinema to see Led Zeppelin. Some of you may be aware that, in typical 'lumbering behemoth' style, Team Zep have finally got round to releasing a live album and concert film of the legendary reunion gig they played at the O2 in 2007. (The event was arranged as a tribute to Ahmet Ertegun, founder of Atlantic Records - but inevitably, 99.99% of the focus was on the headliners.)

The CD and DVD, both called 'Celebration Day', are out in November, but advance screenings of the film have been lined up at various local picture houses, including one just down the road from us. So, faster than you could say, 'Ooooh yeeeahh mama, ain't no denyin' etc', I booked tickets. Stairway to Heaven (or Row K, to be more precise), pictured below. 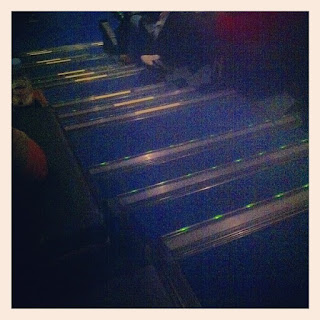 In many ways, the film is a masterclass in simplicity. There's no build-up or epilogue, no pesky bits of documentary inserts, no backstage interview or even candid out-takes. Once your eyes adjust to the screen, there appears to be ancient footage of the band playing back, suspended in darkness; then you realise that this is an intro visual projected on-stage at the O2. Then - bang! - they're on.

Much was made at the time of how the band seemed to treat this a bit like a club gig. The O2 stage is roughly the size of the universe (ish) but they stick very close to each other, gathering supportively in front of the drum kit and beaming with encouragement at Jason Bonham - son of their late drummer John and for one night only, taking his place. (Jason does a fine job - it's unlikely that any drummer alive could emulate Bonham Snr's power, but the new JB has clearly been playing these parts all his life. He nails the precision and technicality, and sits happily high in the mix. Any potential 'he's not his dad'-style carping can also be laid to rest just by seeing, close up, the teary excitement in his eyes - who could begrudge him this experience? Especially when he's obviously so bloody good.) When they're not grinning in Jason's direction, they're darting smiles and knowing glances at each other, obviously having a fantastic time. What's easy to notice now, of course, is how well this whole approach lends itself to the film, with many shots able to contain at least three of them at once and make sure we are voyeurs when they make eye contact.

The 'mature' Led Zeppelin are, collectively, an extraordinary sight. I used to wonder why old concert clips of Jimmy Page showed a man literally soaked from head to toe in sweat. Now I know. He began the concert in a shirt, waistcoat and long overcoat. Someone could've taken him to one side and said, 'You know, you probably won't need all those layers, Jimmy. The heating's on, and everything.'

Also, Page has the most dizzying repertoire of variations on the 'guitar face' that I have ever encountered. (I did wonder if this experience would prove as traumatic as seeing the Rolling Stones 'Shine a Light' concert film at IMAX, where every on-screen wrinkle was the size of the Grand Canyon. Fortunately not.) But for each wailing note of each solo, each razor-sharp turn in every riff, Page would also pull a gurn of such complexity, I thought he might be half-man, half-camel. There were times when it looked like his face, by itself, had entered zero-gravity.

Amusing though this was, the music nerd in me did have time to be taken aback by Page's playing. One of the pleasures, for me, of Zeppelin's records is their excess - dense with overdubs, a thick stew of a sound. Here, though, you can only hear one guitar line and it's fine. Does the job. No gaps. Page clearly isn't playing 'everything', but he's worked out how to suggest that he is. Spellbinding, even if there's the very real fear that he'll perspire onto something electrical and short himself out.

By contrast, Robert Plant may have been bitten by a radioactive lion in his youth, but here he is lean and unruffled, prowling the stage, throwing a few well-timed shapes and most importantly, giving a terrific vocal performance. Again, he can't do what his younger self did on the records. In fact, his younger self couldn't always do it (for example, they speeded up the vocals on the original 'Song Remains the Same'). But he's now a performer of such vast experience that he simply, subtly changed the pitch or melody where appropriate without ever undermining or departing too far from the fabric of the song.

If Plant is calm and imperious, John Paul Jones - the band's quiet genius - sticks mainly to two facial expressions (delight and concentration) and just gets on with proving why he was and is so essential to the group. How can there be such a talented bassist - whose funky and catchy parts provide a kind of liquid surface for Page to lurch all over - who can then get behind a keyboard and play so well that you forget the fact that for those numbers, there's no bass at all?

The set list was clever. Most of the big tunes, but not quite all (wasn't expecting 'When the Levee Breaks' - apparently that's impossible to play - but missed 'Heartbreaker') ... at least one monumental surprise ('In My Time of Dying'!!) and a song they never played live at all first time round ('For Your Life'). As a result, everyone was thrilled and pleased.

Well, I say everyone. One of the weirdest things about this whole experience was the audience. No surprise that they were quite easy to spot (instead of looking for our screen number on the ticket, we could just follow the chaps with the long grey hair). But once in there, everyone was on 'gig' rather than 'film' behaviour. People clapped between songs - quite nice, actually. Less nice was the near-ruckus in the corner where one bloke asked another to stop talking, only to be met with a torrent of intimidating abuse at top volume. Add to that the well-refreshed woman a few rows down 'singing along' tunelessly at every opportunity, waving her arms around, and on a couple of occasions, standing up to dance, much to the chagrin of the poor sod behind her. Fortunately, she was accompanied, so her sheepish other half could pull her back down into her seat before she caused another scrap. And a few seats along from her, someone was filming bits of the, er, filmed gig on the screen. What's the matter with these people?! It's coming out on DVD in a few weeks! For a few, maudlin minutes, I felt that everyone in my town was an idiot. Out of 200 or so people, who'd all gone to the trouble of tracking down a local Led Zep screening, we had, say, 10 people - an unacceptably high percentage - who felt that they were so important that it didn't matter if their way of enjoying themselves spoilt things for others. That said, I soon got over it. I was watching an almighty film. I focused on the screen, and the music, and tuned the miscreants out.

Should Zeppelin have ridden the wave of interest generated by this gig and toured? No. I think it was Plant who ruled it out (I might have done myself if I'd been on the point of touring with Alison Krauss) but with the blessing of hindsight, he had his head screwed on. This was perfect. Any more would have diluted the triumph and amplified the disappointment. It is sad in some ways that Page seems to be rather trapped by the band's legacy, whereas Plant in particular has just got stuck into new projects and collaborated widely. (This seems to happen sometimes when a band collapses - the 'musical' one is stranded without the frontman/woman ... whereas the muse in question goes off to a spectacularly varied solo career. In my generation, I think this might be the case with Marr/Morrissey post-Smiths as well... Discuss!)

But 'Celebration Day' must be the kind of absolute pinnacle that any great band would want to leave as their epitaph. See it on a big screen if you can... but I confess - I'm already looking forward to another viewing on the laptop with headphones. I can always get Mrs Specs to start yelling or wave her arms around in the middle distance if I feel like recreating the cinema experience.
Posted by Adrian at 15:53