Last Two Nights of the Proms

A week or so late, but at last I'm managing to write up my 'report' on the Big Finale, which for Mrs Specs and I, was spread across two nights. The Last Night of the Proms was, as usual, on the Saturday - but we had been unable to resist the Prom on the Friday night before.

In some ways, the Penultimate Night of the Proms was very modestly programmed but performed by giants: the mighty Vienna Philharmonic (conducted by Bernard Haitink) tackling two pieces, one each side of the interval. Haydn's 'London' Symphony, then Richard 'not the waltz bloke' Strauss's Alpine Symphony.

I hadn't heard the Haydn before. It was his last symphony - only his 104th, the slacker - but it's hard to imagine a less valedictory work. Possibly because he spent the 14 years remaining to him on other, perhaps weightier stuff - oratarios and masses, it would appear, but with a light sprinkling of chamber music to cleanse the palate.

It's tempting - if no doubt massively simplistic, but hey! that's my habitat - to think that he might have given up on the symphonies simply because he knew this one was perfection. It sounds 'easy', because it is lovely. That's not to say it is light, or minor - rather that it is not aiming to challenge or provoke. It wants to make you smile. Admittedly, there is a bit of 'Adagio' at the start, but it's not long before Haydn goes 'Ha! Got you there!' and ups the pace to a happily melodic dance pace, reaching its zenith in the Minuet & Trio. A half-hour of pure pleasure.

The Alpine Symphony - WARNING, NOVICES! Not even a symphony! - is in fact a 'tone-poem', in other words, the music throughout is specifically designed to evoke something real-world or visual. Now - I love everything I've ever heard by R Strauss, so I'm not really impartial here. If you like the soprano voice, seek out his 'Four Last Songs' - you will melt like an ice lolly, in a furnace, dangling inside a volcano, on the sun. Or the famous theme from 2001 - that's RS as well ('Also Sprach Zarathustra').

The Alpine Symphony lasts a full 50 mins with no pauses for breath, although Strauss itemised the individual sections of the piece carefully. It depicts a day in the mountains and glacier from sunrise to sundown, and even 'tells a story' of a tricky expedition where the climbers reach a summit then leg it down as a storm kicks off. The whole thing is tremendously captivating and exciting, but trust me - if you get the chance to see an orchestra 'do a storm', take it. The percussion guys at the back were larging it with actual SHEET METAL in their arsenal for some proper thunder and lightning action. It's always refreshing to see classical players behaving with the same in-your-face gusto that you'd expect at other types of gig. Life-affirming.

(And they went down a, er, storm, too - so much so that the whole orchestra encored, with a piece by Johann 'yes! the waltz guy!' Strauss. Slightly odd but very delicate after the Alpine tour de force. Haitink is adored by the Proms crowd - a delicate figure himself now, but all the energy clearly goes into the conducting.)

So - to the Last Night itself. I think there's actually a bit less to say about this, partly because if you're interested in the Proms at all, you probably know what the last half-hour is always like. We bought into it completely. We had flags. We had a HAT. Okay, there were two of us, so one hat was obviously a bit limited in scope, but Mrs Specs made up for it with antennae with crowns on. 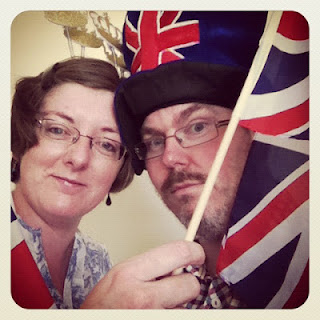 And there were really three of us, because our classical music guru David was also there (a few rows along) and his total, all-consuming love of the occasion was infectious. (David loves the Proms so much, I think he feels the same way about Proms the way I do about food - except that David would go to more than three square Proms a day if he could.) We wondered if the climax of the concert would 'get to us' emotionally - would we tear up at 'Jerusalem', or the anthem? Answer: no, because the main atmosphere at the Last Night is 'Huge Party'. Everyone is just larking about. With an eye on bar profits, I can only assume, the Hall opens a good 1.5 hours before the start time (for other Proms, it's much closer to 45 minutes) so a large percentage of the attendees are 'adequately refreshed' and, in a good way, it shows.

Which makes the rest of the concert all the more interesting. It's clearly programmed for gnat-like attention spans, and that's not a criticism. This Prom has its sights on revellers and casual TV viewers, and if you don't like one thing, something else will be along in a minute. It's like one of those 'Only Classical Album You Will Ever Need' compilations, except that it's live, and rather excitingly off-piste. Yes, we had evergreens 'Nessun Dorma' and Bruch's first Violin Concerto (and both 'stars' of the night, tenor Joseph Calleja and violinist Nicola Benedetti were brilliant value) - but I was also treated to unfamiliar (to me) Shostakovich, Massenet and Dvorak. In particular, there was a charming duet between violin and voice by Leoncavallo, called 'Mattinata'.


And the whole evening kicked off with a brand new work by Mark Simpson called 'sparks', seemingly included just for its Mrs-Specs-scaring qualities (although I rather enjoyed it).

This is an occasion so utterly steeped in tradition that you could easily imagine it wading through a quagmire of Empire-era pea-soup-thick treacle. This year in particular, some of our successful Olympians made a cameo-appearance to an understandably wild reception. But the Last Night also succeeds in the rather less predictable aim of sneaking some relatively unusual spice in with the sugar. It definitely moved me. But for two-thirds of the running time, it jangled my brain more than my heart. 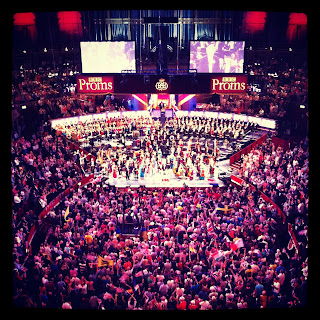