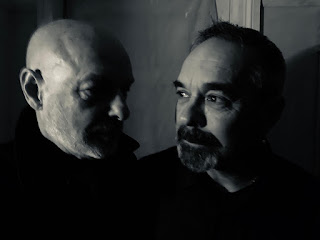 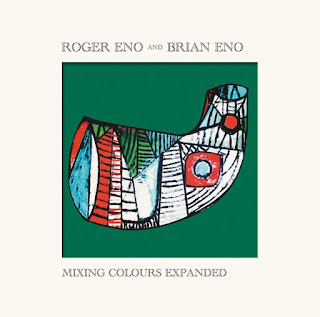 Brian Eno must surely occupy a unique Brian Eno-shaped niche in the arts world: early member and creative catalyst of Roxy Music, pioneer of ‘ambient’ music, revered record producer, accomplished harmony singer – but also writer, lecturer, philosopher and professional ‘ideas man’. The most concise phrase available is perhaps ‘sonic boffin’, and who wouldn’t want that on their business card? While Roger Eno is a prolific pianist and composer, regularly releasing solo projects and collaborations, often bringing a warm, lush sensibility to the ‘ambient’ genre. (One might recall the brothers’ collaboration with Daniel Lanois on the 1983 ‘Apollo’ album – originally written to soundtrack the moon landings documentary ‘For All Mankind’ – which in parts is like bathing in an all-enveloping surround-sound.)
‘Mixing Colours’ is an interesting contrast to ‘Apollo’; it feels so sparse in comparison. There are still points in this music that make Einaudi sound like Iron Maiden. But ‘sparse’ is not the same as empty. It’s both a minimalist and maximalist work: by paring down the arrangements to almost the least activity necessary to make an actual noise, the production gives the music a huge sense of scale and open-endedness. It reminded me of how Brian’s involvement in producing rock bands could somehow both rein in any ‘clatter’ in their sound and, in the process, give them the stature to take on stadiums. It’s the space created inside the music, and ‘Mixing Colours’ is unafraid to push the dimensions of this space to its outer limits.
There are a number of approaches used through the album that all serve to enhance this effect. The clearest signpost for this is a particular recurring figure, found in the opening track, ‘Spring Frost’, then in ‘Verdigris’ and the penultimate track, ‘Cerulean Blue’ – each time slightly different in tone but fully worked through.
In the track ‘Snow’, however, Roger’s piano melody is etched out so carefully, that you may find your brain supplying notes that you don’t actually hear. Brian creates a bed of background noise which is pitched perfectly in sync with the piano, but gradually, almost imperceptibly, increases in volume until it fills the interior room. The track ‘Desert Sand’ acts like an opposite number, as this time the keening, atonal synths create dissonance, peeling off the piano line so, like the shifting sand suggested by its title, the integrity of the track is undermined and knocked off-balance. ‘Iris’, on the other hand, has the fracturing in the piano line, until, in its final minute, the synths offer support this time and track its changes.
Because the record is so concerned with atmosphere, its moments of melodic power often land when the piano is left untreated. The track used as the lead ‘single’ from the album, ‘Celeste’, is a perfect example. The keyboard is processed so that nothing sounds quite natural. As you can hear, any forward movement is repeatedly undercut as it slows to a stop, over and over, the build-up in tension based on the bank of additional sounds swirling around the tune. Then, at the exact two-minute mark, a low note on acoustic piano resonates, as the higher notes seem to approach a resolution. About fifteen to twenty seconds later, we hear the brothers’ alchemy at its most magical, as Roger finds one of the most unforgettable hooks on the whole album, while Brian allows the untreated piano to gradually emerge and lend the melody increasing heft. The pattern then cycles round again, with increased confidence.
Motifs found in tracks like ‘Snow’ and ‘Celeste’ recur here and there, so that when your ear picks up on particular elements, you can appreciate the ways they are reflected and adapted. ‘Blonde’, ‘Dark Sienna’ and ‘Vermilion’ establish the refrain upfront on acoustic piano before it morphs from Roger to Brian mode, repeated and enhanced electronically over the rest of the track. More than once, you’ll encounter crucial bass notes dropped like depth charges – say, in ‘Ultramarine’, or ‘Moss’.
The use of sustain, echo and chime gives much of the record a spiritual feel – the ghosts in the machines overcoming any suggestion of automation or inhumanity. ‘Cinnabar’ explicitly evokes the peal of bells, and likewise the stately church organ of ‘Obisidian’. ‘Wintergreen’ offers yet another angle, as the notes, cascading into each other, seem to process towards the listener as they are multitracked and filled out.
Some of the most fascinating tracks for me include a shimmer effect that functions as a mood-changer. This would include the exotica of ‘Quicksilver’, the abstraction of ‘Marble’ and an absolute standout selection for me: ‘Deep Saffron’, where the agitation turns into a near-pulse, creating a kind of absent rhythm track – you could almost sense this one forming the basis of a chill-out techno mix, especially when – surprise? – a cavernous bass note makes a cameo appearance.
It’s all building to the magnificent final track, ‘Slow Movement: Sand’, which manages to echo everything that’s gone before in a stately five minutes: the background wash, resonant bass, layered synths, all grounded by Roger’s piano, left unvarnished. It brings home how appropriate the ‘colours’ concept is for the music, with the album drawn from an overall palette, and features of each individual shade creating new, potentially infinite variations.
A record like this gives the lie to any notion that ‘ambient’ music need be featureless or unstructured. In ideal conditions (dark room, headphones), ‘Mixing Colours’ is a handsome, near-definitive statement of beauty in subtlety, and a lesson in collaboration where the artists know exactly when to hold back, and understand what makes their creative partners shine.
Photograph by Bee Eno and Mary Evers
Posted by Adrian at 13:25