Yes, surprises: Rick Simpson, 'Everything All of the Time: Kid A Revisited'

This album is an extraordinary achievement – certainly no ordinary ‘covers project’. Rick Simpson and his ensemble wilfully tackle head-on perhaps the original writers’ most elusive set of tracks and, fittingly, bring the same sense of adventure to the material as Radiohead might recognise from recording much of their music first time around.

It’s impossible to approach a record like this – a song-for-song interpretation of Radiohead’s fourth album ‘Kid A’, released in celebration of its 20th anniversary – without mentally rewinding to one’s experience of the parent LP. Hindsight, and a handsome sequence of Radiohead albums since, help to give ‘Kid A’ a clear place in the scheme of things. But it remains an impressively strange album – not necessarily in its sound (it wears its electronica / modern composition influences on its sleeve like a fluorescent armband), but more in its approach and attitude. 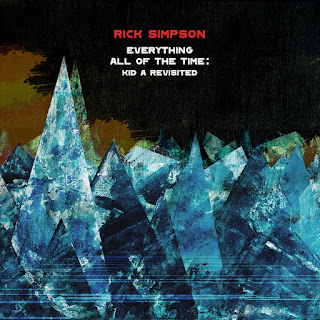 In fact, Radiohead had taken great strides with every record, from a slightly muddy debut album, to the scarily assured follow-up ‘The Bends’, to the expansive, precision-prog of critical and commercial smash ‘OK Computer’. This time, however, the steps leading up to the next giant leap were tense and tentative. Reading back about how the band came to create ‘Kid A’, it feels as though they had a kind of collective ‘freeze’ in their ability to function; a sort of slow-building Y2K problem personified by five blokes in a studio.

And even though the album is its own kind of masterpiece, I think its traumatic origins are audible, in its grooves. I find it amazing still that they had enough material for two albums – yet the follow-up with the leftovers, ‘Amnesiac’, has the lion’s share of unshakeable melodies. And since then, they have constantly shifted this way and that, carving out their unique niche between the anthemic and the avant-garde. Think how many Radiohead songs (whether earlier – ‘Planet Telex’, ‘Lucky’, ‘The Bends’, ‘Karma Police’ – or later – ‘Burn the Witch’, ‘Supercollider’, ‘House of Cards’, ‘You and Whose Army?’, ‘There There’), whatever sense of angst or danger they carry, still have sections, even particular moments, that take you to a point of euphoria and release. But there in the middle, ‘Kid A’ is curiously bereft of those moments. It’s taken a crack team of jazz musicians to draw them out.

Radiohead are widely covered, not least in jazz – perhaps because they have such a distinctive musical stamp, especially in Thom Yorke’s unmistakeable vocals. I can imagine artists seeing a clear way through to making a Radiohead track their own, especially as an instrumental. I’d also speculate that as many of their tracks embrace sophistication (unusual time signatures, song structures) without being over-complex or messy, they must provide appealing starting points for improvisation.

But as bandleader and arranger, Simpson has set himself the unenviable challenge of re-working an entire Radiohead album: not only must each individual track go under the microscope – but can also he preserve the sense of unity and coherence over the whole set? Yes, it turns out.

Simpson himself is on piano, and he would be the first to acknowledge the contributions of his band: Tori Freestone and James Allsop on saxophones, Dave Whitford on bass and Will Glaser on drums. After performing this set together live, they recorded these album versions in one afternoon. As a result, they replace the original’s introverted hesitancy with a sense of excitement and drive: Yorke’s cut-up, repetitive lyrics from the original, that seemed to rein the ‘Kid A’ songs in, hold them back somehow – are, of course, now gone, and the tracks gain a renewed sense of purpose and forward motion. 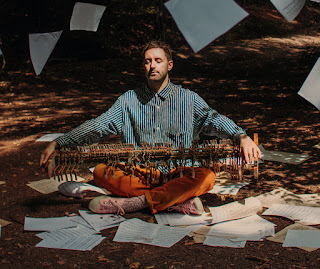 This doesn’t mean any of the sensitivity is lost: far from it. ‘Treefingers’ is a virtually ambient instrumental on the original, a kind of looped chord sample that periodically renews itself. Simpson has percussion – rumbling toms and echoing cymbals – build the ambient ‘wash’, as delicately sustained piano dissolves into runs and trills before re-charging with a new chord, calling to mind the ‘release valve’ feel of the Radiohead version. Likewise the closing tune, ‘Motion Picture Soundtrack’, is barely there on ‘Kid A’, smothered in effects: Simpson exposes the beautiful melody using piano and saxophone, but then offsets it with a surround of percussion and second sax, honouring the original’s impulse to hide.

But if the aim of jazz is to surprise the listener, this group are on top of the brief. Anyone familiar with the title track of ‘Kid A’, its coiled riff perhaps the closest a song can sound to someone curling up into the foetal position, will be thrilled at how the band take its bare bones off in myriad different directions but preserve its stop-start restlessness and closing ‘mash-up’ of elements.

On the other hand, ‘The National Anthem’ – the Radiohead album’s most explicit nod to jazz – is skilfully harnessed into something more controlled and incisive. The insistent bassline is present and correct, but otherwise the track is turned inside out. The frontline horns providing the rhythms and, in a bravura individual performance, Simpson’s piano not only captures the throwaway vocal melody but leads the way in creating, solo, the sonic mayhem generated by an entire jazz group in the original. (Fortunately, everyone joins him by the end, so we’re not cheated of the track’s chaotic climax.)

For those tracks where ‘Kid A’ is at its most ‘song-like’, the ensemble waste no time in getting under the bonnet and re-tooling them in their own image. ‘Optimistic’ lives up to its title as the band take flight over a kind of demented samba-on-speed rhythm. ‘Idioteque’ hits a punch-the-air moment at around two-and-a-half minutes where the duelling saxophones are suddenly de-railed by the piano and bass imitating the keening vocal line (perhaps this is also one of Simpson’s favourite points, as the sung lyric here is “everything all of the time”).‘How to Disappear Completely’ is perhaps the most direct ‘cover’ here, using sax and piano to give us a loyal take on the original’s voice and guitar. But the restraint allows Freestone – here providing pared-down ‘swoon’ on violin – and Glaser to truly shine. (Listen out, too, for Glaser’s extraordinarily measured opening solo on ‘Morning Bell’.) It demonstrates how Simpson’s band mesh so well together that they can use their instruments to create a sense of ‘noise’ amid the melodies (a role played by glitchy samples and electronics on ‘Kid A’ itself).

To end at the beginning, one track that I think gloriously sums up the whole enterprise is ‘Everything in its Right Place’. It’s a modest start, over a minute shorter than the Radiohead version. It treats the original with respect, the haunting hook and progression in place, but in no time at all every band member has made their mark on it, Simpson finding endless melodic avenues around the pattern, Freestone and Allsop working in telepathic tandem to briefly bend and shape the tune in Simpson’s wake, while Whitford and Glaser awaken the beat into buoyant, unpredictable life.

Like the whole album, it brings the claustrophobic, insular world out into the light. It takes something electronic, trapped in its own machinery, and lets it breathe acoustically, on real instruments. It takes music borne of difficulty, intensity and uncertainty, and replays it with spontaneous, natural exuberance.

Rick Simpson’s ‘Everything All of the Time: Kid A Revisited’ is available to order now on vinyl, CD and download from the artist’s Bandcamp page: https://rick-simpson.bandcamp.com/album/everything-all-of-the-time-kid-a-revisited