That slightly panicky feeling again... that I'm seeing and hearing things I want to write about faster than I can actually write about them. So much to share, so little time. However, I went to two concerts recently that I definitely want to enthuse about before they recede too far in my memory - and it gives me another excuse to recommend the relevant albums by the artist concerned. (Regular readers - thank you, darlings, thank you - might recall as they read on that I included both of these artists' most recent recordings in my best of 2018 round-up.)

Back in January, I went to see Heather Leigh at London's Café Oto. I only discovered HL's music relatively recently, when I read in a magazine about her performing in a duo with avant-garde jazz saxophonist Peter Brötzmann. As Leigh's instrument is the pedal steel guitar, my interest was immediately piqued at the unusual combination. The music they make together (that I've heard) is both demanding and rewarding, untethered, full of contrast with the seemingly infinite soundscape of the strings with the sax's agitation.

So it was a natural next step to investigate HL's solo music. As luck would have it, I went straight to her latest release from last October, 'Throne'. I was surprised and overjoyed to fall this hard for an album that I might so easily have never come across, that could have slipped through the net and been lost to me for good. 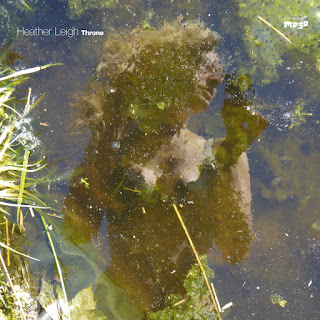 'Throne' is a remarkable statement of intent. It's one of those records where the cliché "it's unlike anything you've ever heard" is probably, for many listeners, in fact true: every reference point I reach for seems somehow inadequate. What you get: six songs, one of which is a brilliantly sustained 17-minute epic. They are measured, stately, almost all the instrumentation coming from Leigh's endlessly inventive manipulation of the pedal steel (and more pedals besides). The arrangements almost seem to suspend time: beats are minimal, and rather than straight melody or rhythm, the sound is as much an environment, a kind of gossamer sheen for HL's vocals to drift through. The voice is a wonder in its own right: richly sensual with a close-miked, confident intimacy to it. There is definitely an eroticism to this music - it's bold, uncompromising, and I want to say powerfully feminine - by which I mean, it has a take-no-prisoners frankness and the songs build and shape entirely on their own unconventional terms... but there is no aggression or self-aggrandisement either - the atmosphere is all-consuming, welcoming even, drawing you in rather than pushing you away.

Why detail the record so much when I'm supposed to be writing about the concert? Chiefly due to Leigh's decision to tour the album by performing the whole thing live, as a complete suite. Café Oto is in fact a terrific venue for intense music like this: it's small, and soon packed, with the audience and stage virtually tumbling into each other - it makes you commit, you're part of the experience - but it never feels too claustrophobic because it has windows and door out into the street. Even though HL, seated at the pedal steel, is inevitably static to some extent, her charisma fills the venue as much as the sound. With only laptop-brandishing John Hannon providing additional effects, she brings the soundworld of 'Throne' alive with deft hand and foot movements, head close to the mike, measured vocals inviting us to hear her confession. It's sometimes hard to reconcile the power and occasional fury of what we hear with her serenity and coolness, so lightly is her dexterity worn. There's no pause or applause between the songs, partly because she doesn't break character or mood, sustaining a thrum or pulse to link one tune to the next, and partly because fans of the album, soon aware of what she's doing, gladly surrender themselves to listening to the entire record in the most electrically alive circumstances.

One of my favourite tracks on the album, 'Soft Seasons', has a particularly scorching riff which seems to rupture the drift of the preceding songs - and I can only say that experiencing this hook kick in live was like a release, a moment of true euphoria in a sequence of expertly paced songs that simmered and smouldered in our Oto-shaped universe.

You must hear Heather Leigh in concert if you can, but in the meantime, you can buy 'Throne' directly from the artist here.

A few weeks later, in mid-February, I went to a recital at the October Gallery (also in London) by pianist Rebeca Omordia - prompted by really enjoying her 2018 CD 'Ekele'. RO is half-Nigerian, half-Romanian, and 'Ekele' features solo piano music by three Nigerian composers, aiming to bring them to a wider audience. It's a superb listen - a real ear-opener because it genuinely sounds (especially to an 'untutored' listener like me) like several different genres or even traditions of music wrapped up in one style. It is, in part, 'classical' music as a Western listener might strive to classify it; but the bold, syncopated rhythms - particularly in the bottom end - just as readily call to mind jazz, or what we somewhat inadequately call 'world music'. 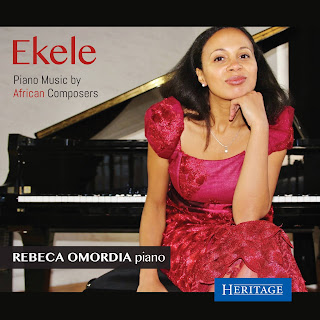 Watching the virtuosic Omordia play these pieces live was exhilarating, as at times it simply seemed like her hands were being operated by two different bodies, different brains. As the right hand soared, airborne, dancing across the keys with the lightest of touches, the left hand dug into the earth, rooted in thorny, twisting bass lines. Jaw-dropping; foot-tapping. My favourite composer from both the CD and the concert was Ayo Bankolé, who created a striking piano sonata based around a narrative of the passion of Christ, by turns tense, hymnal, tragic and gentle.

Elsewhere, more miniature masterpieces abounded, not only from Bankolé, but also some of the brilliant '24 Studies in African Rhythms' by Fred Onovwerosuke: most well under 2 minutes but needing no longer to bottle that sense of 'classical-fusion' that made the entire recital so exciting and fascinating in equal measure.

I was pleased to see that 'Ekele' the gig opened out to feature other composers not on the record... which makes me wonder if at least one further volume could be in the offing...? I do hope so. As surprise treats, RO played 'Toccata' by Romanian composer Paul Constantinescu, then Ravel's 'Scarbo' (renowned as one of the most tricky piano solos ever written) - not only stunning showpieces but also a properly unified part of an evening that rejoiced overall in dazzling ability and rhythmic complexity.