The timing for archiving this post is deliberate. This was a review I wrote for Frances about an intriguing performance of Schubert's 'Winterreise' we saw during the summer - in the writing, it expanded a little to include some thoughts about the piece itself. In my next post, I'm planning to cover a very different rendition of this masterpiece, so it felt right to place this here as a companion.

Schubert’s song cycle – surely the greatest work of its kind – sets to music a series of 24 poems by Wilhelm Müller. In the opening lines, the protagonist begins an unspecified journey on foot, leaving behind a woman who, back in the Spring, he believed he would marry. But now the affair is over. By the second song, we find out her parents have made a better match.

In the bitter, freezing night, he strives to leave the town behind him. But his route is obscure, as he encounters familiar landmarks, signposts, a village, even the post van – and most of all, throughout, he feels the effects of nature: snow, wind, water, clouds, lightning. Towards the end of the cycle, the sense that this voyage is at least partly interior strengthens. Hallucinations get the better of him: an apparently friendly guiding light, multiple suns – all symbols for what he has lost). Finally, he meets a mysterious ‘organ-grinder’, and considers joining him, to sing and play together. There are a number of interpretations of the ending out there: the one I favour – and I think I’ve come across the most – is that the figure indicates the cycle is eternal. The hurdy-gurdy goes round and round for ever, and the grinder could even be the wanderer’s future self. Or, he could, simply, be Death.

Schubert composed the first 12 songs in the cycle in early 1827, before he even knew about the rest of the poems in the sequence. The story of his friends’ utter bewilderment on hearing them is often told in programme notes and CD booklets, so I won’t repeat it in detail here. But with all these years’ hindsight, it seems to me that ‘Winterreise’ must have sent shivers down their spines because Schubert wrote exactly the music the words demanded. There are tantalising flashes of vigour, even joy – and brilliantly robust, yet fractured piano parts that mirror so well a voice wracked with both determination and despondency – but the overall mood is poignant, downbeat and unresolved.

‘Winterreise’ might be cold to the touch, but it’s difficult to escape its icy grip. Speaking as an avid listener, I seem to gather recordings of it in an almost addictive way, constantly searching for new angles and insights.

Singers are drawn to it like moths to a blue flame. Perhaps it’s the art song equivalent of a Hamlet, or Lear – a rite of passage. Many feel the urge to visit and re-visit it. Ian Bostridge has a famously close relationship with the cycle, writing a book about it, and recently performing a semi-staged, orchestrated version against projected footage of this younger self. Mark Padmore and Florian Boesch have each recorded it twice in the last ten years (with different accompanists).

And that’s just a few of the men. However, the protagonist of ‘Winterreise’ – definitely a chap – must be an irresistible ‘trouser role’…? (It’s easy to forget that song is as visual a medium as opera – writing before recorded music was dreamt of, Schubert could only ever have imagined someone standing up, putting these songs across to a live audience.) But even though there are numerous recordings – including Brigitte Fassbaender, Christa Ludwig, Nathalie Stutzmann or one of my personal favourites, Alice Coote’s searing live disc – the opportunity to hear a woman perform ‘Winterreise’ live still feels all too rare. 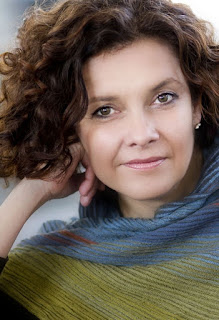 Tonight, we were in Temple Church to hear mezzo-soprano Angelika Kirchschlager’s interpretation, for the first time. I’ve always found AK’s performances of art song thrilling: as much acted as sung, and with a captivating emotional range. I was excited to hear how she would apply this over a continuous narrative, rather than stand-alone lieder. What I experienced was completely fearless, at times frustrating but always fascinating.

The venue was both friend and foe. In Temple Church, at least where my companions and I were sitting, there’s a gloriously resonant but quite echoey acoustic. I’m not a sonic scientist, but at times, it felt like the voice and piano clashed slightly because a rumble of bass notes would tumble all over each other, or a phrase would be lost (for example, in the helter-skelter ‘Rückblick’ / ‘A backward glance’). At other points, however, in slower songs like ‘Wasserflut’ / ‘Flood’ or ‘Irrlicht’ / ‘Will-o’-the-wisp’, a fantastic sustain effect was created, allowing AK and JD to continue singing and playing with the traces of the previous note or two still fading. This really enhanced the continuous feel of the performance and lent a sinister edge that would be hard to replicate in a studio recording.

AK’s commitment to the piece was total, and I believe she portrayed the cyclic structure of the story as much through her body language as her voice. In the opening ‘Gute Nacht’ / ‘Good night’, she was still, transfixed, even to the point where I thought she was warming up in some way, not quite in full flow yet. Almost immediately, though, she opened out and began to move. Only in the final song, ‘Der Leiermann’ / ‘The organ-grinder’, when she withdrew back into herself, adopting the same pose, staring at some phantom far beyond the audience, did I realise – thoroughly moved and disquieted – that at the start we had seen her protagonist emerge, and now disappear.

Unafraid to sound harsh or broken when the context demanded, AK could come across at times as if the acting were leading the singing. So effective was she in the cycle’s moodswings that the intensity felt a bit like listening to a 75-minute ‘Erlkönig’, a rollercoaster ghost-train ride that kept me riveted. But this didn’t prevent the emotional high-points of the sequence – in particular, the soaring anguish of the penultimate song ‘Die Nebensonnen’ / ‘Phantom suns’, AK’s bright, glorious tone so tragically affecting – hitting home with a devastating beauty.
Posted by Adrian at 14:14