In 2015, when Carolyn Sampson first joined forces with Joseph Middleton for the recital disc ‘Fleurs’, it was more or less her first venture into art song. Up to that point, many people would have associated her most closely with the earlier end of the repertoire, her crystalline voice gracing Bach, Dowland, Handel, Lully, Monteverdi, Purcell and others besides. But that overlooks her occasional forays into more modern eras: discs of Esenvalds and Poulenc, say, or Tavener at the Proms. One senses it was only a matter of time before song came calling.

Joseph Middleton is surely one of the finest and most well-regarded accompanists working today. He is currently Director of the Leeds Lieder festival, and he received the 2016 Young Artist Award from the Royal Philharmonic Society, whose jury described him as ‘a born collaborator’. As well as a superb sound – more of which later – he has a real flair for interesting, inventive programming that gives so many of his recordings an album-like unity.

‘Fleurs’, an album of English, French and German songs all with a floral theme, was an absolute revelation to me. First, there was the opportunity to hear the purity of CS’s tone inhabit such intimate and intense settings, then to appreciate JM’s ability to honour the different composers’ styles while maintaining a consistent ‘feel’ across the whole disc.

The pair obviously clicked, as – seemingly on a mission – they have been fast assembling a distinctive, irresistible body of work. The two subsequent CDs, ‘A Verlaine Songbook’ (theme – Verlaine’s words set by a variety of composers) and ‘Lost is my Quiet’, featuring countertenor Iestyn Davies alongside CS in a programme of lovestruck duets, have been equally captivating. Now for number four, and in all honesty, it’s probably their most sublime achievement yet. 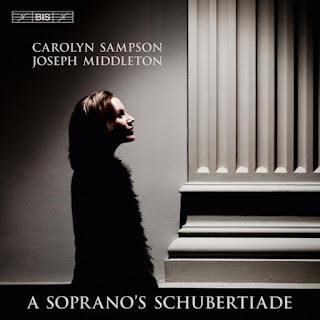 Full disclosure: Schubert is my favourite composer, and ever since I heard CS and JM were planning an all-Schubert disc, I’ve been more or less ticking off the days to release one-by-one on the calendar. At the same time, would my expectations be unreasonably high? Could this possibly be as good as I hoped it would be? Here’s why I think it is.

While this disc is their first dedicated to one composer, the duo have still pushed the programming aspect further, to find their own way into such a vast catalogue of lieder. As the title of the album suggests, the tracks chosen focus on Schubert’s ability to compose such powerful, deeply-felt songs for and about women.

As a result, the album includes some of the indelible ‘greatest hits’ you might expect – but CS and JM have kept the integrity of any suites they belong to: for example, ‘Gretchen Am Spinnrade’ comes with the Britten completion of ‘Gretchens Bitte’, and ‘Der König in Thule’; while the famous ‘Ave Maria’ is the third in the sequence of ‘Ellen’ songs, all included here. The disc’s generous running time also features all four ‘Mignon’ and both ‘Suleika’ lieder.

‘Suleika I’ opens the programme, and is as good an example as any to illustrate the telepathic connection the duo seem to share. The early part of the song demands that JM play with great tenderness, but at great speed, as the accompaniment shimmers beneath lyrics speaking of burning heat cooled by the stirring wind. CS, taking full advantage of one of Schubert’s loveliest vocal melodies, shapes her tone and timbre to be part confessional, part conversational. The power and excitement rise – the dynamics of the piano and voice in perfect sync – then subside into the steadier sensuality of the closing, repeated verse. It’s the first five or minutes, containing an album’s worth of delights.

Two of the ‘stand-alone’ songs are also particular stand-outs for me. Like the ‘Suleika’ songs (words by Marianne von Willemer), the lyric used for ‘Romanze’ was also written by a woman, Wilhelmina Christiane von Chézy. Perhaps understandably, this draws out an exquisitely tender rendition from CS. As the voice sighs its way towards the end of each verse, JM subtly increases the volume of the left hand, as if the bass could buoy the singer up. The very last ‘Herz’ is as heartbreaking as the final line describes.

This is followed by ‘Blondel zu Marien’, which starts as almost a steady, stately serenade. However, as each of the two verses progress, they build to a complex sequence dominated by a spine-tingling downward cascade of notes, punctuated by trills and decorations that demonstrate exactly why CS’s combination of vocal beauty and agility make her such a natural communicator in art song.

I could enthuse like this about every track on the disc, from the tragic dignity of ‘So last mich scheinen’ (the third Mignon song) to that Everest of lieder, the 13-minute ‘Viola’, where both navigate the changes in mood as if a single unit.

But perhaps it’s wise to finish on ‘Gretchen am Spinnrade’, an extraordinary song by any standards, but famously composed when Schubert was only seventeen. The piano represents Gretchen’s spinning wheel, and by extension, her (in)ability to focus on operating it as she is distracted by thoughts of Faust, the man she loves. As a result, the accompaniment endlessly orbits around itself – apart from one key moment – while the voice rings out above it, ranging from hesitancy to unchecked passion. It’s hard to imagine a song where it’s more vital for the two performers to track each other with such precision, while conveying such extremes of emotion.

CS and JM absolutely nail it. As in the very best performances of this song I’ve heard, the pace only starts with exact regularity, until the movement begins to shift constantly with Gretchen’s concentration. JM audibly changes the way he ‘leans’ on the keys, spikier here, lengthier there, as if to capture the changing pressure on the wheel. CS is utterly in character and expertly paces the build-up to the astonishing ‘breakdown’ near the end of the song when the wheel stops altogether. After the climactic “sein Kuss!” she takes a breath, and then another, her Gretchen clearly reeling before gathering herself and sending the wheel spinning again.

Moments like this not only help elevate the disc from being brilliant to something of an instant classic – they also prompt me to mention the fantastic production by Jens Braun, recording at Suffolk’s Potton Hall. All four of the Sampson/Middleton CDs were made in the same conditions, and the space within the sound really helps you to feel like you’re in the room as private audience – especially if you use a decent pair of headphones.

This is the kind of album I could talk about until you physically stopped me; I can imagine pressing copies into the hands of friends. It’s everything I could have hoped for, and more.