Class act: 'Lessons in Love and Violence' at the Royal Opera House

The 2012 opera 'Written on Skin' is a modern phenomenon. Already widely produced, with the Royal Opera House reviving it a mere four years after its first run there, its place in the repertoire seems assured. And no wonder: it's such a striking, original work - I feel sure that its stature will only grow further as the years pass.

'Written on Skin' was composed by George Benjamin, with words by Martin Crimp. (Crimp describes his contribution as 'text for music', rather than a libretto.) Although they had worked together before, it was their first full-length opera. Quite a debut.

Now, their new collaboration, 'Lessons in Love and Violence', is in its premiere run at Covent Garden. I could not have been more excited about seeing this, than if you'd wired me up to an excitement machine and turned it up to 'maximum excitement'. At the same time, I realised that I was a little concerned - how do you follow up something so well-received? Reproduce it, almost? Or 'reject' it and go to another extreme? A halfway-house?

In the end, I needn't have worried: I think their solution is clever, intriguing and masterful.

The source story is essentially the tale of Edward II - possibly most familiar as depicted in Christopher Marlowe's play (although I won't forget certain parts of Derek Jarman's film adaptation in a hurry). In Crimp's treatment, a number of key characters remain the same, but King and kingdom are unnamed, and the action is pared down with scalpel-like precision.

While society seems on the brink of collapse through war and poverty, the King lavishes endless riches and attention on his favourite - and lover - Gaveston. Isabel, the Queen, appears at first to tolerate - if not relish - the situation. The army supremo Mortimer tries to make the King see sense, but Gaveston manages to provoke Mortimer into seeming disloyal. The King promptly banishes Mortimer, setting in motion a chain reaction of horrific events where no character escapes the consequences of their actions. 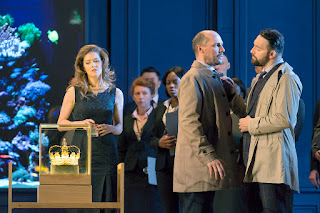 (The brilliant production photos are by Stephen Cummiskey, copyright ROH. Here is Barbara Hannigan as Isabel, Stéphane Degout as the King, and Gyula Orendt as Gaveston.)


The opera is so new, I'm actually reluctant to include specific 'spoilers'. If you don't know the story of old and resist reading the programme's synopsis beforehand, you'll reap the benefit in extra suspense.

The whole approach of 'Lessons', I think, is interesting in itself. The key creative team returns from the first production of 'Written on Skin': that is, as well as Benjamin and Crimp, we have the same director, Katie Mitchell, and set/costume designer, Vicki Mortimer. Covent Garden regulars will no doubt remember her 'split-screen' production of 'Lucia di Lammermoor' (with the stage divided in two, so you saw what the 'off-stage' characters were doing on one side, with the main events unfolding on the other). which along with 'Written on Skin' showed an interest in controlling and compartmentalising the vast space of the ROH stage. With 'Lessons' it's no different: this time, the space significantly reduced almost to a widescreen cinema screen size, emphasising the claustrophobic dead-ends the characters find themselves in. The compact staging also allows the main room, where we see most of the action play out, to 'move' between scenes, changing our view of what is - and isn't - 'on-screen'. You could also suggest that the casting of soprano Barbara Hannigan, who created the role of Agnès in 'WoS', is a further point of reference between the two - but more of that a bit later.

So.... why are we opera-goers (those of us in the UK / London, at any rate) being invited - dared, even - to deliberately compare 'Lessons' with 'WoS'? Is it meant to be a kind of sequel? Did 'getting the band back together' seem like a safe option? I think there's considerably more to it.

Obviously, I've no idea what they'll do next, but it seems to me there's a 'Benjamin and Crimp project'. I've always been drawn to authors, composers and artists that repeatedly explore ideas that matter to them in myriad different ways (off the top of my head: the novels of William Golding, the music of Philip Glass, the photographs of Andreas Gursky), and I wonder if we are seeing something similar develop here. It isn't just the themes they choose to explore - the relevance that distant, historical crimes can still have to our behaviour today; the turmoil of confused sexuality; the terrible, hereditary effects of abuse; what strength and weakness really are; what happens when the line separating life and art goes out of focus...

GB and MC also seem to be fashioning their own 'form' of opera. I think it's telling, in a genre that has traditionally venerated the composer over the librettist, that GB and MC are very much seen as a partnership. (I think - love 'em or loathe 'em - that you can see a similar relationship in recent years between John Adams and Peter Sellars, working towards a kind of impressionistic 'reportage' version of the genre that's entirely their own patch.) Benjamin's music and Crimp's words are so closely-linked that the score clings to the vocal lines like hands around a twisting rope, and the never-ending tense rumble of the orchestra (on terrific form) veers as much into sound design as any kind of conventional musical accompaniment. A brief example - as many of you will recall, often before going in to see a play or opera with some violence in it, you'll see a 'Warning! Act 1 contains a gunshot' sign, or similar, and sure enough, when the moment comes you get an almighty bang of a sound-effect. Although a gun is fired onstage in 'Lessons', the sound is made entirely within the orchestra itself. Elsewhere, as characters collapse or go off the rails, the score seems to 'break' along with them, like a coiled spring finally snapping. In another section, what I'll only refer to as the 'palm reading' music, for a matter of seconds, plays like a soundtrack might, forcing you into a state of terrible anticipation...

Voices in similar registers blend and clash - the intimacies of the male lovers are expressed by two baritones as King and Gaveston, while further sexual tension is generated between Isabel (soprano) and Mortimer (tenor) - so every duet feels very 'close', narrow and intense. At times, it feels there is barely any room to breathe.

Along with Mitchell, Benjamin and Crimp have created a universe of sorts, which is characterised by a sense of the detached supernatural - 'Wos' had its angels struggling to make sense of the protagonists' impulses, 'Lessons' gives Gaveston an enigmatic aura that moves from his ability to manipulate the King into something even more dangerous. Mitchell and Mortimer (Vicki, not army chap) use certain devices - characters slow their movements down to freeze time, clothes and one's state of dress/undress take on symbolic significance - that echo the earlier opera, without re-playing it.

I rate both operas so highly that I honestly couldn't express a preference - especially after only one 'listen' to the new one. But there are plenty of ways where 'Lessons' arguably takes a great leap forward in the execution. For sure, it doesn't have a figure to touch the heart in the way that Agnès did in 'WoS'. However - it has bent a 'bigger' source (the relatively well-known source material) to its purpose; it's more relentlessly paced; and its plot is more ruthlessly logical - instead of self-sacrifice, the characters unwittingly engineer their own fates.

I will be fascinated to see these operas - I hope - in ten or twenty years' time, when each has gone down its own path and we perhaps see wildly different productions of each, by different creative teams. I feel that 'Lessons' as we now have it can certainly stand by itself - at the same time, I think knowing 'WoS' inevitably adds a few extra layers to the experience that it doesn't necessarily need, but which resonate nonetheless. 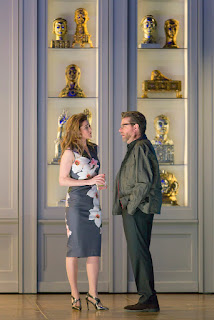 I should add that for the first run, Benjamin wrote each role specifically for this superlative cast. Everyone involved is a compelling actor as well as singer. If I had to pick stand-outs, it would probably be the three leads. As ever, Barbara Hannigan's astonishingly fleet, utterly driven vocal characterisation is complemented by how physically fearless she is - in Isabel, there's initially self-control, a surface-level femme fatale in chic outfits, never without a drink or a smoke... but the steady falling-apart on the inside is all there in the increasingly loose body language and brittle gestures. Peter Hoare (Mortimer) has been one of my favourite singers for some years. (For his performances in ENO's 'Jenufa', 'The Queen of Spades' and 'Thebans', I would personally offer him the keys to the city.) His ability to sound both passionate and sinister marks him out as a truly distinctive voice and dynamic stage presence. Stéphane Degout finds vulnerability and tenderness in the deeply-flawed King, without ever losing sight of the steel the character must once have possessed.

There are a few performances left if you act quickly, with tickets still available for them all. (Click here for the 'Lessons' page on the ROH website.) I'm also really pleased to see that it's being filmed on a couple of nights... with luck, then, a DVD might follow.