Sea changes: 'Left By The Sail Road' by Mark Deeks

This is a solo piano album of austere wonder. Composer and performer Mark Deeks hails from Northumberland, and in tribute to his home patch, the eight original pieces here are named in the county’s old dialect (the album also includes a cover version of John Ireland’s ‘Sea Fever’). A water theme runs through the record like a river, with tracks named for waves, floods, showers, ice… so we have, in some ways, a tone poem: a suite of works that, over its running time, builds a picture of the North Sea coastline in audio.

To do this successfully, there would have to be a starkness to underpin the picturesque, and MD achieves that balance perfectly – the music is beautiful throughout, but favours sparse reflection over ‘prettiness’. I think listeners of Glass, say, or Satie would find much to enjoy in these pieces: that’s not to simplify and say that MD is ‘like’ those composers – more that he also prizes the effects of a rhythmic pattern, the power of a silence, and the value of unhurried contemplation. 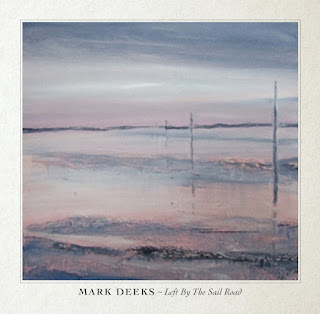 While the album sustains a coherent mood, close and repeated listening reveals the individual personalities of each track, the way they embody their liquid titles. For example, opening track ‘Wǽg’ (‘Wave’) features an undulating rhythm in the bass, perhaps unsurprisingly – but above that, the melody not only turns about itself in an ebb and flow movement, the chords cut across the bassline as if ‘breaking’ onto the shore. While later in the sequence, ‘Scúr’ (‘Shower’) moves the initial, insistent rhythm into the right hand, as if the rain is starting to pitter-patter onto the ground.

The superb ‘Flódas’ (‘Floods’) moves along with a more hyperactive, unpredictable gait, and ramps up the intensity until the melody almost breaks – bursts its banks. While the serene ‘Gyrwe’ (‘Wetlands’) – for me, one of the album’s absolute highlights – allows its left-hand to glide calmly while the restrained, delicately-judged interventions of the right-hand conjure up the momentary drips and breeze-driven disturbances from the reeds and grasses.

I was completely won over by this record’s confident restraint: give it time and drift through its space.

It’s also worth mentioning that, perhaps due to its steady pace and focus on melodic ambience, much of the suite sounds accessible to fellow pianists – and sure enough, MD has produced a very limited run of sheet music for the album, available to buy alongside the CD. To buy either – or, let’s not be coy – both, you can visit the artist’s Bandcamp page for the album here.
Posted by Adrian at 10:20