I imagine it's fair to say that the artist Rachel Whiteread is still best known for her major 'public' works. In the UK, she won the Turner Prize in 1993 with 'House', the concrete cast of an entire derelict residence (now itself demolished), and in 2001, provided one of the pieces for the temporary outdoor location on the 'fourth plinth' in Trafalgar Square. This work was a resin cast of the actual plinth, placed upside down on the top to form a vertical double image: imposing, haunting and demonstrating a strangely austere wit.

I've also never forgotten seeing her Holocaust Memorial on a trip to Vienna several years ago. It's a large room-shaped cast, but with the appearance of a library turned inside-out: the exterior walls are lined with bookshelves, and the books have their pages, rather than spines, facing outwards. Not only did Whiteread's aesthetic approach capture the industrialised horror of its subject matter, the work seemed to illuminate this suppression of history, knowledge and identity: the attempt to not only wipe out the physical presence of an entire people, but also the very idea of their existence. 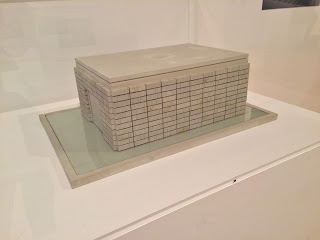 (The model of the Holocaust Memorial.)

So I was very curious to see the Rachel Whiteread retrospective at London's Tate Britain. I was having trouble even picturing how it would work - for a start, I'd hardly seen anything she had produced contained within an indoor location. Brilliantly, the show bats off any concerns along these lines at the outset. On arrival in the Duveen Galleries (the huge central halls), RW's 'One Hundred Spaces' installation - resin casts of the 'gaps' underneath various chairs - guide you towards the main exhibition area like an array of vast cats' eyes. 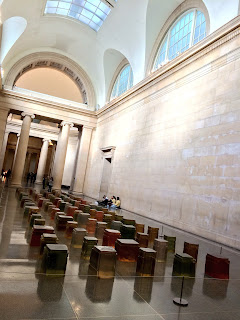 When you reach the corridor-like annexe in front of the exhibition doors, the major public works are presented through a range of photographs, plans, video footage and scale models. The models in particular are a great idea: they give you a view of the piece that you couldn't actually get in real life, and they also 'scale you down' mentally so you don't go in expecting to see something the size of 'House'.

Although, to be honest, it almost feels like you do. I can't think of an exhibition I've been to in recent years where the 'hang' has been so important, and so clever. On walking through the entrance, you find yourself in a corner of a colossal, single space. The map on the leaflet, which in most exhibitions typically guides you from room to room in sequence, here simply indicates the type of work you can find in each part of the sprawling, open area. So, while you can plan a route of sorts, and identify the phase or series of pieces you're looking at, it's far easier after a bit of acclimatisation to just wander around and absorb the sheer 'presence' of the sculptures, visiting and re-visiting pieces as something about one of them reminds you of one of the others. I did a circuit of the room 'on duty', as it were, sensing I was almost certainly going to want to write about it, and taking the photos for this post on my phone - then I put it away and spent at least twice as long again in the exhibition, just looking and thinking. 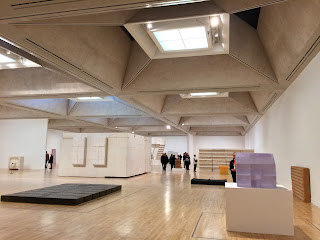 Two large-scale works do, in fact, dominate the space. 'Room 101' casts the room in Broadcasting House (former home of the BBC) where George Orwell worked, and which apparently inspired the infamous torture chamber in '1984'. Its apparent featurelessness again brings to mind the implacable, faceless bureaucracy of the novel, while at the same time forming a somehow pleasing monument to the old BBC building, the doorways, windows - even the plug socket - remnants of the former energy. 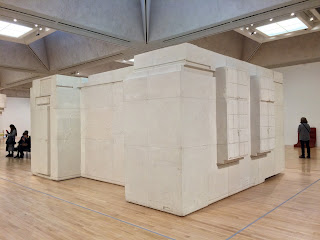 'Stairs', meanwhile, is cast from the staircase of a building where Whiteread lived, itself an old warehouse and, before that, synagogue. As the leaflet points out, the wear and tear on the stairs is testament to all those that had come and gone in the premises: but I was hypnotised by the surreal nature of the piece - the way it seemed only the two flights in balance were keeping it upright, and how the 'spaces' cast still looked like stairs but could no longer be climbed. 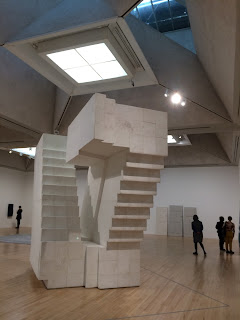 Surrounding these were a host of smaller works, some of them from early in RW's career. Seeing many of these more modest casts - furniture, utensils - made me realise why perhaps it is I'm such a fan of RW's work, even though I wouldn't say I necessarily liked every individual piece. But I recognise that I'm strongly drawn to art of any discipline where the practitioner works away at central themes with obsessive commitment - minimalist classical compositions, drone/riff-based metal or electronica, the paintings of Rothko, the novels of Golding. I felt this exhibition drew out a timeline of sorts for Whiteread, with 'House' as a kind of pivot: many of the earlier pieces seem to be a working-out, establishing a style, method and template leading up to a literal magnum opus. Then afterwards, the later work, which includes 'Room 101' and 'Stairs', while inevitably reducing again in scale, seems to display a constant refining and interrogating of ideas. The dimensions visibly contract as space takes over from form, and we see arrangements of boxes, casts of doors and windows, paper casts of shed walls... edging steadily from 3D to 2D. Absence - we see the merest fragment of an original location - replaces the oppressive presence of the earlier, bulkier pieces. She even calls her more recent large casts - cabins and sheds in secluded areas - 'shy sculptures', removed from any prominent view.

As well as making the viewer acutely aware of physical space, all of the work seems to inspire a range of mental reactions and responses. I found much of the exhibition inescapably political. For example, the bookshelves with only the outline shapes of the books remaining (work made that would lead to the Holocaust Memorial) seem to represent something so current: library closures, dismissal of expert knowledge, unthinking uniformity. Or the works on paper surrounding the development of 'House', where property is erased, vanished from the street. The constant motif of substance filling spaces illustrated, to me, claustrophobia, displacement, the stress of modern urban living, the fragility of our surroundings. 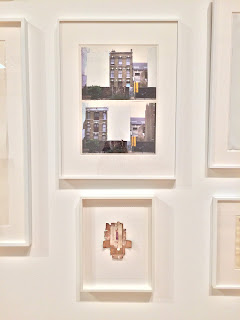 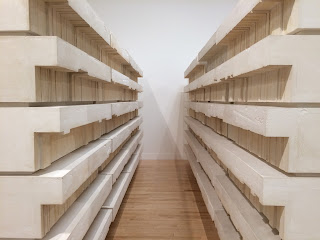 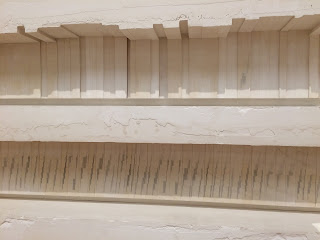 Emphasising these thoughts was - as I mentioned before - the superb way the exhibition was arranged, to the point where you almost felt you were in a Whiteread space yourself. The stone colours of the gallery toned so well with those of the exhibits (in particular, I was struck by how the boxes pieces were echoed by their environment), and the single-room layout meant that there were endless ways you could 'interact' with the work as a viewer. 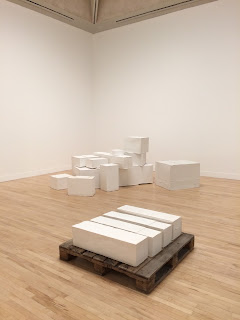 For all of these reasons, I would rate this exhibition as a must-see if you are in the area, and at all intrigued by artists with a singular vision of this power and consistency. Rachel Whiteread runs at Tate Britain until 21 January 2018.