Writing up a recent gig at the Barbican...

To begin with, the programme was really enticing - bringing together three composers covering such a range of styles, it gave pianist Helmut Deutsch the chance to display his versatility and virtuosity. The first half was perhaps, you might think, more familiar terrain: Schumann's 12 'Kerner Lieder', which Deutsch performed with a kind of propulsive sensitivity, keeping the tone delicate but - where the songs demanded it - fast, disciplined and precise, perfectly judging the sequence's overall move into more sombre territory.

After the interval, five Duparc melodies - bringing with them rippling cascades of notes, so even and fluent that HD's fingers seemed hardly at times to touch the keys. The near-indefinable 'sway' that seems to inhabit French art song in particular was fully realised and tangible here. What a fantastic contrast, then, to close the recital with Britten's Seven Sonnets of Michelangelo: knotty, unpredictable, with the fractured beauty of Italian edifices. 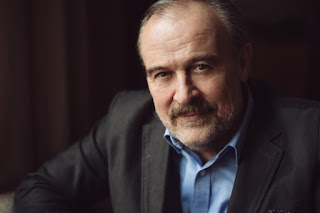 It made me realise how often art song recitals are themed with perhaps more unity, and nothing wrong with that: as an audience, you stay in the same stylistic place, with perhaps a single-country programme or sometimes, of course, showcasing just one composer. Or where the mood is consistent throughout - all love songs, say. But here, we had the privilege of seeing and hearing the pianist in fully chameleonic mode, able to switch soundworlds 'before our ears': I enjoyed this performance so much that Deutsch has now become one of my 'must-hear-whenever-possible' musicians, whoever the singer he is partnering with. Accompanying him tonight, in fine voice, was tenor Jonas Kaufmann.

As a card-carrying geek when it comes to accompanists, please forgive my slightly curmudgeonly 'reverse write-up' above. I mean every word - I thought Helmut Deutsch's playing was utterly marvellous that evening, for all the reasons I outline, and I had something resembling an epiphany about him. And while most coverage of song recitals focuses on the singer - I guess the clue's in the phrase 'song recital' - and even more so when it's Jonas Kaufmann, I couldn't help being irritated by the reviews I read that seemed almost unaware there was anyone playing the piano at all. One in particular reserved about seven words for the accompanist, two of which were, obviously, 'Helmut' and 'Deutsch'.

But of course, Kaufmann is huge news - all the more so, because he is only recently back after several months' recuperation from (squeamish readers, look away now) a burst blood vessel on his vocal cords (hnnnnnnng!). I'm glad to report that although he seemed to betray signs of initial nerves - he apologised for using a tablet as a safety net, since he was recital rusty - he soon settled down and assumed complete control.

The Barbican's acoustic - sometimes a bit too good, amplifying everyone's slight tickle of the throat into a tubercular hack - will never replicate the intimacy of a Wigmore Hall gig, but it allowed JK to use his great dynamic gifts. Despite huge reserves of power, he unleashes the fury only sparingly, and performs art song with great restraint (his 'Winterreise' with HD is a good example of this on disc). In this way, he drew in the cavernous hall around him, and left the audience in raptures. The final Britten song was particularly fitting, with a glorious unaccompanied passage - exactly what you'd expect from a composer in love with his singer.

(Even for those few minutes, however, I missed Helmut Deutsch's exquisite accompaniment...)

[PS: The great portrait of Helmut Deutsch is taken from the Europa Tickets website, but I couldn't see a photographer credit anywhere.]