Ordinarily, I'd arrange this round-up of my favourite live music of the past year in a fairly rigid format, event by event. Looking back on 2016, however - whatever other traumas the last 12 months have visited upon us, I feel privileged to have attended such an embarrassment of melodic riches. So instead, I will - with your permission - reminisce a little and try to order my thoughts so that the singers, players and companies I want to draw to your attention will stay with you.

Regular Specs attendees will know how vocal my support is for English National Opera - in particular, their superb chorus and orchestra. How they've justified that support in 2016, giving us: 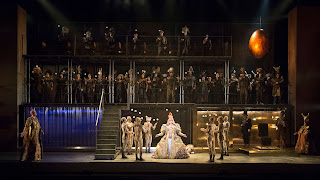 (The all-singing, all-juggling ENO ensemble in 'Akhnaten'. Photo: Richard Hubert Smith.)
While the ongoing season has its fair share of delights still to come, the Coliseum still has a cloud over it, its company embattled. But this ensemble is a National treasure, and I would still urge you to support them as much as you possibly can.

One other company was gamely vying for my affections over the year, though - Opera North. After first completing their innovative, dramatic concert staging of Wagner's Ring operas year by year - and, essentially, calmly nailing it - in 2016 they were ready to take the UK by storm. Lining up a series of complete cycles in several cities, the company made a rare visit to London. Lucky us. Camping for a week in the Southbank, we were treated to the cumulative power of the onstage orchestra, under the unflagging leadership of outgoing musical director Richard Farnes (what a send-off!)... and a group of magnificent soloists who sang and acted for all the world like they were broadcasting to millions. (Which, with the radio broadcasts and the forthcoming streaming of the filmed performances, they hopefully are.)

After such an extraordinary experience, Mrs Specs and I vowed to support Opera North and hear more of them when practical and possible. In early December, we went to Edinburgh to catch their Puccini double bill and, even more excitingly, a terrific production of 'Billy Budd' - superbly cast (three such powerful leads in Roderick Williams, Alan Oke and Alastair Miles) and inventively realised.

An ongoing theme of the year - and part of what made it so pleasurable for me, I think - was the opportunity to see some of my favourite artists more than once, cropping up in different guises and scenarios.

Mezzo Alice Coote featured in two of my favourite concerts of the year. She was an electrifying Angel, alongside Allan Clayton (again! hurrah!) and Gerald Finley, in Elgar's 'The Dream of Gerontius' (performed by the London Symphony Orchestra and Chorus under Sir Mark Elder). But I also want to rewind back to January for a gig I loved so much, I half-worried it would spoil me for anything for the rest of the year. This was a song recital in Middle Temple Hall, with AC accompanied by Julius Drake on piano. The duo are long-standing, frequent collaborators - their live 'Winterreise' on the Wigmore Hall label is one of my desert-island renditions - and this was perfection: a programme to dream of, performed with passion and commitment. Schubert and Strauss lieder (I was in heaven already), followed by Elgar's 'Sea Pictures'. AC brings to every song the same levels of characterisation and depth you might expect in full-blown opera - her voice is clearly a thing of beauty, but also conviction and power. The Elgar - so much more familiar in the orchestral version - gave JD a chance to produce a precise, but truly immense sound to match. No-one in the audience felt the lack of any other players. An early highlight that's still etched indelibly into my memory.

I've long admired both Carolyn Sampson and Iestyn Davies - so it was great to see them both perform in my first proper live 'Messiah', at the Barbican, just before Christmas 2015. Even better, I witnessed them work their magic twice more in 2016. I loved the concert staging of 'Orlando' at the Barbican with the English Concert, featuring ID's steely, unsettling Orlando and CS's delightful Dorinda. And again - back to song, my particular weakness - they came together again for a chamber Prom featuring songs by Purcell (in Britten's realisations), Mendelssohn and Quilter. The joy of hearing such beautiful - and beautifully matched - voices in the relatively intimate Cadogan Hall was only enhanced by the obvious chemistry between the duo, and the piano accompaniment from the great Joseph Middleton - in his element with both the company (he is CS's regular recital and recording partner - you should buy the two discs they've released so far IMMEDIATELY) and the material - especially the Britten. (Again, he's behind a recent double CD of the complete Purcell/Britten set - it's a must.)

A year featuring a new Jo Quail record is automatically great, especially since it usually means we get a stunning launch event to go with it. The latest album, 'Five Incantations', is essentially a five-part suite for  cello and electronics - a gorgeous sonic journey through the elements, by turns insistent, reflective, challenging, soothing - and rewarding throughout. Deliberately crafting the suite to be playable solo, live, from start to finish, JQ performed the entire album in sequence as the centrepiece of her concert set. It had exactly what we all hope for when hearing a favourite record live: everything we love about the album, but to the max. The dynamics were emphasised in the wonderful acoustic setting (St John on Bethnal Green), so the slower sections seemed to cradle the entire congregation, while the louder passages - with their immense beats generated from striking the cello body - threatened to dislodge the belfry. We were quieter than church mice, until our riotous (and wholly deserved) applause at the end.

It was a joy to see Paul Simon at the Royal Albert Hall. I've seen him a couple of times in the past - once at Wembley Arena, back in my teens, when we were so near the back I could barely make out the man himself. I also went to the Graceland 25th anniversary bash in Hyde Park. Both great gigs, but this felt particularly special. PS seems to be enjoying a 'late-period' golden age, with two excellent recent albums housing a clutch of new songs that can hold their ground against his formidable catalogue. Perhaps as a result, the chap we see onstage is a witty, cheerful and generous performer (with no sign of the slightly aloof/serious aura one might have associated with him previously). Two and a half hours of bliss, ranging across his whole career (including the Garfunkel years), seemingly a lifetime of shiver-down-the-spine moments (the drum intro to '50 Ways', the saxophone solo in 'Still Crazy...', 'counting the cars on the New Jersey Turnpike', 'the words of the prophets are written on the subway walls'...) I was welling up then, and now, as I type this, I'm welling up again.

Serious aloofness - of the BEST possible kind - is now more in P J Harvey's line. Always worth listening to, but in the past something of a chameleon in both sound and image, her most recent two albums - steeped in social commentary and violence at home and abroad - have formed the basis of a live show that, in its own way, is dramatically and disturbingly spectacular. A group of besuited, slightly grizzled men (partly drawn from in and around the Bad Seeds' orbit) form one of the tightest backing bands imaginable: percussive and propulsive. PJH herself - all feathers and foreboding - utterly commands the stage, purely through the power of her delivery. There is no banter with the band or audience - just the austere, searching lyrics. However, at the Brixton gig we attended, a couple of slips meant we got a glimpse behind the armour as she succumbed to some very human corpsing. A severe but sensational experience. 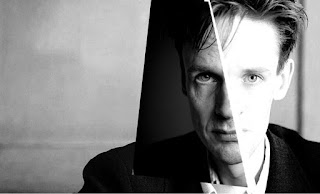 Finally, Ian Bostridge gave a fearless performance in 'The Dark Mirror' at the Barbican - a staging of Hans Zender's interpretation of Schubert's 'Winterreise'. IB has a long association with this song cycle, and the production - probably impossible with anyone else - had him interacting with DVD recordings of his younger self singing the same music some 15 years ago. The chamber orchestra, formed from Britten Sinfonia, gathered at the side of the stage like a scratch band - keeping the necessary balance between the Schubert 'spine' and the largely respectful but, at times, deliberately queasy and jarring cabaret-style arrangements. Netia Jones directed IB not only through his own past, but against a stimulating, shifting collage of graphics and text - a little like being immersed in a 90-minute Saul Bass title sequence. What higher praise?

Postscript
Reading this back, it suddenly leapt out at me that two venues which have both given me more than their fair share of delight during the year have not been mentioned at all: the Royal Opera House and Wigmore Hall. Here, I've surprised myself. It's interesting that in casting my mind back over 2016 for events that 'stand out', I've perhaps unfairly overlooked 'comfort' venues that provide such consistent entertainment.

Certainly, the ROH had its fair share of excellence to my mind. On New Year's Day, we treated ourselves to the 'Cavelleria Rusticana / Pagliacci' double bill, staged thoughtfully as stories set in the same town. I loved the production of Enescu's 'Oedipe', with its extraordinary performances from Johan Reuter in the title role and Marie Nicole Lemieux as the Sphinx. And the current season kicked off with a supremely confident turn from Sonya Yoncheva as Bellini's 'Norma'.

Wigmore Hall continues to offer one great evening after another, particularly in song. Many of my visits are to do with the Schubert complete songs project, and I'm hoping to write a special post about that as it draws to a close next summer. But what a privilege to hear such artists as Susan Graham, Anna Bonitatibus, Jamie Barton - to name just a few of the visitors it's so rare to find in such intimate surroundings... It's rather too easy to take it all for granted - something one should never do. This will give me much food for thought in 2017.