Readers with excellent memories and above-average loyalty may remember that one of my best-loved and most-played discs of last year was 'Fleurs', the debut recital album by soprano Carolyn Sampson and pianist Joseph Middleton. It has since nestled itself comfortably amid my all-time favourites.

I was so excited about their follow-up recording, 'A Verlaine Songbook', that in the few weeks ahead of its release date, I actually felt like it would never come out. It reminded me so much of waiting for new albums from the bands and artists I idolised in my youth, and it felt good that this time it was classical music inspiring a healthy dose of unchecked enthusiasm, not to mention anguished impatience.

Now it's arrived, I'm overjoyed to report that it's stunning. Obviously, I haven't lived with 'A Verlaine Songbook' for as long, but early signs are that the new disc is every bit its predecessor's equal, if not even better. I know! Better than 'Fleurs'! Imagine!

Reassuringly, 'Verlaine' was recorded in the same place, with the same instrument, a Steinway D. So the acoustic - which they utterly nailed on 'Fleurs' - is as pristine, and as familiar. While I'm aware that very few recital partners exist in a bubble - they all regularly sing and play with other musicians and ensembles - I'm finding it hard to think of any duo that better capture their particular rapport on disc than CS and JM. Both find beauty in precision, and JM's high notes dance cleanly around CS's vocal - neither could 'drag' a phrase if they tried. However, the sound is so pin-sharp that even in the split-seconds between note-making, we hear the occasional pedal stroke, or lightning intake of breath - and the result is an encompassing intimacy, a genuine 'you're in the room' feel. What's the opposite of airless? Airful? It's warm, real. 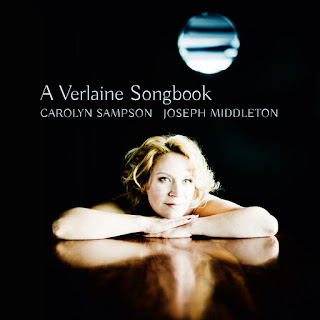 As the name rather gives away, all the songs are settings of Verlaine texts - so this intimate atmosphere establishes the perfect mood for an entire set of 'mélodies'. At a hugely generous 80 minutes (which I think is still more or less the maximum amount of music a CD will take), it's possible to become almost intoxicated at times, to drown pleasurably in the waves and ripples courtesy of Debussy, Fauré and a host of fellow composers. (CS and JM are master programmers, by the way, as 'Fleurs' fans will already know.)

It's a pleasure to see some complete sets of songs find their way onto the album. These include Fauré's 'La Bonne Chanson' - the last two settings in particular ('N'est-ce pas?' and 'L'hiver a cessé') require superb transitions of mood from the pair: JM darts across the keyboard with dizzying velocity before 'bringing it back home' with bluesy closure, as CS negotiates the shift down in gear with subtly effective adjustments to volume and tone, allowing some syllables to fade away, suggesting a closer audience than in a concert hall. (It really brings home the thought that melodiés are, after all, chansons' posh cousins.)

Debussy's 'Ariettes oubliés' form the (near) climax to the album, and again for me the highlights are two songs mid-cycle. 'Chevaux de bois' seems to involve JM playing more notes at once than he has fingers, or possibly than there are keys on the piano - but a song like this is also a perfect vehicle for CS, whose ability to sing at such exhilarating speed (perhaps baroque-fuelled) with no loss of character or volume more than matches the power accompaniment and in fact rides it to greater heights. After this comes the astonishing 'Green', its nudging piano riff punctuating what I think must be the most sensual performance from CS I've ever heard. Initially, the tempo changes accentuate the voice's gentle pleading, while the second verse carefully steers her towards the tour de force of the final minute: as the lovers in the song relax post-passion, the high note on 'baisers' ('kisses') simply stops. Then, she sings almost conversationally, as if leaning into the listener's ear alone - with all the feeling, expression, and placing of the note still present, she becomes gradually softer, more delicate, as the accompaniment resolves around her.

It's one of those apparently small, but in fact crucial points in a performance that make you realise you're listening to people who really are brilliant: the kind of decision that makes a rendition truly great. 'Green' is a beautiful song, but this version stopped me dead in my tracks - it's that good. It makes me desperate to hear the duo tackle a complete 'Proses lyriques' (they tantalised with just the one on 'Fleurs').

'A Verlaine Songbook' also deserves praise for unearthing some of its perhaps more buried treasure. There's a wholly positive Polish influence. Marvellous to hear female composer Poldowski (Belgian, with a Polish dad) championed with five songs, all distinctive in their elements of playfulness and passion, and perhaps understandably (without wishing to second-guess or over-simplify), they seem to bring out an especially sympathetic response from the soprano. And one of my personal favourites on the record is Szulc's setting of 'Clair de lune', as its glorious descending piano figure in the intro shape-shifts beneath CS's gliding vocal (an audio encapsulation of the still light caressing the rippling water) before returning at the close.

I could go on: there's so much to enjoy - from the bass rumble the JM touch conjures up during the Debussy 'Clair de lune' to the unhurried, seemingly effortless elegance of CS's performance of the classic Hahn setting of 'L'heure exquise'.

I can't recommend it highly enough. Buy it. Or ask Santa, but for pity's sake, do something. Now I need to return to being excited about what the pair of them will come up with next...