Body of work: Antony Gormley at the White Cube

Not only is this my second art-related post in a row - but another in my slightly regrettable series of 'just in time' features: Antony Gormley's exhibition 'Fit' is running until 6 November (2016, for future archivists) at the White Cube, Bermondsey. If you can squeeze a visit into your schedule, I urge you to go. 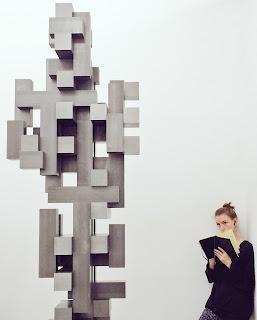 So much of Gormley's most celebrated work seems to explore how the body affects or influences space and landscape: the towering Angel of the North, the 'you-are-being-watched' lurking figures of 'Event Horizon', even the 2,400 performers who signed up for 'One and Other', taking over the Fourth Plinth in Trafalgar Square and invading the consciousness of passers-by, one hour at a time.

As a result, I'm always particularly intrigued when he decides to show his work indoors - it's as if his normal M.O. is inverted and we experience the pressures of confined space upon the body. Anyone who has seen the thronging clay figures of his 'Field' installations (see photo below) may recall or at least recognise a simultaneous feeling of uneasy amusement and slight claustrophobia when gazing at the miniature masses. I also remember loving his Hayward Gallery exhibition from around a decade ago, 'Blind Light', where he used the (admittedly cavernous) dimensions available to create some powerfully interactive pieces ('Blind Light' itself was a glass room-within-a-room, filled with a white fog - viewers could wander inside and disappear from the sight of their companions outside). 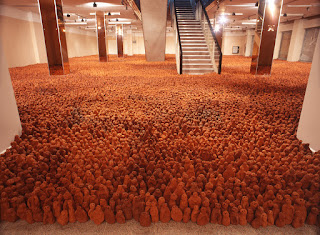 'Fit' is a somewhat different proposition. AG has divided the gallery into small rooms, most of which contain just one or two pieces. Often, there are only narrow gaps and channels available to look at the sculptures, and this effect is heightened when, of course, you are sharing the experience with other visitors.

As such, you can definitely feel some kind of exchange going on - the space is bearing down on the pieces, while the pieces seem to want to burst out - and you're in the way. In the end, the pieces conform to their surroundings. As if succumbing to a sort of gravitational force, every component of every piece is boxed, compacted, straight-edged - I didn't see a single curve in the entire exhibition. The familiar contours of Gormley's Gormley-based humanoids are wholly absent. 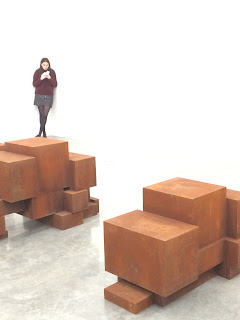 For all that, it's clearly still the human body that interests him, and one of the most striking - and endearing - features of the show is how these apparently simplified block figures still express so much personality and individuality. The exhibition blurb points out that certain pieces are counter-reactions to others - and one pair they might have had in mind are 'Pose' and 'Big Shy', below: 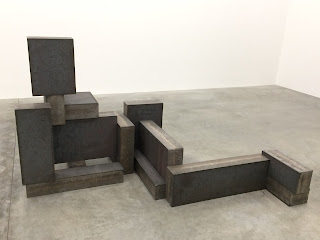 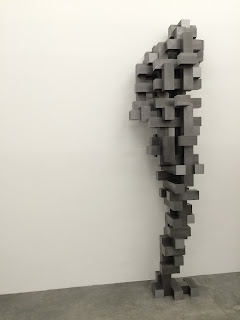 To me, the confidence of the reclining figure versus the coyness of the timid wallflower are right there, in those chunky, solid arrangements - as clearly as if they had painted features. Throughout, the 'characters' on display might be made of lines and cubes, but Gormley does not go for complete regularity or symmetry: thin iron blocks might be placed off-centre from the main body of the piece, or steel rods might stick out at a slightly different length or angle on each side - as if suggesting sideways turns, or hand gestures.

For all this concentrated use of space, there are two relatively expansive show-stoppers. 'Passage' is this exhibition's 'Blind Light' - but reshaped in this exhibition's image. While that fog-filled room felt edge-less, open - here the participant walks into a tunnel, just wide enough to hold a person (again, with only straight lines, no curves, around you). To anyone observing on the outside, you are swallowed up by the darkness. Inside, though, you can test your own tolerance for the walls around you as far as you want into the 12-metre corridor - if you turn around, you can see outside perfectly clearly. As an artwork, it achieves two simultaneous viewing experiences: inside, as your eyes get used to the tunnel (it's dark, but not the 'total darkness' of, say, a cave system where you can't see your hand in front of you) you gain a heightened self-awareness. The noise you are making, externally (the echo of your footfall) and internally (your breathing, in particular - I briefly started talking to myself). But it's as gripping an experience for the companion outside the tunnel entrance, aware only of sounds, and the memory of your shape until you re-emerge. 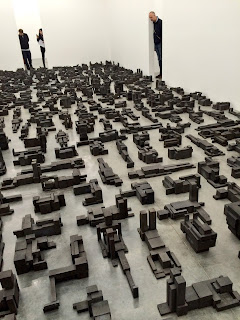 Finally, we even get a 'sequel' to the Field series, called 'Sleeping Field'. Like its parent, the new installation at first impresses thanks to its scale (it occupies one of the rare large rooms in the show) - but arguably, the delightful variety of postures taken up by the faceless block figures gives them even more of an individual presence than the curvy, yet rather shapeless, creatures in the original. With several vantage points available at various stages of the exhibition, it was possible to pick out one 'favourite' after another.

(The photo of one of the original 'Fields' is from AG's website - and I couldn't see a credit. However, photography was allowed at the White Cube - so the other images here are by Specs!)