Another relatively last-minute decision to break free of the military-campaign precision of my Royal Opera House bookings (involving the Mrs, a group of friends, and several illegible diagrams) and grab a single seat - just to treat myself - at the Coliseum.

I've written before that I don't automatically gravitate towards the English National Opera - only because they present all the operas in translation and I tend to prefer hearing the original language. But I found a couple of productions irresistible - and to a certain extent they've confirmed my misgivings: the new opera 'Thebans', by Julian Anderson with English libretto by playwright Frank McGuinness sounded perfectly natural and involving, while Handel's 'Xerxes' - though beautifully sung - rather wore me down with its endless repetition.

Visit number 3 was to Puccini's 'The Girl of the Golden West' ('La Fanciulla del West'). My main motivation was sheer curiosity: obviously, more or less all opera demands some suspension of disbelief, but a western - can it really work? I also wondered if this was a last-chance saloon situation - no sign of the Royal Opera House production (staged several times and last seen in 2008, I believe) and this was its first appearance at ENO in over FIFTY years. And what finally ended the dithering was the fact that so many people seemed to really love it. So: *click*.

The story takes place in Gold Rush California. Local miners frequent the Polka saloon, where the main focus of their attention (apart from the whisky) is understandably its owner, Minnie. Minnie's view of the miners is essentially maternal - she leads them in bible class and keeps their finds in her safe - although she has her work cut out fending off her most persistent suitor, sheriff Jack Rance.

While the community is distracted in a manhunt for the outlaw Ramerrez, a stranger called Dick Johnson arrives at the Polka. It turns out that he and Minnie have in fact already met and shared a fleeting, romantic encounter. In front of an imploding Rance, the flame between the pair re-ignites in no time, and they agree to spend the evening 'catching up' at Minnie's cabin.

As the net closes in, the alert among you may suspect a connection between Ramerrez and Johnson - and you'd be right. They are one and the same. At the cabin, Minnie and Johnson declare their love. A posse of miners turn up and reveal Johnson's true identity to Minnie - she manages to get rid of them but, betrayed, sends Johnson packing as well. He's shot the second he walks out of the door, so perhaps not 'Grade A' bandit material. Minnie realises she's in love with him come what may, and nurses him in the cabin. When Rance turns up to make an arrest, Minnie counters by challenging him to a card game for Johnson's freedom. With some sleight of hand trickery, she wins and Rance departs, temporarily defeated.

Johnson keeps on the move to evade capture but to Rance's delight, he is taken by the mob eventually. As they are on the point of hanging him, Minnie arrives and challenges the miners to deny her the man she loves after all she has done for them. Gradually, she wins them over, and leaves with Johnson to start afresh. 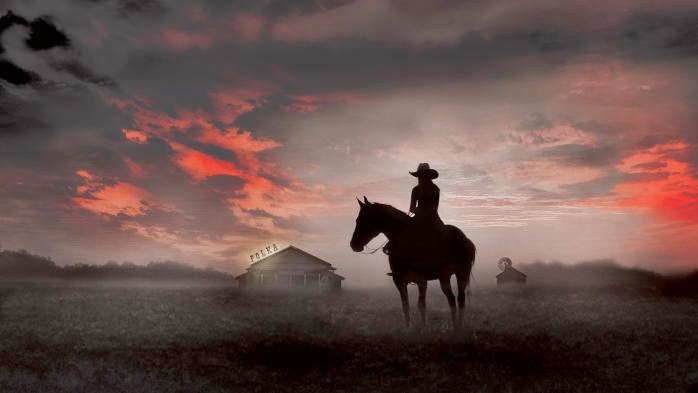 (The image is by ENO Design Studio.)

I absolutely loved this opera, and it intrigued and delighted me on so many levels. ENO's programme notes are very good on the background to the unusual subject matter. I came away thinking how it seemed to be an opera of the 'common man', with fallible, ordinary people getting drunk, collapsing with homesickness, abusing their limited power and letting their dreams run away with them. The programme explains how 'West' (like 'Madama Butterfly' before it) were both based on modern, naturalistic plays by US writer/impresario David Belasco, giving Puccini a consistent way into these lower-octane scenarios. I can't help thinking that a fascination - however temporary - with America(na) must also have been a factor, enabling him to place these more domestic dramas into a still exotic, otherworldly context.

Richard Jones's production brings this out beautifully, with the three key locations - Act I's Polka saloon, Act II's cabin and Act III's marshal's office - almost suspended against a jet black background, very much scenes of the mind, a fantasised wild west. In a powerful 'coup de theatre' at the opera's close, when Minnie and Johnson prepare to leave, the two lovers remain still, while the office building (containing the rest of the cast on its terrace) recedes further backstage, as if the dream is ending. It's a terrific live equivalent to the end of western films where, as the main character rides away, the camera 'looks back' at the homestead or town receding in the shot.

Making the most of the contrast, the music and acting are affecting and convincing. Puccini himself was on fire, and the ravishing score seems to anticipate and pre-emptively improve on every western soundtrack to come. It's so wonderfully sympathetic to the action: standout moments including Minnie's rapt, lovestruck sighs at the end of Act I and - as anyone else can attest from the edge of their seats - large stretches of Act II, with the hyperactive exchanges in the scrabble to hide Dick from the posse, and in particular the hushed, scratchy pulse underpinning the card game. Conductor Keri-Lynn Wilson drew suitably dynamic cries and whispers from the orchestra, expertly balancing tenderness and tension. And the translation really worked: even I would admit that it might've been arguably stranger to hear a saloon full of cowboys conversing in Italian, but Kelley Rourke's version included some US idiom and turns of phrase for an extra dash of authenticity.

The three main performances are all worthy of special mention. I'm still getting used to the Coliseum and I think some singers occasionally lose some syllables beneath the orchestra. (I wonder if this is to do with my sitting in the Upper Circle - as I didn't notice it during 'Thebans' when I was near the front.) Peter Auty as Dick - the tenor role - occasionally fell victim to this, I think - but overall it was no problem, particularly since his physical acting was phenomenal, showing Johnson's desperate efforts while injured to scale the ladder to 'upstairs' in the cabin, and hide himself while being unable to freely move his whole body, thanks to the wound. Baritone Craig Colclough made a superb Rance: nervy, physical, slimy, aggressive.

But the evening belonged to Susan Bullock as Minnie. To begin with, she had seized on perhaps a brave interpretation of the role that allowed Minnie to suggest a jaded resignation, as if her light had slightly dimmed, only for Johnson to rekindle it. Every facial expression communicated the possibility that this was her last chance at real happiness. I had read that Minnie is a demanding role vocally - and now I've heard it, I believe it isn't just a matter of coping with Minnie's sudden outbursts of shrill joy or anguish. It's also the wide variety and quick exchanges between quiet and loud - sometimes even abandoning song altogether with a few extremely powerful uses of speech. Susan B's singing was so flexible that moving between these volume levels, speeds and techniques seemed to come so naturally, they were just part of how the character 'spoke'. In particular, there's a thrilling sequence where Millie is hiding Johnson and offering constant reassurance - "It will be all right, I love you" - repeating in various combinations over and over until suddenly she simply says: "I love you". So genuine and unforced: it was a moment to stop the heart.