Brilliant evening at the Lexington (near King's Cross, London) last week. Three acts on the bill who sound very different from each other, but who are clearly kindred spirits, and whose music fit together so snugly - the whole gig had a real sense of form to it.

The first artist was cellist Jo Quail, and regular readers of the blog (thank you, darlings, thank you) will know I'm a fan - whereas the middle act Seventh Harmonic, and top of the bill Daemonia Nymphe, were both complete unknown quantities to me.

Jo's set was one of her most driven, and arresting yet. After one stately track, 'The Falconer', from her first solo record - it was straight into the tunes from the forthcoming new album, with the fireworks of 'Laurus', its rattling percussive bow strikes and circling melody lines. New listeners were suitably awestruck - much like the friend I'd brought along, Jon, who in uncharacteristically ruthless mood, yelled at me "I'M GOING TO GET A RECORD!" and sprinted to the merch stand more or less as Jo's final notes of the evening were still ebbing away.

As she explained from the stage, Jo trails and develops new pieces in live performance before recording them. So, those of us who'd seen her a few times before could listen out for - and look forward to - these unreleased tracks from previous gigs. However, there was still a surprise in store, as Jo played a brand new track, still 'in draft'. 'DD' (its working title) currently has a more sinister feel overall, with a grinding riff looming over a haunted melody. What felt remarkable on the one hearing is the variety of volume and dynamics Jo achieved with just cello and loop station, and the contrast of loudness/lightness only made the track more addictively unsettling. Can't wait to hear how it progresses.

Seventh Harmonic took the stage next. As far as these 'dark folk' genres are concerned, I would guess that the closest fit for this group is 'neoclassical'... although, as I think I've mentioned before, I'm a bit uncomfortable describing any fiercely original musicians as 'neo'-anything - as if they're picking up some kind of sonic baton.

In fact, one of the things I really liked about this group was how fresh they sounded. We're all familiar with how mainstream acts sometimes 'appropriate' classical music for added pomp or gravitas, but this is worlds away from that. Instead, Seventh Harmonic made me think of what classical musicians might create if they found themselves transformed into a rock band.

Using a heady concoction of pounding percussion, electric bass (sometimes bowed), violin and mezzo-soprano vocal, the songs conjured up an orchestral mix of drone and groove, the sweep of several miniature symphonies. Completing the package were the brilliant visuals, elemental images that enhanced the music's timeless quality. A guest spot from Jo Q on the track 'Winter', brought the set to a thrilling close - and showed an inspiring sense of community between the musicians as the Harmonics gathered supportively round Jo (seated and static behind her acoustic, rather than electric, cello), playing as much to each other as to us. Gorgeous stuff. I'm seeing them live again in a few months' time. I'll have picked up some of their records by then, and arm myself for even closer listening. 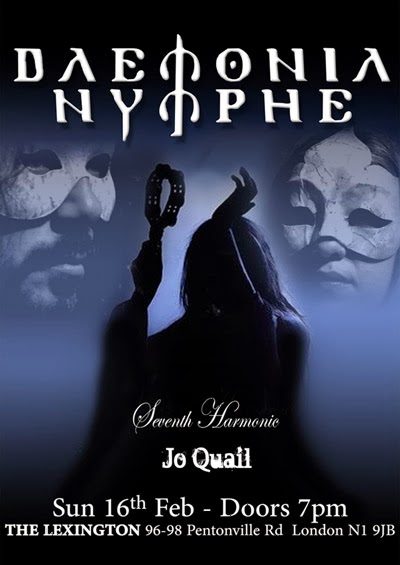 Daemonia Nymphe also create songs of brilliant immediacy and impact, but from very different building blocks. The band are Greek, and they have constructed a whole universe based on the arts of ancient Greece - that includes not just as inspiration for their music or subject matter, but their entire aesthetic - with onstage dance, and all the performers in costumes and masks designed to evoke the atmosphere of, say, the Delphic theatre.

In the absence of recorded music from that time, the group have realised their version of it in an impressively authentic way - taking their cues from the rhythms of ancient Greek poetry and lyrics (Sappho, for example) and playing them on historic, traditional instruments. I also warmed to the way the operatic female vocals were set against the half-spoken, half-chanted male vocals - it really brought to mind for me the interplay between actors and chorus that you find in ancient Greek drama, and acknowledged the fact that we have little to go on when it comes to conjuring up 'tunes' from several millennia ago. It seemed to me that they have successfully created a kind of missing link between that recitative style that we might imagine being delivered to music by the ancient performers, and the 'traditional' music of more modern times.

Because that is how it felt to me - alternative folk in its most accurate sense - the folk music of Greece that 'could have been'. The songs are often short and sharp - they work as earworms, they could be learned and passed on (if you have the language), they make you want to dance. Pipes and percussion provide the necessary links with more familiar 'folk musics' and help you find the common listening ground.

All three of these acts deserve more of your time.

Daemonia Nymphe are providing the music for a production of 'Medea' at the Riverside Studios, London during March, and on 23 March are playing their latest record, 'Psychostasia' live at the same venue. Find details at the Riverside website here.

Seventh Harmonic live here on the web, and the next gig of theirs I know about is on 4 May, supporting Rosa Crux at the Garage, London.

Jo Quail is also on that 4 May bill, and her website is here.

And all three have Facebook pages with more information.

(The image is the flier for the concert, and I couldn't see an image/picture credit for it - if anyone would like to supply this so I can add it, that'd be great. Thanks!)
Posted by Adrian at 04:38