Two concerts on two consecutive nights (again) - oops. Fortunately, the Thursday gig of choice was a choral performance at Cadogan Hall. Mrs Specs, our Prom-going friend David and I were privileged to see and hear - at extremely close quarters - the Choir of Westminster Abbey performing a programme of Christmas music.

However, it wasn't a traditional carol concert - it was aimed more at the classical music buff, which is why it was very useful to have David along and agree, as usual, to be subject to my relentless interval questioning. (Not that he had much choice, because we were holding the Extra Strong Mints to ramsom.) This time, I was asking about how pedals worked on a harp. Answer: "I'm not good with harps."

The harp in question was played to accompany the Choir on Britten's 'A Ceremony of Carols' - probably the most well-known piece in the programme, and the only one containing tunes I was familiar with. From our place in the gallery, on the right, I had a bird's eye view of the harpist and realised that I'd never seen anyone playing the harp from that angle before. It really underlined just how dextrous they need to be - not only to keep their hands darting across the strings at an awkward angle, but also to hit the right pedals at the right time with their feet.

Another bonus of our high viewpoint was enjoying the effect of the long scarlet robes worn by the choir, who appeared almost to glide along the floor like holy Daleks. Obviously this illusion was shattered when they had to use stairs to get on and off the stage...

The Britten suite was the centrepiece of the evening. Before that, the Choir sang some 'early' Christmas music - Byrd, Praetorius and an awe-inspiring 'O magnum mysterium' by Victoria - then the second half was given to modern Christmas compositions. The most well-known of these was probably John Gardner's 'Tomorrow shall be my dancing day'; the best, in my opinion, was a Peter Maxwell Davies setting of a sacred poem by (the) Rowan Williams. Maxwell Davies can be a bit forbidding - and the prospect of a carol by him seemed to cause David some serious concern during the interval, at least until we gave him a mint - but the piece achieved the trick of sounding less difficult than it is. We could hear that the choir were sounding some unusual harmonies, but intervals you might have expected to clash somehow gelled and gave some very high voices an unexpected layer of gravitas. Also crucial were the words: I regard myself as agnostic, but I was actually deeply affected by the lyric - not so much by the subject matter perhaps, but the willingness to use such unusual language. It's made me want to find some more of the former Archbishop's poetry. It reminded me of my studying days, when the sacred verse of the metaphysical poets like Herbert and Donne made such a big impression. If you're interested, the poem is here.

The following night, without Mrs Specs or David, I went to see Orbital at Brixton Academy. This is the third time I've seen them. First time round - before their extended break from each other - I never caught them at all. When they reunited, I saw one of the reunion gigs at Brixton, but something made me buy an upstairs ticket. Rather than fling myself around like a loon, I opted to go for the seated area (you're not actually allowed to stand in 95% of the upstairs area at Brixton, presumably in case you launch yourself accidentally into thin air and plummet into the crowd below). I knew their light show was supposed to be incredible, and reasoned that I would be quite happy lounging around just soaking up the spectacle. This was true up to a point - it was a visual feast - but the grass is always greener and the music is so infectious, I wished I'd been on the ground floor dancing.

The next time I saw them was in, of all places, the Royal Albert Hall - again, constrained to some extent and the seats got in the way once more. So - I made myself a promise - next time, I'd put myself in the midst of the throng.

I was pleased, then, that this latest gig was also at Brixton. It has a sloping floor. Why can't all venues have sloping floors? I can't think of anywhere else where the short of arse, like myself, can cheerfully buy a standing ticket and still turn up with a reasonable expectation of seeing something. It would be very rare, for example, for me to go to any other standing venue and get a snap showing as much of the stage paraphenalia as this one: 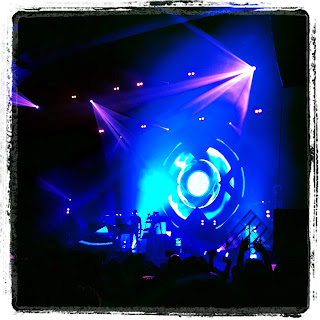 Obviously, I still enjoyed the odd reminder of why I often choose to get myself a seat now that I am a respectable gent approaching middle age. For a start, Brixton has what I shall call a 'sloshpit' - an informal audience area where people try to drink full pints of beer and pogo simultaneously. Not only is this destined to end badly, it usually ends badly for someone who isn't actually trying to 'slosh', but just happens to be innocently passing on the way to the loo. Luckily, I avoided a lager bath this time.

I was also unsettled by the fact that when I see Orbital, I AM often surrounded by people who are seriously loved up. I wrote a review of the last gig (the electronic version is now lost to the ether, sadly, with the demise of the Word website) where I bad-temperedly named some of the pseudo-steamy dances performed by my neighbours as, among others, the Teapot and the Bowel Movement. It wasn't pretty. Fast forward to this gig, and one bloke - who had clearly never been hit by the gallantry stick - decided to wrap his arms around his girlfriend and THEN jump up and down wildly to the beats. Quite what effect this must have had on her internal equilibrium I dread to contemplate. It also meant that to talk to her, he had to 'dip' her and yell in her ear, as if they were in a techno version of 'Happy Days' or something. Of course, if you do this to someone in a standing gig, you inevitably slam them into someone else, ie me. Over and over again.

This unexpected intimacy aside, nothing could detract from the exuberant, in-your-face, welcoming blast of Orbital's music, which can simply make everyone in a huge room blissfully happy. From the first glimpse of the brothers - in those torch-glasses that make them look like a couple of the Star Wars sand-people have flung off their robes because they've been working out, god dammit, and you're going to check them out whether you like it or not - everyone has a grin on their face a mile wide. It stays throughout.
Posted by Adrian at 15:13