[RETRO-SPOILER ALERT! I'm blogging about the films 'Skyfall' and 'The Shining' in this entry. I don't think I've given anything important away about the former - but as the latter is a re-release of a 30-year old cult favourite, I've taken the liberty of discussing the events in it freely. If you think you might get to a screening of 'The Shining' or get hold of the DVD, then with my blessing, go and watch it before coming anywhere near this..!]

I don't get to the cinema nearly as often as I used to, so it almost felt like a throwback to my student days when I found myself at the flicks twice this past week. I suppose that's not the only reason I was wrinkling my nose at the whiff of the past - after all, 'Skyfall' marks 50 years of James Bond on film, and my other movie of choice, 'The Shining', is over three decades old.

I'm basically a huge Bond fan, so I was expecting to enjoy 'Skyfall'. But I hadn't expected to enjoy it quite as much as I did. There's not much point in my attempting to review it as such - it's received the odd bit of publicity here and there already, and its surprises and secrets are out there on the internet, beyond the reach of espionage. So without straying into spoiler territory (I hope), I'll just jot down four things that really struck me about it.

1) Sam Mendes might seem an odd choice to direct, but I can't remember the last time a Bond film was made by someone who was already a 'proven' talent/name - let alone a director equally at home in the theatre or arthouse. The difference shows. It's not just that the film looks amazing - it does - but it's also there in the use of the screen. During one of the major set pieces, an important building catches fire. You'll be amazed at how - whatever is going on in the foreground - the ruin is kept shimmering, ablaze, hovering in shot, the light still flickering against the characters. The film also draws you in with perspective, as the actors move through and around rows of desks, Tube tracks, casino staircases. It's as if to say, you don't need 3D to create something spacious and massive.

2) I do like a bit of graphic art and design, and the famous 'Bond opening title sequence' here is an absolute humdinger - almost disturbing in parts and fiendishly clever. It also uses rows/patterns/shapes in the same way the film goes on to do.

3) It's difficult to put one's finger on how the film seems to succeed in having it both ways: combining the more 'modern' elements (Craig's 'by the Books' approach; making the violence and, well, occasionally the sex, look like it hurts; even the odd sweary word) with some of the old-school flair and humour. The answer I've come up with so far is 'playing it straight'. I'm thinking here of the conversations M and Bond have while driving in the old Aston Martin; and the very final scene in particular - both to some extent 're-live' parts of the old films, but the ripple of pleasure comes from seeing how skilfully Mendes - and Craig - play them so they're totally true to this new interpretation. I wish I could - with a clear conscience - say more.

Fast-forward four days, and rewind 32 years: I went to the Curzon Soho to see the re-release of 'The Shining'. This is the US cut of the film - about 20 minutes longer than the one shown and released on DVD in the UK. Please forgive me if I assume you know a little bit about this film - if you haven't seen it, I've already warned you off this particular post - but the longer cut mostly adds some extra backstory. A doctor visits the psychic son, Danny, after an early 'episode' and mum Wendy ends up explaining how Father Jack hurt Danny while drunk. We get a bit more of a feel for why the family seems a tad dysfunctional before they even get to the haunted hotel in the mountains. But the main body of the film - the relentlessly claustrophobic, nerve-shredding stay in the Overlook - is basically as everyone remembers it.

Over the years, I've had a bit of a love/hate relationship with the film - partly because in my youth I had really, really loved the book. Stephen King famously found the Kubrick version cold and unfeeling - hardly surprising since the terror in the novel is how the malevolent spirits in the hotel break the family, then the father's mind. The weapon of choice is a relatively impotent roque mallet and Jack succeeds in killing no-one. In a last moment of clarity he allows Danny to escape and faces down the hotel's evil spirits alone. In other words, there's self-sacrifice, redemption, all that stuff. Kubrick, who by this point had made heartwarmers '2001' and 'A Clockwork Orange', probably found the original plot a bit 'Little House on the Prairie', so created something wholly different. Give Jack an axe, for a start, and all bets are off. The hotel chef, who is also psychic like Danny and tries to come to their rescue when the boy sends a telepathic SOS, survives the novel but in the film, he gets the chop within seconds of arriving. On first viewing years ago, I felt this was a bizarre waste of a character. Now, I'm not so sure...

Equally, the casting of Jack Nicholson was a bold decision, partly because he is such a singular-looking actor. No-one takes any convincing when the guy's totally off his nut, charging around with an axe, but in the early scenes he struggles to convey a sense of normality. In one scene, he holds his son close and comforts him, telling him how much he loves him and it'll all be ok. But he LOOKS LIKE JACK NICHOLSON. *Gibber* If I was that kid, I'd be running a mile before he finished his first sentence. No doubt about it - unlike the book, something is wrong with the film's Jack from the very start.

In the cinema, I probably concentrated - really concentrated - on the film for the first time, even though I felt I knew it quite well. Shining Lore makes another clear distinction between book and film: that in the book, the hotel is targeting Danny's psychic power, which is where the pathos comes from - that first, the evil forces use Jack to try and get at the boy, and then it proves their undoing when he momentarily comes to his senses. In the film, the hotel is after Jack. Jack has 'always been the caretaker', and his face appears in a 1921 photo on the wall in the film's famous final shot. But the more one thinks about this, the more clearly Kubrick seems to signpost it. For example, Nicholson's 'twitchy throughout' interpretation of the character makes sense if you decide the hotel has him in its clutches before he even arrives. There is no evidence that anyone else is ever considered for the caretaker job. Even when he takes a phantom drink in the phantom ballroom, the barman Lloyd already knows he wants bourbon - which, of course, turns out to be 'Jack'. The film's only proper 'special effect' is of Jack looking down into a model of the hotel's maze (there's no maze in the novel), and seeing Wendy and Danny in there - who are there exploring outside in 'real life'. It could just be an empty bit of showing off, but it now feels more to me like the point where Jack and the hotel acquire the same, all-seeing perspective - become one, in effect.

The extraordinary look of the film is obviously easier to appreciate in the cinema. Because I already knew what Jack running around a corridor would look like, I took the time to just look at the corridor. It struck me that the truly scary thing about 'The Shining' is Kubrick. Essentially, every shot is symmetrical, mirrored, patterned. To a point of near-mathematical precision. It's fairly well-documented that Kubrick was an obsessive perfectionist but it's all here, on the screen. Mirrors, matches, doubles, echoes - everywhere.

Why add a maze to the hotel? Because then there are corridors outside to echo the corridors inside. (The novel has topiary animals that come alive.) Why change the weapon to an axe? Because Jack is doomed - assuming he'd succeeded - to live through what his predecessor had done and kill his family in exactly the same way. (Unlike the book.) Even the double elevator doors that spill blood are only in the film.

It's a truly enigmatic piece of work. If you're feeling strong, you can seek out seemingly endless theories and critiques about 'The Shining' - in the new documentary 'Room 237', for a start (not seen that yet), although the internet as ever is both your best friend and worst enemy for this kind of thing. I came out with a new respect for it - I had made the mistake of thinking that it for all its precision, it had treated the book carelessly. It now feels like Kubrick just took King's family into places even he didn't want them to go.

Speaking of which - here's the way into the auditorium at the Curzon. A long, narrow corridor. Thanks, Curzon. Thanks very much... 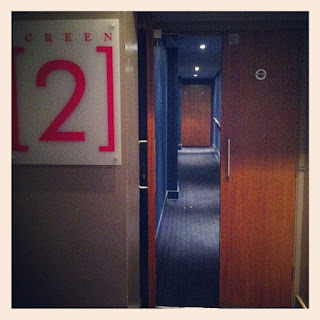