Last night I went to 'The Opera' for only about ... (*counts on fingers*) ... the fourth time in my life. As this was the Proms, it wasn't a fully-staged affair, more of a concert performance - but of the whole work. I was slightly apprehensive, as the opera in question was 'Nixon in China', the first by contemporary composer John Adams, and first performed in 1987, only 15 years after Nixon's visit to Mao actually took place. (The folk sitting next to me began to discuss where they were in 1972 when the trip made the news. Felt quite young, which is pretty unusual at gigs these days...)

I suppose I am a textbook 'casual' opera fan - I own a few on CD, but if pressed, I'm more familiar with particular arias or excerpts from opera compilations or TV. Any I've tackled before in their entirety have been the conventionally accepted classics - Puccini, Verdi ... oh, and I saw a production of Tchaikovsky's 'Eugene Onegin' in my student days. More of that later.

But I'd never seen any contemporary opera. How 'challenging' was it going to be? And the subject matter - would it be just ... silly? If by now you're wondering what the hell I was doing there - it's because I love Adams's instrumental music. Seek out 'Shaker Loops' or 'Short Ride in a Fast Machine' if you don't know them (there's a Naxos disc containing both). Adams often seems to be described as a minimalist composer but not, I suspect, in the sense that everything is basic and bare; more that a fixed number of ideas are fully turned over and explored. He is totally unafraid of hooks and repetition and, surely, for any of us who have come to classical music after, say, electronica or metal, it seems like a very natural way to put a track together.

So I was curious about how this would translate to opera. Answer: with absolutely zero fuss. The libretto, by Alice Goodman, is an endlessly fascinating piece of poetry in its own right. It banished my fears that an entire opera sung in English might just strike me as odd after hearing the indecipherable beauty of performances in another language. (I've now decided that the old production of 'Onegin' is to blame for this prejudice - that was sung in translation and I've always remembered one of the nerve-shredding climaxes to an act being graced with the words: 'There goes a shepherd. The world is at peace. I'm not.')

The action of the story is by turns satirical and surreal. Richard and Pat Nixon arrive in (the then) Peking and a series of events take place across the first two acts: Dick and Mao's first verbal sparring match; a welcome dinner for the US party; Pat's sightseeing tour; and finally an extraordinary section where the Nixons watch a ballet performance that features the violent punishment of a peasant girl and, basically, get stuck in and try and help her out. My immediate reaction to this is that it symbolises the wider action, suggesting the US blundering in to try and engage foolishly with a culture and people they can never understand. Who knows?

Mao's wife - a terrifying creature who is portrayed as the engine driving her husband's actions - emerges as a key figure in this scene as she sings a climactic aria about power and revolution. Like Lady Macbeth, she uses visceral, anatomical imagery to convey her conquering any potential weakness. After the mayhem subsides, the final act features the story's main players - from East and West - reflecting quietly, not only on the visit, but on their lives and careers. There's no attempt at realism by this point - the characters' thoughts zig-zag across each other as though they could almost converse, but they cannot all be in the same room or space at the same time. The dialogue is both abstract and affecting, leaving you - deliberately, I'm sure - in two minds about where your sympathies, if any, might lie.

Excitingly, Adams was there himself, to conduct. And his music was in fact - just as I expected. The same repetitive hooks and driving rhythms but with colourful and evocative touches - the use of sax, for example, to add a jazz feel (at one point Pat sings, 'I like it when they play our tunes'). Somehow he finds the meeting point between 'riffs' that one could arguably recognise as his own, fully-formed style, and motifs that are reminiscent of Chinese music - especially when played on synthesiser, so you can't readily fit the noise to a familiar instrument. I also think he must have a highly attentive ear for speech and how to match the music appropriately - for example, characters speaking in an 'aside' would suddenly sing more quickly and quietly.

I was absolutely rapt for every single minute. I want to mention one bit of stagecraft in closing - all the more brilliant because, at the Proms, performances like this are only ever 'semi-staged', if that. One of the original huge moments in the opera is the landing of the American plane at the airport. Musically, it's tremendous, but in 'proper' productions, an enormous plane facade is used on stage to deliver the Nixons into the action. Instead, last night, as the music built to the jet's arrival, the chorus began passing a model aeroplane along the row, above their heads. It then went down to the row below, that little bit nearer to us, until finally, one of the chorus gave the plane to Nixon, who by this time was walking down the steps to the stage. Nixon took it without missing a beat, then presented it as a gift to Mao later in the scene. Genius. 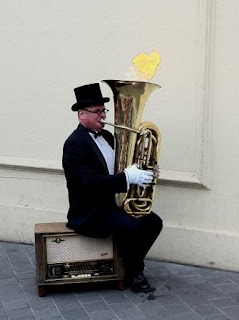 I should also quickly mention the Proms matinees Mrs Specs and I caught last weekend. Both were recitals by Cameron Carpenter, a virtuoso organist, of Bach - and other pieces (some by the performer) influenced by the great wigateer. Carpenter is certainly eccentric - he comes across as a kind of Morrissey or Marc Almond of the organ, and performed on both days in a sleeveless t-shirt and sequined trousers. (More of this sort of thing.) His brief half-time interviews with the Radio 3 bloke were full of pithy quips and wry observations, but crucially - and I appreciate this wouldn't have been amazing for the radio audience - he simply appears to be doing things that humans cannot do.

He arranged one piece for pedals only, so he could lean back on his chair and rest his arms. The noise he was making with his feet alone seemed to render the rest of the machine unnecessary. He mashes up material - some of which was never intended for the organ in the first place - from different composers to create new organ works. And even better than that, he's DESIGNED a portable digital organ, which - once built - will allow him to tour freely with whatever repertoire he likes and not rely on any unpredictable pipe organs he might find in various venues. Chap!

Always good to catch the chap in the picture, too. Surely we can get him onto the Proms stage one day...?
Posted by Adrian at 17:12