The Light fantastic: 'The Light in the Piazza', Royal Festival Hall

I bought a ticket for ‘The Light in the Piazza’ based on intrigue. I go to very few musicals, partly because I can’t quite explain how I feel about them. I love some, can’t bear others, with very little rhyme or reason. (To the way I feel, that is, not the musicals...)

But I’d read that ‘LitP’ was a little different - that its (excellent) reputation was partly to do with its straddling musical and opera forms to unusual effect. Also, it was to play at the Royal Festival Hall on London’s South Bank for a limited run, featuring Renée Fleming: operatic royalty, for sure, but also an artist unafraid to tackle some leftfield projects. I feel lucky to have seen her perform as the Marschallin in Strauss’s ‘Der Rosenkavalier’ (when she was on the point of saying farewell to the role): but I’m also a card-carrying fan/evangelist for her rock CD, ‘Dark Hope’. So I was already an enthusiast for RF’s multiple vocal personalities.

In fact, the overall casting, as you can see above, only underlines this cross-genre element, with luminaries drawn from opera, film, TV, and musical theatre. I booked, knowing I’d regret it if I didn’t. And I’d urge you to go if you get a chance - it rewards your attention with something quite special. 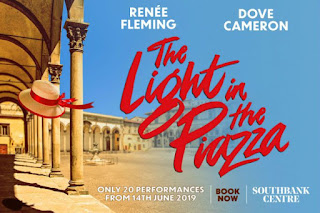 Italy, the 50s. Margaret Johnson, a wealthy American, is spending summer in Florence, trying to show her daughter Clara the places of interest she’d toured with her husband Roy, years before. Clara, however, is easily distracted, particularly by the attentions of Fabrizio, a handsome local who has fallen for her at first sight.

Margaret, however, has other ideas: there is something Fabrizio doesn't know about Clara that will make a dalliance problematic. But for all her initial attempts to frustrate developments, this will be no mere holiday romance...

From that point on, there’s a kind of leisurely tension to proceedings: we gradually find out the details of Clara’s secret, the closer the couple become. Are we heading for bliss or disaster? Well, I’ll try not to spoil it... and in any case, the young lovers - or, indeed, the conventional 'plot' aspect of the romance - are not necessarily the centre of the work. Other relationships, in various states of repair, mirror and orbit around Clara and Fabrizio, and here I think the true sophistication of the concept lies.

The Naccarelli family are like human warning signs, with Fabrizio’s hapless brother Giuseppe barely holding onto his wife Franca... while his parents play out the routine of ageing philanderer and long-suffering companion. Each of these couples, including Clara and Fabrizio, play a specific part in bringing Margaret to certain realisations about her own life and marriage: mistakes made, roads not taken, the chance to put things right. It made me think that the real ‘light in the piazza’ is the illumination the other characters bring to the real focus of the drama, Margaret.

The action delightfully subverts our expectations. For example, the family speak in a riot of excitable Italian - untranslated - that for a very short while seems like cliché (I’ll come back to this). But it becomes apparent that this is a send-up of the Americans’ view of them. This changes as Margaret warms to them and understands them more deeply. Every ‘cheap shot’ in Act 1 - the elder brother’s gauche self-confidence, the sister-in-law’s vampishness, the father’s swagger - is revisited with more emotional depth and resonance in Act 2.

This reaches a natural resolution in the wonderful ‘Let’s Walk’ duet between Margaret and Signor Naccarelli. We’re fully primed for the old roué to try it on... and Margaret does indeed reconnect with a more romantic, flirtatious version of herself. The purpose of their stroll - suggested by Margaret - is to work through a potential obstacle the father has placed in the way of the youngsters’ happiness. But she doesn’t bring him round by initiating, or worse, falling prey to a seduction. Instead, the song celebrates the elegance of mature affection and mutual respect. Fleming absolutely radiates the inner warmth needed to melt the old boy’s resistance. (And the brilliant Alex Jennings never lets the father become a 2D, ageing man-child; he's as whimsical, complex and knotty as everyone else.) 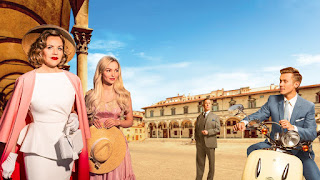 Perhaps it goes without saying that we negotiate this emotional voyage so effortlessly due to the masterful music and lyrics of Adam Guettel. The piece doesn’t aim for ‘Opera’, in my opinion, but it is operatic. The score (powerfully played by the orchestra of Opera North) is intense, lush and at times insistent, punctuating the dialogue, giving a feeling of through-composition-meets-soundtrack. The Italians using their native tongue may evoke another dysfunctional Florentine family from somewhat further back in history, in Puccini’s ‘Gianni Schicchi’ - and Rob Houchen as Fabrizio tackles his solo numbers with the full-blooded passion you’d expect in a tenor’s aria.

If (and it’s a big over-generalisation of an ‘if’) you think of musicals as functioning a bit like opera seria - the dialogue/recitative barrels the plot along while the songs/arias freeze time for the characters to pour out their emotions - it shines a, er, light on why ‘LitP’ is a little different. The songs are so finely wrought that they seem to move both plot and character forward; in the act of revealing their thoughts and feelings, the protagonists also give us crucial information about what led them to that point, and take decisions about what to do next.

One example is ‘Dividing Day’, a magnificent Act 1 song for Margaret where we come to understand her motivations more deeply. RF is extraordinary in these solo moments - it's a marvel how she blends her jazz/Broadway timbre with the hint of 'going the full soprano' in the higher-octane moments. Such a captivating, distinctive sound.

Another favourite would be ‘The Beauty Is’ - so eloquent a song that to say too much is almost a spoiler. Not only does it allow one character to open up their innermost thoughts with such delicacy, its reprise later on, from someone else’s perspective, is almost impossibly satisfying. I also think this song gives the lie to some comments I've read that the piece doesn't address the complex issue at its heart.

There are also scenes where Clara succumbs to panic attacks, all in song. The other characters soothe her in their own styles, while her vocal escalates in terror - Dove Cameron, walking a vocal tightrope throughout between girlishness and adulthood, sustains this feat admirably.

So... why use a book at all? (I’ve read a few comments that the book perhaps can’t match the songs.) Ironically, I think it’s the book that allows us to stop and take a breather. The dialogue doesn’t deliver the same emotional heft as the lyrics, true: but it offers moments of release, and true wit - for example, Marie McLaughlin as the apparently passive Signora, casually destroying the fourth wall with sublime nonchalance near the start of Act 2.

‘LitP’ is comfortable in its shape-shifting skin from the outset, so it may take a you a minute or two to acclimatise - but a verse or two in, and I was thoroughly entranced. By the end, I'd been thoroughly entertained and profoundly moved. A show to make you think and feel.

(Both the images are taken from the publicity material for the show - the interior of the RFH, sadly, does not look quite like that!)