Liz Phair's debut album 'Exile in Guyville' arrived in 1993, when I was a student. At that weird time of life, no longer a teen but not quite an adult, both home and away ... when you persist in thinking you're a grown-up despite reminder after crushing reminder that you're not: a record like this can hit you in the solar plexus.

While I enjoyed most genres of music I came across, at that point I wasn't listening seriously to, say, classical, jazz or folk: rather, those days were the absolute height of my rock and indie youth. (Two of my most memorable gigs while I was at university were James and Ride: textbook.) If you liked an unashamed jangle, they were heady times. Just picking a few names, almost at random: the wry melancholy of the Smiths and the Sundays taking us into the euphoric flipside of the Stone Roses (and the 'Madchester' scene), and then bands like Suede heralding 'Britpop', just around the corner. And those are just acts from these shores (the UK). Whose names begin with 'S'.

I loved a great number of these bands, and still do. To my delight, some are still going or have reunited. But back then, the way pop and rock kept coalescing into movements meant that, by definition and distinction, certain artists came along who stood out a mile. Without my trying to claim any kind of retrospective woke-ness, many of the musicians that pushed my buttons at the time were women: among them PJ Harvey, Björk (in the Sugarcubes as well as solo), Tori Amos, Kristin Hersh and Tanya Donnelly (Throwing Muses and more) ... and - especially - Liz Phair. 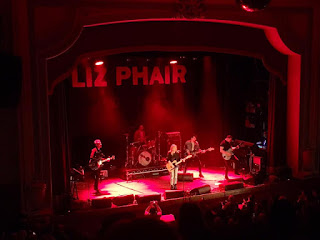 All of the artists I mention above seemed to come to their craft, and their instruments differently. Their records had a sense of self that wasn't solely confined to an alternative point of view in their lyrics, but was there in the entire atmospheres they created: there was honesty, aggression, tenderness and unpredictability in the melodies, arrangements, production. It's impossible, I'd argue, to imagine anyone else making any of the albums these women were releasing - that, at any rate, is how special they felt to me.

There I go, trying to explain the effect an artist like Liz Phair had on me: I can only imagine how exhilarating and empowering her music must have been for women listeners. 'Exile in Guyville' still feels like one of the most forthright and least compromising albums released in the last few decades - while remaining an utterly joyous listen. It even has a concept of sorts: its 18 tracks over 4 sides of vinyl are deliberately structured and sequenced as a mirror/riposte to the Rolling Stones' 'Exile on Main Street'. While the Stones album is generally accepted as some kind of masterpiece, it's surely one of the most swaggeringly blokey records ever to earn the term - and as such, it's the perfect springboard for LP's open-hearted, sexually frank and emotionally naked confessionals.

No-one else sounded like this. For a debut album, it's frighteningly fully-formed, and for a double, impeccably sustained. (Not that one should treat the album as if it was a lucky lightning bolt of inspiration - LP is also about graft: the brilliant 25th anniversary box-set of 'Guyville' includes the handsome body of work she had already built up on her 'Girly-Sound' demo tapes.) The arrangements are spare and uncluttered, foregrounding LP's distinctive rhythm guitar which, for sure, could ring and chime - but also warp and weft, scrape or churn, mutter and mumble, bending each track into shape. The voice is forward in the mix, but laconic, sometimes going a bit too low to sound truly comfortable: at once, this makes the listener lean in - LP is somehow intimate and intimidating, wanting you to listen, refusing to let you not listen.

I never thought I'd get to hear Liz Phair live. It's a bit like doublethink - I knew full well she was still a current, working musician (six albums now and counting) - but I somehow never expected that to translate to UK concerts in the here and now. And suddenly, supernova! A couple of dates in honour of the 'Guyville' reissue... so I booked my ticket for London's Islington Assembly Hall. Upstairs, seated, because I'm older now. 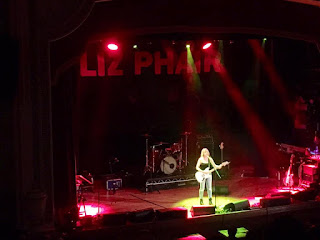 I'll be amazed if I don't look back on the evening as one of my gigs of the year - of the decade, even. The band were monstrously good: I was struck by how rarely I see a group with a three-guitar front line - we got subtlety and we got soloing, but in between, the fast and loud numbers really took off, amping up those unmistakable rhythms Phair created. The celebratory aspect of the tour translated onto the stage, with all the players looking like they were having the time of their lives, and communicating that to us. Witnessing the energy and electricity coursing through the performances, you'd have thought 'Guyville' came out 25 days ago, not years. LP was in glorious voice, all attitude and agility.

While selections from the first album ultimately dominated the evening, this wasn't one of those gigs where the artist plays a classic record in order from start to finish. I think that was a good decision, because it allowed this line-up to get their hands on some highlights from LP's later records. It was great to hear a few songs each from 'Whip-Smart' and 'Whitechocolatespaceegg' (her second and third albums), which display similar brilliance and character to 'Guyville' - just with shorter running times and, inevitably, without the 'shock of the new'. Personal favourites had the band snaking through the shuffling 'Uncle Alvarez' and nailing the juddering beat of 'Cinco De Mayo'.

More recent albums also got a look in: with a bit more production gloss than the first three, they're sometimes described as lightweight fare in comparison... but the LP hallmarks are still there. A genius outcome of the current band make-up is that they flesh out the 'lo-fi' early stuff, but give a raw edge to the later material - 'Lazy Dreamer' from the 'Somebody's Miracle' being a perfect example. Unifying the songs in this way only underlines what a coherent, distinctive back catalogue this is.

Perhaps the section I'll cherish the most was a spontaneous 'off-piste' section (as LP herself described it!) where the volume came right down and for a short while we were in the largest control booth available, 25 years ago, as Phair and one of her right-hand men performed a stately 'Ant in Alaska'... which they then followed with my all-time favourite LP song, 'Explain it to Me'.


(Video: 'Explain It to Me' - which appeared on the soundtrack to the film 'Thirteen')

Buried mid-'Guyville', this restrained track positively shimmers, one of the most eloquent expressions of how Phair can sound so delicate, yet determined at the same time. As it unfolded in front of me, quietly propulsive, I had to pinch myself, close my eyes and then open them again, so perfect was the moment. There's no need to ask more of a concert, or performer.

(Apologies for the pun in this post's title. But I could have gone for 'Liz-lington!', so think on.)

Here is a Spotify playlist that sticks as closely as possible to the gig setlist. However, please note that a new, as yet unrecorded song was played which of course is not on Spotify. In its place, I've added another of my favourite LP tracks, 'Nashville' from her second album, 'Whip-Smart'.