In recent months, when the day job has produced its fair share of stresses and I've still tried to 'work hard / play hard' - that is, still take in as much live music or art as possible - I know that the blog suffers. I sometimes find I've been to a whole range of performances or shows much faster than I can actually write about them. Not an unpleasant problem to have, of course, but I get annoyed with myself at being so slow to celebrate or get the word out about what I've been enjoying until weeks afterwards.

This is particularly true of the most recent run of productions by English National Opera (ENO). The last time I reported back from an ENO trip was my post on 'Salome', the first opera of the current season. It certainly seemed to polarise audiences and critics, but I really felt it was an important and arresting interpretation. As the opening salvo in a season which artistic director Daniel Kramer intends will explore the impact of toxic masculinity / the patriarchy, it felt like ENO had real venom in its fangs.

Since then, I've managed to catch all of the subsequent productions in the season, apart from the recently-opened and well-received 'La boheme' (not seeing that until February - woe!) - namely, Gershwin's 'Porgy and Bess', Donizetti's 'Lucia di Lammermoor' and most recently, a staged version of Britten's 'War Requiem' to commemorate the Armistice Centenary (that is, 100 years since the end of the First World War).

Is there any other work quite like 'Porgy and Bess'? While it's clearly a fully-fledged opera, it has 'showstopping' numbers in the sense a musical does, and of course revels in Gershwin's particular synthesis of jazz and folk, dressed in classical threads. I wonder if it's a textbook example of a piece that many people feel they've seen, but in fact haven't. This definitely applied to me: I realised my familiarity with a lot of the tunes was through the Miles Davis LP. 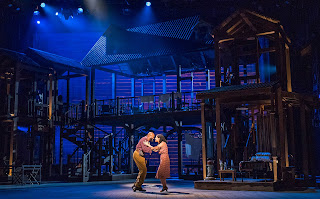 The production had a real sense of occasion about it. ENO had honoured the Gershwins' intentions of assembling an all-black cast (in the appropriate roles) and chorus. Conducting the ENO orchestra was John Wilson, widely recognised as having a particular affinity for classical Americana - not only through his much-loved series of showtune and musical Proms, but also, say, his series of brilliant Copland recordings for the Chandos label. From the gospel sheen of the onstage ensemble to the exuberant punch of the players, the evening certainly swung. The staging was traditional yet stylised - the tenements a skeleton network of rooms and stairs that allowed the actor-singers to display a gutsy physicality, using all the nooks, crannies and shadowy retreats available. Porgy and Crown's staircase fight had me feeling the pain of each blow in the same way watching 'Raging Bull' might do. The soloists that really stood out, to me, were those who translated this physical, 'from the gut' heft into the singing, slicing through JW's rich soundworld: these being Eric Greene's Porgy - a startling portrait of damaged nobility and naivety, Nmon Ford's Crown - a domineering performance that seemed to consist of 95% sinew, and Nadine Benjamin's Clara, making an immediate, unforgettable impression with the opening 'Summertime'.

You could not have asked for a greater contrast than 'Lucia di Lammermoor'. This production's aura of intimate menace drew you in like a chamber piece. I think Sarah Tynan's interpretation of the title role deserves an enormous amount of credit for this - somehow she still managed to sing dramatically and powerfully, yet bring an almost introverted quality to Lucia. Even in the mad scene, she wasn't unleashing the fury... she was unravelling, coming apart - the otherworldly sound of the accompanying glass harmonica only serving to enhance the effect. This shattering of her mind was given a shocking visual metaphor in a very clever staging coup: after the murder, she is seen in profile, sitting on her favourite perch, eerily pale, seemingly unblemished. Only when she lets herself down to wander across the stage do we see her right-hand side, previously hidden from view, drenched in blood - half Polyanna, half Carrie. 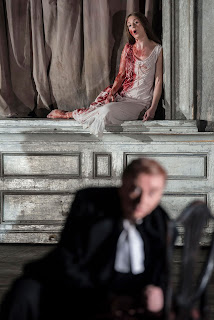 You are made throughout to feel the claustrophobia of Lucia's situation. An argument is made that she and her brother Enrico (an explosive Lester Lynch) have never really had the chance to grow up: Lucia a 'little girl lost' and Enrico a petulant bully, attempting to repress all his adult impulses (including a struggle against forbidden feelings for his sister), seduced instead by their nursery toys. Lucia's lover Edgardo is a lightning bolt of machismo, their 'love' seemingly closer to infatuation, a Boys' Own version of romance. Even the mighty ENO Chorus take on a sinister collective persona, looming in the guise of guests or servants, closing in on the characters en masse, watching their every move, restricting their space.

Mention of the ENO Chorus, and the masterful way they move as well as sound, brings me on to 'War Requiem'. I've never seen anything quite like this at the opera. If we want our art to be the best possible synthesis of emotion/passion and skill/achievement - then this is the sort of thing we need to aim for: an experience that convinced as both a labour of love and a triumph of intellect.

Probably a good idea to start with the staging, since many would reasonably ask: why stage the piece at all? But I think a more accurate description is a 'setting'. Daniel Kramer has enlisted the services of photographer Wolfgang Tillmans as stage designer. Whether taking unforgiving candid portraits or near-abstract compositions, Tillmans is a master of the direct, unflinching image. Sequences of photos and illustrations, projected to huge dimensions, hoover up your gaze. From historical depictions of horrendous war injuries, to contemporary captures of modern-day street violence, Tillmans's visual choices are a testament to the impact of the still image, a documentary of the outcomes of fear and hatred. One moment of 'mobile' stagecraft - the snowfall explosion - gains a shocking immediacy as a result.

Another reason these monumental, altar-like diptychs and triptychs work so well is the contrast between their implacable stillness and the fluid movement of the chorus and actors. The overall group was made up of a one-off ensemble featuring the ENO Chorus, the ensemble from 'Porgy and Bess', and Finchley Children's Music Group. A dumb-show narrative of sorts gave the action a framework (in particular, a pair of war-damaged children moving through a vicious circle to become enemies), but the ensemble's universal dark attire - putting them in a kind of part-peasant, part-military every(wo)man space - allowed you to focus on what they did rather than how they looked. Sometimes they were onlookers but often full participants, whether consoling children or brandishing knives, their tightly choreographed patterns across the stage lending a quite different air of ritual to that you might feel from a concert performance in a church. And I think it's significant to note here that 'War Requiem' - a thorny, original and challenging work - is normally performed static, with score in hand. Here both ensemble and soloists had to memorise and fully act whichever character or group they were personifying at the time. Whatever one's reaction to the staging, I don't think this significant achievement should be overlooked. 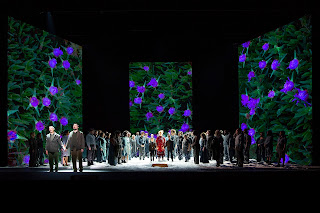 The three soloists - Emma Bell, David Butt Philip and Roderick Williams - sang with great force and poignancy, acting these 'parts' that aren't quite there with charisma to spare, but also with a sense of modesty that deferred to the vastness of the overall 'project'. RW, in particular, could steal your attention and break your heart one moment, then fold himself back into the action the next. This was too important a message for any grandstanding. Martyn Brabbins, ENO's musical director and a true champion of modern British composers, was conducting, bringing out extraordinary dynamics from the orchestra as they shifted between chamber and full configurations (in line with Britten's demands).

From where I'm sitting, then (usually the Upper Circle), ENO are giving us a superb season. Does the toxic masculinity theme carry? - so far, I'd say yes. There is a school of thought that identifies most opera as essentially misogynist due to the fates of many of its heroines - that's a conversation for another time. But these productions have brought to light specific examples where male violence begets male violence. They go so far as to examine what makes a man a monster or killer - whether it's relentless exposure to war and its effects, a recurring cycle of abuse, clinging to a notion of feudal/familial honour, or fighting your way hopelessly out of poverty and loneliness... But crucially, they never excuse it, exposing men's weakness and failure to conquer these impulses and desires without resorting to their basest level.

When I see ENO following through on stuff like this, I get increasingly bruised on their behalf when either the press or social media persists in badmouthing them. This could be something relatively trivial, like the ludicrous brouhaha over the 'water bottle' policy which led to one commentator in particular wishing a speedy end to the 'Nazi scum' organisation... right through to the director Barrie Kosky's recent comments on Bachtrack giving ENO well-meaning (I'm sure) but rather contradictory advice. In a nutshell, Kosky felt ENO should get rid of their key practice of singing in English (I was surprised at how readily some people agreed with this, as though accessibility - in this case, to those with poor sight who can't rely on staging or surtitles - wasn't a crucial part of ENO's mission). Yet, on the other hand, he thought ENO should be 'everything that Covent Garden isn't', including assembling a specialist company of soloists and performing works 'that you wouldn't normally see'. Elsewhere in the interview, he makes some upfront statements about how his company, Komische Opera in Berlin, benefits from the subsidies available in Germany that allow them to price tickets lower than the cinema... and I think it becomes clear that Kosky is speaking from a place that ENO will never get to occupy.

This kind of attitude also seemed to colour some of the responses to an enthusiastically received one-off concert performance at the Barbican of Mark-Antony Turnage's 'The Silver Tassie' - an opera originally commissioned by ENO. Some commentators' main takeaway from the success of the evening was to have a pop at ENO for not reviving it for the Armistice Centenary. Leaving aside what I'm sure might have been colossal practical considerations (it seems to me that a stand-alone event with no staging is not the same undertaking that a full-on staged revival over several performances would have been), let's enjoy the success of 'The Silver Tassie' for what it was - by all accounts a complete triumph for all concerned on the Barbican stage.

Then let's return to the separate, but no less compelling triumph of ENO's 'War Requiem'. With its bold idea to flesh the work out into three dimensions, it is attempting reinterpretation and reinvention of the familiar into something with a flavour of arthouse edginess. And with its combination of the 'P&B' and ENO choruses, and collaboration between British and German creative minds, it quietly sends out a diversity message that won't be lost on the range of audiences coming to see it. Mission, at this rate, accomplished.