Kate Bush and I have never met, but nonetheless, we go back rather a long way. I was a bit young to be affected by the impact of her debut single 'Wuthering Heights'... But fast forward to the mid-80s (the arrival of puberty and a decent record player - heady times) and I was exactly the right age to be seduced by the all-conquering 'Hounds of Love' album. That EMI were canny enough to put out the best-of collection 'The Whole Story' hot on the Hounds' heels meant that, all of a sudden, it became clear there was a wealth of past wonder and strangeness to discover. 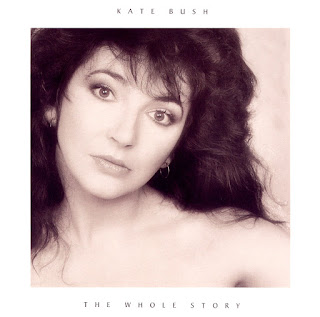 She is without doubt one of my favourite musicians of all time. Of course, I had an almighty adolescent crush on her - posters on the bedroom wall, fan-club membership - and she remains the only public figure I've ever written a song about. (Unlike her work, those particular four minutes of lovelorn student angst are perhaps best lost to posterity.) She was - and is - a highly visual artist: in her appearance (I don't mean her 'looks' as such - more her attention to costume/make-up and so on, always in service to the material), and especially in her movement and sense of drama. Dance and mime are so crucial to almost all of those unforgettable videos - and it would seem to her overall perception of her art, from the decision to stop touring after the exhausting demands of her first shows.... to her triumphant return to live performance in the fully-staged 'Before the Dawn' gigs in 2014.

But in the end, it's KB's musical universe that, once entered, you never really leave. I think she genuinely warrants the word 'unique'. While it's far-fetched to say anyone truly arrives in the arts 'fully formed' - who stops developing as soon as they start? - she has a sound that is wholly hers, not bearing any obvious influences. And you could equally argue that, while she is inspirational to artists that came after her, she is not necessarily that influential either - perhaps because no-one can come close to doing what she does. But what is it?

For many years, it seemed KB wasn't interested in looking back on anything. The compilation I mentioned previously, 'The Whole Story', is one of the oddest albums of its kind. The idea came from the record company, and KB was initially ambivalent - however, it gave a home to the terrific stand-alone single 'Experiment IV', and she included an updated version of 'Wuthering Heights' that reflected her deepening vocal style.

However, it feels like a modest, almost apologetic affair. There are only 10 other tracks, including three from 'Hounds of Love', whose purchasers this was aimed at. The gorgeous packaging, in its vinyl gatefold, included images of all her single sleeves - so to this new fan, it was perplexing that so many of these A-sides, paraded before me on the artwork, weren't actually on the LP. Even its name was clearly, cruelly misleading. Ultimately, of course, none of this mattered, because from its first to last note, 'The Whole Story' is a captivating and utterly cohesive listen. Its teasing brevity only made me more eager to explore the back catalogue.

After 'The Whole Story', her music carried on inhabiting its own world, but just took longer to reach us. Four years' wait apiece for 'The Sensual World' and 'The Red Shoes', then a heroic 12-year gap before 'Aerial' arrived in 2005. In 1990, everything up to 'Sensual World' was collected in a box called 'This Woman's Work' - literally, a case with the existing CD issues inside, plus B-sides on an extra couple of discs. While this really was 'the whole story' at the time, it still seemed a Kate-free exercise, more product than project.

While it sounds potentially dismissive or clichéd to refer to the pre-'Aerial' hiatus as a parenting sabbatical, it's massively significant to the music, as Bush's son Albert (or Bertie), born in 1998, has become a key figure in his mum's creative life. 'Aerial' includes a song about him, but more than that, he encouraged her to perform live again and took an onstage role in the show itself.

Parenthood, or the idea of regeneration/renewal - or even the thought of simply passing the baton - whether these matters carry any weight at all, I can only speculate. But somewhere along the way, KB has re-engaged with her legacy. First, in 2011, the fascinating 'Director's Cut' appeared, featuring reworked versions of older songs - but only from the 'Sensual World' and 'Red Shoes' albums, as if nothing else needed tweaking. And as if to quash any thoughts that this re-tooling was somehow disguising a dearth of new material, she released the lovely '50 Words for Snow' eight months later. (The last time two Kate Bush records appeared in a single year was 1978.) Both new albums appeared on Fish People: still part of EMI, but a new label - boasting highly distinctive visuals and production values - solely created for Bush's own music. At last it felt like the artist herself was part of the process again, little by little - for want of a much, much better phrase - 'taking back control'.

Then, hallelujah! With relatively little fanfare, November 2018 brought two comprehensive box sets of remastered reissues (or four boxes if you prefer vinyl). Just like that. When I first saw them advertised, I couldn't quite believe it. The approach seemed carefully thought out, too. Box 1 contains all the albums, no frills, from the debut through to 'The Red Shoes' - to many, this is the Imperial Phase. The best known albums, with the best known songs, and more. Some people will be very happy with just this first treasure trove.


Box 2 seems geared more towards the completist: it gathers up the remaining three albums, throws in the live album of the 2014 shows as a bonus, and - most importantly - has a magnificent, updated 4-CD compendium of 12" versions, B-sides and covers. This time, the whole enterprise feels like a labour of love. Winningly, the remastered albums are all available individually, too, for those who might want to dip their toes into the water and wade in gradually, rather than plunge in with a deep dive. Could I draw your attention to two of these in particular?

'Hounds of Love' is likely to be the Kate Bush album that, ultimately, is best remembered by the most people. Perhaps this is partly due to the way it arrived - the massive hit 'Running up that Hill' placed KB right back in the public eye after something of a 'wobble' (more below), and created the appetite for an album that more than lived up to the single's promise. The LP also seemed to bottle that essential Kate-ness for keeps: side one had all the singles, a synth symphony of warm, intelligent melody, while side two had the brilliantly-realised 'The Ninth Wave', a suite of songs about a woman adrift in the sea awaiting rescue. It was as if KB was physically split between pop and prog, able to bring together her affinity for both the catchy and conceptual (not that the two are mutually exclusive).
As much as I adore 'Hounds of Love', its effortless beauty makes it feel almost serene, like the eye in the middle of a creative storm. My two favourite Kate albums are the ones either side of it: 'The Dreaming' from 1982, and 'The Sensual World' from 1989.

Even within such a singular body of work, 'The Dreaming' stands out as something other. It's the record where KB first assumed more or less complete creative control, helped no doubt by being an early adopter of the new Fairlight synthesiser. On her first three albums, however unusual the songs, you still broadly have the sense that there's a band in the room. Listening to 'The Dreaming', you're not even 100% sure there's a band. Or a room. Suddenly, there are noises as well as notes, cavernous atmospheres, intense clatter. The piano is still in there somewhere to give proceedings a vaguely earthbound feel, and there are plenty of tunes - but we're at arms-length, listening to something play itself out.

So much of the album seems to be about release or escape (there's even a track called 'Houdini'), often by visceral or explosive means - blowing up the safe in 'There Goes a Tenner', or detonating the grenade in 'Pull Out the Pin'.

There's a fair amount of 'key' imagery, nicely doubling as a musical reference as well as an unlocking motif. One song instructs us to 'Leave it Open'; another to 'Get Out of my House'. While this could all be interpreted as an artist breaking free of expectations or restraints, there's something else, too - a kind of prototype multiple music personality, as if characters are at war in Bush's head. She puts on a lot of 'stage voices' - the sinister creep in 'The Dreaming', the 'Lahn-dahn' geezer in 'There Goes a Tenner', the childish wails and distorted confidences of 'Leave it Open', the anguished screams in 'Pull Out the Pin', the death-metal growl about a minute into 'Houdini'... you never know who, as well as what, might be around the corner. The most gentle track - one of my desert-island Kate songs - is 'Suspended in Gaffa', which still depicts the narrator pushing against restraints. I love the way the whole record is so questing - and the more settled 'Hounds of Love' seems to provide an answer.


('Suspended in Gaffa', from 'The Dreaming')

I wonder if, after attaining such equilibrium with 'Hounds', 'The Sensual World' functions almost as an 'anti-Dreaming': particularly with 'The Ninth Wave' and 'Cloudbusting', KB had stepped outside what was happening to her characters, and now perhaps it was time to look more deeply inward again. But 'The Sensual World' doesn't display the tumult of 'The Dreaming'. Here the heart is unquiet, rather than the head. It begins with the title track's ecstasy (based on the erotically-charged closing passages of Joyce's 'Ulysses), then the euphoria of 'Love and Anger' - a song I think is much under-rated but really brings to life the slow-building tension of the lyric's 'two strings beating'.

Beauty is as constant a feature on this album as terror was on 'The Dreaming'. 'Reaching Out' is such a modest song, but with its string arrangement still stretches out for the stars. The Trio Bulgarka guest on three tracks, and give the album some further unity: who but KB would have thought to deploy their traditional/natural harmonies during the lines given to a sentient computer in 'Deeper Understanding'? The intervals are of course slightly 'alien' to our ears, so fit perfectly with the song's intent to humanise the machine while maintaining its difference. 'Rocket's Tail' has the best of both worlds, with a spine-tingling opening featuring only vocals (Bush plus the Trio) before launching into thunderous drums and rock guitar.

As ever, KB avoids the straightforward, looking at matters of the heart through a typically distorted lens: protecting a couple from a potential intruder in 'Between a Man and a Woman', accidentally smooching with Hitler in 'Heads We're Dancing'. Both these songs illustrate the situations musically with brittle, off-kilter rhythms, but they are content to sow unease, rather than - as on 'The Dreaming - tear the house down.

I'm aware that I'm drawn to unrest in music (could help partly explain why I'm into both opera and extreme metal....) - and I love the fact that these two albums flank an arguably 'perfect' record, the former releasing the demons getting in the way, and the latter - older, wiser - controlling them. I asked the question earlier - what exactly is it Kate Bush does? As well as writing and performing such sublime music, I think that nobody has walked this particular tightrope as successfully - to remain an enigma, utterly true to themselves, yet produce work so personal and visceral it feels to the listener like you are being let in, granted access to their innermost secrets. For that, she'll remain endlessly fascinating.